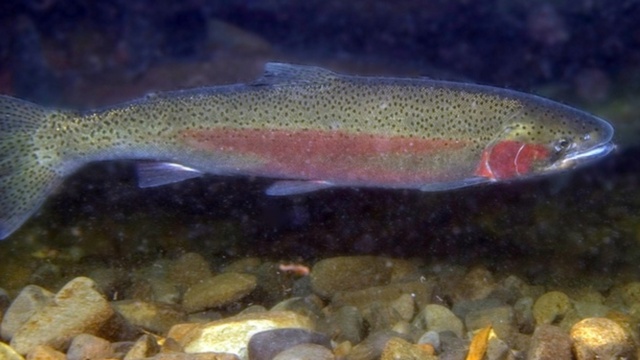 steelhead trout in an Oregon stream. A new agreement restores buffer zones along streams where pesticides cannot be sprayed. | credit: Oregon Department of Fish and Wildlife

“The agreement provides more certainty to farmers about how to protect fish. We know that our Northwest farmers and growers are good land and water stewards,” said Kim Leval, executive director of the Northwest Center for Alternatives to Pesticides, whose lawsuit along with other environmental groups prompted the agreement to restore the regulations on a temporary basis.

The center first sued the EPA 14 years ago, claiming the federal agency that regulates pesticides failed to consult with the National Marine Fisheries Service about how many different pesticides affect salmon. A settlement of that case resulted in a 2004 court-ordered injunction that first established the streamside buffers.

After that injunction expired, NCAP and other groups sued again in 2010, claiming the EPA failed to adopt permanent protections required by the fisheries service.

“It’s a long struggle to protect fish that really can’t wait to be protected,” Leval said.