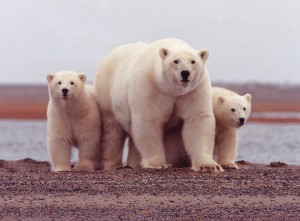 According to a release put out Tuesday morning by the United States Fish and Wildlife Service, a plan has been crafted by a diverse group of stakeholders that includes 35 representatives from Federal agencies, the state of Alaska, the North Slope Borough, Alaska Native organizations, industry and non-profit organizations and the Canadian Wildlife Service, to guide Polar Bear conservation in response to the 2008 threatened species determination.

“We are working with our partners here in Alaska, throughout the US, and internationally to address all threats to polar bears,” said US Fish and Wildlife Service regional director Geoffrey Haskett. “The team we have convened to develop the United States conservation management plan includes a diverse array of perspectives about polar bears, but the one thing everyone can agree on is that polar bears should be conserved, the question is ‘how?’”

The new plan being crafted, will meet the legal obligations under the Endangered Species and Marine Mammal Protection act’s and will contribute to a global plan being drafted by the parties to the 1973 agreement on the Conservation of Polar Bear.

Called the Polar Bear Recovery Team, the team’s goal is to have the draft plan available for a 60 day public comment period in the late fall of 2014. The final plan will be ready for presentation to the international partners during their 2015 meeting.

“The service received over 700,000 public comments during the listing process, so we know the public has a great interest in the fate of polar bears,” Haskett said. “The public will have a similar opportunity to weigh in on how we continue to conserve and manage polar bears into the future as outlined in the plan.”

A public announcement will be issued when the comment period opens on the draft polar bear conservation management plan.