WASHINGTON — Chelsea Barnes, 20, is a Native American working on Capitol Hill this summer for a government that doesn’t recognize her heritage.

Barnes’ boss, Rep. Tom Cole, R-Okla., was among those who voted against her tribe’s federal recognition. Ten years after the bill failed, Cole, a member of the federally recognized Chickasaw Nation, came face-to-face with his decision.

A member of the Lumbee Tribe of North Carolina, Barnes began her summer job in Cole’s office on June 3 as part of the 2014 Native American Congressional Internship. Run by the Morris K. Udall and Stewart L. Udall Foundation, the 10-week program is designed to teach indigenous students about the federal government.

“I just see it as an opportunity to represent my tribe in the office,” said Barnes, a senior at the University of North Carolina at Chapel Hill. “Sometimes you don’t have to say anything. Just being there helps.”

Cole is one of seven members of Congress with interns from Barnes’ program this summer. 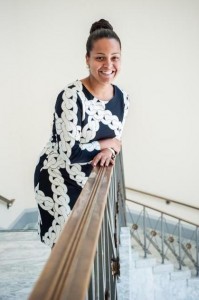 Chelsea Barnes, 20, a member of the Lumbee Tribe and a senior at the University of North Carolina, studies Political Science and Communications and is interning with Rep. Tom Cole of Oklahoma. Cole is a member of the Chickasaw Tribe. ANDRE CHUNG — MCT

Two out of the 12 students in this program are from a tribe seeking federal recognition. Both are Lumbee. Joined by Anthony “AC” Locklear, a first-year student at UNC School of Law, Barnes’ arrival on Capitol Hill falls weeks after the Interior Department’s Bureau of Indian Affairs proposed a revision to the 35-year-old federal recognition process for tribes. It’s intended to make the process more transparent and efficient.

If the Lumbee Tribe were to receive federal recognition through the Bureau of Indian Affairs, Cole said, his opinion could be different. That’s “the best way to go,” he said. “If they went through that process and signed off on (federal recognition) I wouldn’t have a problem with it.”

Locklear, who is interning with the Bureau of Indian Affairs, said the revised system could be a step toward this status for his tribe, which has petitioned for federal recognition since 1987. The prospect instills in him a newfound sense of hope, he said.

“I feel like it’s good timing that Chelsea and I are here in D.C., ‘infiltrating the system,’” Locklear said with a chuckle.

Although both Locklear and Barnes said they do not plan to fight for federal recognition this summer, “just being a face helps a great deal,” he said.

Cole’s resistance to granting the Lumbee Tribe federal recognition through Congress is not unique. When legislation for the tribe’s federal recognition came before Congress in 1989, the measure failed to pass both chambers. Yet Cole’s opportunity to meet with a member of the tribe is distinct, Locklear said.

“A lot of (lawmakers) have never met Lumbees and if they have, it’s only in the political arena,” Locklear said. “Being able to put such an innocent face, in Chelsea, behind our tribe will hopefully help them not be so opposed when they see Lumbee students who are really doing work for the other tribes as well.”

Such interactions between indigenous students and politicians elucidate the purpose of the internship, said Jane Curlin, director of Education Programs for the Udall Foundation.

She said an intern from the program could be “the first American Indian” someone in Washington has ever met. “Raising the visibility of how wonderful these native students are _ how accomplished they are and how much they have to offer _ I think is really important in Washington, D.C.,” Curlin said.

Over the course the program, all 12 interns _ each of whom works in separate offices across the three branches of government _ will periodically come 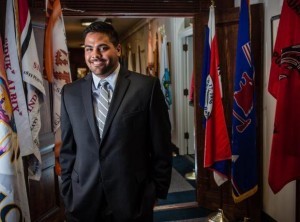 Anthony Locklear, 22, a member of the Lumbee Tribe, is a 2nd year law student at the University of North Carolina and is interning this summer at the Office of the Assistant Secretary of the Interior Indian Affairs. ANDRE CHUNG — MCT

together to meet with senators and tribal leaders. Cole, who took an intern from this program for the first time this year, said he hopes the experience will enrich the diversity on Capitol Hill.

“I think too many other tribes have not taken the opportunity to directly impact the federal government,” he said. “They need to be actively engaged. Hopefully a lot of them will think about running for office themselves. I’d like other tribes to have that kind of opportunity to understand they can, indeed, shape the process.”

The interns’ first so-called “enrichment program” was a June 4 meeting with Sens. Mark and Tom Udall, of Colorado and New Mexico, respectively. Both are sons of the namesakes of the Udall Foundation, a congressionally established group that promotes programs for the environment and about Native Americans.

Morris Udall, Mark Udall’s father, and Stewart Udall, Tom Udall’s father, were ardent environmentalists who both served in the U.S. House of Representatives. Stewart Udall also served as secretary of the interior under Presidents John F. Kennedy and Lyndon Johnson. Their sons have been proponents of various Native American communities while in Congress.

“It’s nice to see that we’re carrying on that legacy as well as they are,” Locklear said.