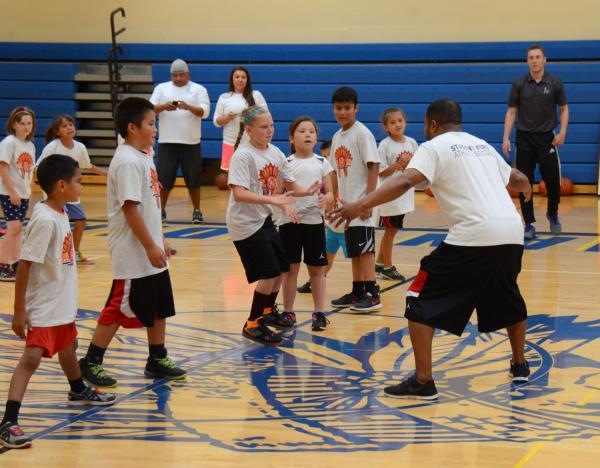 The gymnasium floor at Paschal Sherman Indian School on the Colville Reservation was filled with young basketball players, dozens of players, all between the ages of 6 and 11. Each wore a T-shirt which will become a prized possession.

Older players, from 12 to 18, would fill the gym the following day. One-hundred-and-thirty kids, boys and girls, would attend during the two days.

Former NBA basketball player Craig Ehlo was also there to talk with them and sign autographs, but the day and Ehlo’s presence was about much more than just basketball. It was also about drugs and the negative impacts they can have on one’s life and how a passion for sport can help avoid those negatives.

The clinic was jointly sponsored by The Healing Lodge of the Seven Nations in Spokane and a Seattle organization called A Plus Youth Program. Dr. Martina Whelshula is Executive Director of the Healing Lodge and she commented on how the two programs have complimentary missions and similar programs in many respects. The Healing Lodge works primarily with Native young people dealing with drug addiction while A Plus uses sport to surround kids with character development, mentoring, and educational services.

During the day the youngsters were asked to answer a brief 6-question survey. “It’s an assessment tool to measure the risks of addiction for children,” Dr. Whelshula explains. “There’s an adult there to help if they have questions about the questions.”

“Harvard Medical School folks attended one of our clinics on the Spokane Reservation,” Dr. Whelshula said. “They loved it and thought it was an amazing tool on so many different levels.” So now the information gathered at the basketball clinics is sent to Harvard, they analyze it, and it’s returned to the tribe and Indian Health Service.

Tavio Hobson, Executive Director for A Plus, founded the organization five years ago with funding coming mostly from private individuals, grants and corporate sponsorships. They have some major contributors and are expecting significant growth in coming years. “One of the goals was to look at ways we could continue to expand programming in areas where there was high need and have folks with similar visions, passions, and missions. Areas where we felt we could make a significant impact. That’s where our Native Initiative came from. Our ultimate vision is to have this program on every reservation.”

They will be going to New York City this fall. “There are 60 to 70 thousand kids in public high schools with zero access to sport. They need mentoring support, including character development, financial literacy, leadership skills and implement substance resistance and prevention, in addition to adding sports,” Hobson explained.

Speaking of partnering with Healing Lodge, he said, “We want the exact same thing for Native youth. The power of sport is transformative. Being able to tie in with the Healing Lodge and their expertise, especially around substance abuse resistance, education, and prevention is something we’re passionate about.”

Three more reservations in the northwest, Umatilla, Kootenai of Idaho, and Kalispel, will have similar basketball clinics this summer. Puyallup has already signed up for the next fiscal year which begins in September. There is no charge to tribes. It’s funded with a grant from Indian Health Service. “Now that funding is done, this is where sustainability comes in because of our partnership with A Plus Youth Program and their financial backing. With the merging of the two programs we can go national,” Dr. Whelshula said.

The interaction with professional athletes adds to the excitement for the youngsters. “Just about every professional athlete out of Seattle who played basketball has supported us at one time or another,” Hobson said. Magic Johnson was keynote speaker at a dinner two years ago, talking of the need that exists in many communities across the nation.

Craig Ehlo encouraged the youngsters at Paschal Sherman Indian School to develop a strong work ethic, as he did in watching his parents and which carried over into his basketball career. “Listen to your parents and to others like your coaches. They have wise words for you. Everything you learn now is going to shape your life.”

Dr. Whelshula and Hobson strongly agree that to reach young people one needs to start with what the kids are passionate about. “You’ve got to go meet them,” Hobson said. Sport is one of those passions for many young people.