1. This picture of cheerleaders 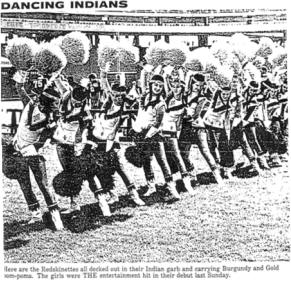 From the decision: “The Redskinettes also had appeared wearing costumes suggestive of Native Americans, as shown in the 1962 photograph of them reproduced below, which contained the title ‘Dancing Indians’ and the caption ‘Here are the Redskinettes all decked out in their Indian garb and carrying Burgundy and Gold pom-poms.’”

2. This picture of the marching band 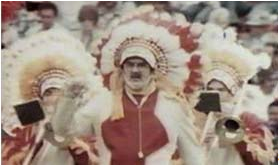 From the decision: “The Washington Redskins marching band had worn Native American headdresses as part of its uniforms between the 1960s and the 1990s, as shown in the image below from the 1980s.” 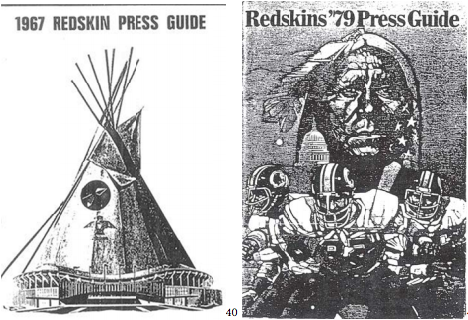 From the decision: “Between 1967 and 1979, the annual Washington Redskin press guides, shown below, displayed American Indian imagery on the cover page.”

4. Its similarity to other racial slurs

The decision cited an excerpt from the 1990 book “Unkind Words: Ethnic Labeling from Redskin to WASP”:

Nearly half of all interracial slurs …refer to real or imagined physical differences. … Most references to physical differences are to skin color, which affirms what we have always known about the significance of color in human relations. Asian groups were called yellow this and that and Native Americans were called redskins, red men, and red devils.

5. The dictionary definition of Redskins

We further note the earliest restrictive usage label in dictionary definitions in Mr. Barnhart’s report dates back to 1966 from the Random House Unabridged First Edition indicating REDSKIN is “Often Offensive.” From 1986 on, all of the entries presented by Mr. Barnhart include restrictive usage labels ranging from
“not the preferred term” to “often disparaging and offensive.”

6. The opposition by the National Congress of American Indians

The decision cites a 1992 resolution from the organization:

[T]he term REDSKINS is not and has never been one of honor or respect, but instead, it has always been and continues to be a pejorative, derogatory, denigrating, offensive, scandalous, contemptuous, disreputable,
disparaging and racist designation for Native American’s

7. Letters of protest from Native Americans

Since you continue not to believe that the term “Redskins” is not [sic] offensive to anyone, let me make this clear: The name “Redskins” is very offensive to me and shows little human interest or taste…If you think you are preserving our culture or your history, then may I suggest a change? To live up to your name, your team would field only two men to the opponents eleven. Your player’s wives would be required to face the men of the opposing team. After having lost every game in good faith, you would be required to remain in RFK stadium’s end zone for the rest of your life living off what the other teams had left you. (Which wouldn’t be much.) Since you would probably find this as distasteful as 300,000 Indians do, I would suggest a change in name. In sticking to your ethnic theme, I would suggest the Washington Niggers as a start. … This would start a fantastic trend in the league. We would soon be blessed with the San Fransisco [sic] Chinks, New York Jews, Dallas Wetbacks, Houston Greasers, and the Green Bay Crackers. Great, huh? Mr. Williams, these would be very offensive to many people, just as Redskins is offensive to myself and others. You can take a stand that would show you and the team as true believers in civil rights, or you can continue to carry a name that keeps alive a threatening stereotype to Indian people. People, Mr. Williams. We don’t want the Redskins!