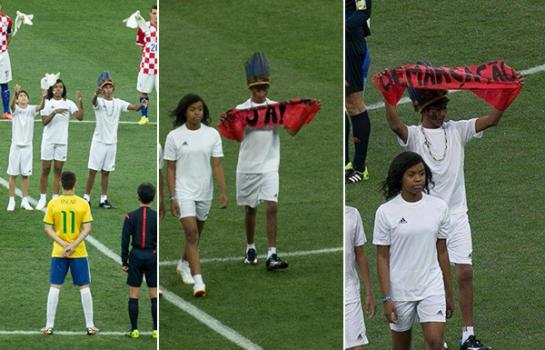 At the opening game of the 2014 FIFA World Cup, played in Sao Paulo on June 12, a 13-year-old Guarani boy raised a banner in support of Indigenous rights, but according to reports his gesture was omitted from the broadcast.

Thank you, internet, for making sure it wasn’t completely lost.

The boy, named Wera Jeguaka Mirim, was one of three youths chosen to release doves just before kickoff of the game between host nation Brazil and Croatia. Wearing a feather headdress, Mirim, from the Krukutu village in the city’s Parelheiros area, was meant to symbolize the Indigenous people of Brazil. After the birds took flight, Mirim reached into his pocket, removed a rolled-up red banner, and held it above his head for the crowd to read its message: “Demarcacao Ja!” or “Demarcation Now!”

The slogan is tied to protests against legislation that would allow the Brazilian congress, and not the Federal government, to determine the borders of Tribal lands, and would likely result in the shrinkage of some reservations.

Left out of the broadcast, the protest might have gone unnoticed by the global audience if not for the nimbleness of bloggers and the power of social media. Photos were posted to the Facebook page of Comissão Guarani Yvyrupa – CGY, a pro-Guarani group; in turn, both Huffington Post and Buzzfeed picked up on the story.