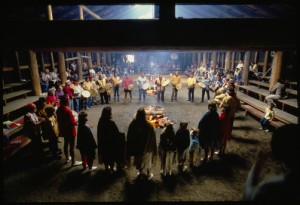 The people enter the longhouse led by an important visitor carried on a bed of ferns, cedars boughs, and salmonberries. As the people enter they announce that our visitor is hikw siyab yubech, Big Chief King Salmon, gathering around him in the center of the longhouse, rejoicing in his return and the promise he represents. The annual Salmon Ceremony celebrates the return of the King Salmon, the first salmon run of the year. It is a time for the people to all share in the first returning salmon. It is here that the yearly blessing of the fishermen takes place, praying for their safety and a bountiful season. 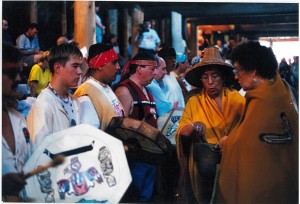 “We are thankful the fishermen have made it through another season. This is the reason we have the blessing of the fishermen, we ask the Great Spirit to bring them home safe, and ensure a good salmon catch,” said longtime ceremony leader, Stan Jones, Scho-Hallem.

For 24 years, my entire life, I have been raised with the salmon ceremony. I have attended all but one, and do not see myself missing any others. When practice starts, it is my favorite time of the year. For two months before the actual ceremony, families come together every week to share a meal, share the teachings, and share the songs and dances. I take great pride in seeing the ceremony continue and grow, and I am grateful to be a part of it. I’m thankful to carry on the work so many have handed down, thankful to see the familiar faces, and glad to see new faces. 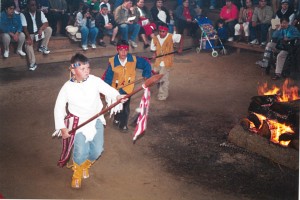 Me, Andrew Gobin, leading the Snohomish War Dance for the first time in 1997. Derek Jones and James Whitebear follow.
Photo courtesy of Stan and JoAnn Jones

Glen Gobin, Tee-Chulh, who leads the ceremony today said, “This is the first year we have entered with the welcome song and not been able to fit everyone around the longhouse floor.”

In my lifetime, the number of participants has steadily grown. But over the last four or five years, many young people have started to come to practice, and continue to return year after year. This could not have been possible had the Salmon Ceremony been lost, as it almost was. Revived in 1974, thanks to the work of Harriet Shelton Dover, Morris and Bertha Dan, Molly Hatch, Daisy Williams, Stan and JoAnn Jones, Bernie and Delores Gobin, Neil Moses, Louie Moses, Bobby Moses, and many more, the ceremony continues today. 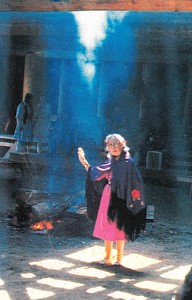 Harriette Shelton Dover speaks about the history of the salmon ceremony and how it was revived. 1976
Photo courtesy of Stan and JoAnn Jones

The Salmon Ceremony continues today. It is as much a place for learning as it is a place for celebration. During the weeks’ prior practices, families gather to teach new participants, ranging from small children up to their grandparents, the songs and dances, and what they mean literally and what they mean for our people. Many cultural values are discussed at practice as well, working to preserve the essence of our culture along with the songs and dances.

“We remember an almighty Creator, that we call, in our language, Dukwibulth. Dukwibulth created all the earth, all of its people. He created us. He created the salmon for our use,” said Hiyultsa.

We depend on the salmon in many ways for local economies and for cultural subsistence. One of the many teachings brought out at the ceremony each year is the importance of our visitor. 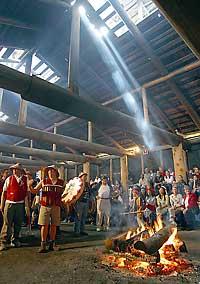 “He is a scout for the salmon people,” said Tee-Chulh. “If we treat him with respect, if we receive him in a good way, and if we acknowledge his sacrifice for us to eat, he will return to the salmon village and tell his people that we are good people. And we will have a good fishing season that will sustain us through the year.”

“He is our grandfather,” added Patti Gobin, Squatalq, Glen’s sister who passes down the teachings she received from Hiyultsa at each practice. “Long before we were human, we were the salmon people. We still call ourselves the salmon people. Our grandfather allowed us to become human so long as we remembered who we are and where we come from. And so he comes every year to see if we remember and to see how we live our lives.”

His return symbolizes the return of a healthy salmon run, which our people depend on to survive, in many ways; as a source of income, and as a primary food source. A ceremonial feast to honor and celebrate that begins with the sharing of a small piece of fish and a drink of water, symbolic of everyone sharing in the salmon returning and the life that the water provides for our people.

For a few years now, the issues of climate change and environmental preservation and protection have been talked about on the long house floor at the salmon ceremony. Today, in the State of Washington, there is legislation being moved that would make regulations on industrial pollution more lenient. That legislation has direct impacts on the salmon and the people that depend on them.

“That piece of fish that we share in, that small amount we will all eat, that is equal to what the state is saying you can eat in a month without health risk. That’s not just us [Indian people], that’s everybody. And so, when we as tribes fight this, we do it for everyone,” said Tee-Chulh.

The Tulalip First Salmon Ceremony is about many things, but above all is the importance of culture. Our culture, the culture of the salmon people, extends far beyond our traditional customs to the values placed on caring for the environment and respecting the natural world. My grandfather, Bernie Gobin (Kia-Kia), always talked about respecting our resources, not taking them for granted. 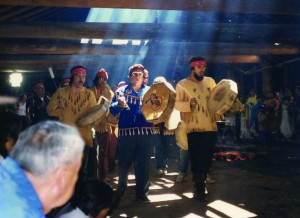 Ray Fryberg Sr., Sdatalq, often shares a story that I appreciate. He was fishing with his grandmother, and there were lots of fish around, but his grandmother only ever caught enough to fill her small canoe and went home. When he asked why she didn’t stay and take more salmon home to sell or to keep, she simply replied that she left them so they would be there tomorrow.

The value in that story is to make sure there is enough salmon, enough of any natural resource, for tomorrow, for the next generation. That doesn’t just mean not overharvesting, it means protecting the environment so that the resource continues to not only survive, but thrive. If you take care of the resource it will continue to take care of you, and that is what salmon ceremony about today.