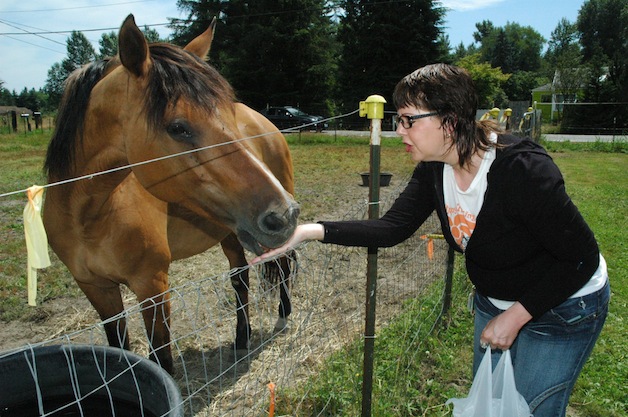 Sienna is fed by Colleen Chamberlain, weekend manager of the All Breed Equine Rez-Q, during its July 12 Kit-N-Kaboodle.
— image credit: Kirk Boxleitner

MARYSVILLE — Organizers deemed the All Breed Equine Rez-Q’s July 12 Kit-N-Kaboodle barbecue and raffle a success, but more fundraisers are needed, so an Aug. 16 open house at 2415 116th St. NE is planned.

Dale Squeglia, founder and president of the nonprofit group, explained that it needs a horse quarantine station that will cost about $20,000.

“And we’re not even close to having that amount of money,” said Squeglia, who pointed out that it costs $8,000 just to supply the horse rescue with enough hay for a year. “Our hay loft is almost down to nothing right now.”

One of the horses that will benefit from the horse quarantine station is Biscuit, whom volunteer Colbie Cooper explained is a descendant of the famous racehorse Seabiscuit.

Cooper gave visitors guided tours of the horse rescue’s stalls and pastures during the Kit-N-Kaboodle, and elaborated on the other needs faced by the horses.

“Blackberry is a miniature donkey who might be pregnant, so we need to have that checked out,” Cooper said. “If it’s a boy, we should call it Boysenberry.”

Sienna is a Western Trail riding horse who’s spent the past several months recovering from being ridden with a leg injury for years, while Toffee suffered from severe obesity. Many of the rescue’s horses, including Jim and Lucy, were abused by their former owners, while others were surrendered to the rescue because their owners no longer had the time or money to care for them.

In addition to money, the horse rescue could always use more volunteers like Cooper, who can be trained to perform basic tasks such as feeding and watering the horses, cleaning stalls, grooming and exercising them, sweeping the barn and cleaning the grounds.