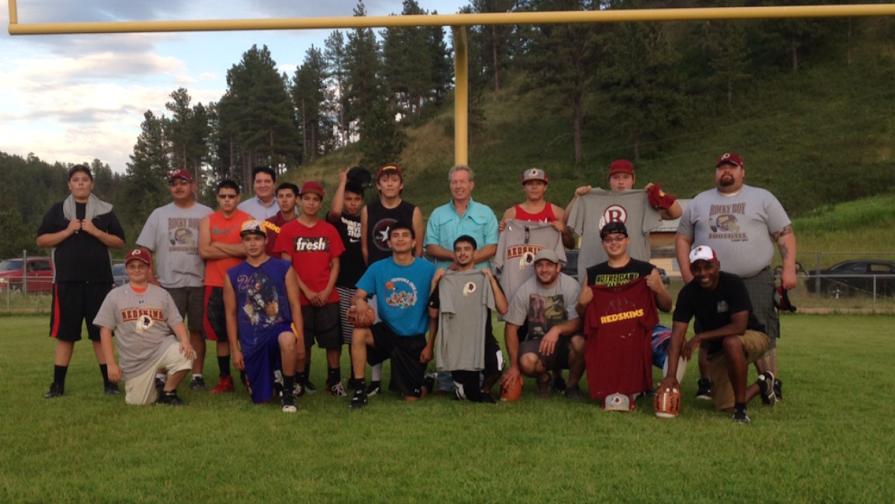 Moseley is in the middle. (Via RedskinsFacts.com)

Mark Moseley is one of the former Redskins players now engaged on the name issue, and he isn’t treading lightly when discussing this debate.

Moseley was on NewsChannel 8’s “SportsTalk After the Game” with Alex Parker this week, and the one-time kicker was fired up.

“It’s come up before, and it’s the most ridiculous thing that you could ever have” Moseley said of the debate. “We just thought it would blow over. But this time it hasn’t blown over. They’ve managed to get to some people that have a voice, some people with a little power, and they’ve made it into something that it’s not. And so we decided as alumni that we were going to get out and find out for sure. I mean, we don’t want to do something that’s hurting somebody’s feelings or it’s not the right thing … so we decided to take it upon ourselves to find out.

“I personally grew up with the Alabama-Coushatta Indians down in Texas,” Moseley went on. “They were 10 minutes outside of town. So I’ve been around Indians all my life, and when I came to the Washington Redskins it was elation in the reservation. They loved the fact that I was playing for the Indians. They considered it an honor.

“And so we were really upset with the fact that they’re trying to tell us that all these years we’ve been playing under a name that was derogatory to someone,” he said. “We’ve interviewed over a thousand people. We’ve talked to over a thousand Indians. And not one, not even one has said anything about it being derogatory to them. I even went up to one of them face-to-face that I didn’t even know, and I asked him, I said point blank, ‘If I came up and I called you a Redskin would you be insulted?’ And he said, ‘Absolutely not, I take great pride in being an American Indian, being called a Redskin.’ So to me, it’s bogus.”

Later, Parker asked Moseley what he thought about the people who have said they are offended by the name.

“If it was Indians, then I would be concerned,” Moseley said. “But everyone that’s said anything to me has been a white man or a black man. No red men have said anything derogatory to me about it.”

Parker also read Moseley some dictionary definitions indicating the word could be offensive.

“You can get offended by anything,” Moseley said. “I can get offended by what somebody’s saying to me. But the Redskins, if we start changing, to me they’re attacking my amendment rights that I have. To me, the name Redskins is something that does not offend anybody. The Redskins are not being hurt, the Indians are not being hurt by this, they’re telling us that. I mean, are we going to believe the white man or are we going to believe the Indian when it comes to a subject that is supposedly affecting them? They’re the ones we need to listen to. We need to pay attention to what they’re saying, and not what some of these other people are saying, and listen to where their hearts are.”

I don’t believe that’s actually true, although there certainly are several majority-Native American schools that use the name. Moseley also said some good has come out of the debate, because “we’ve found out how really deplorable” the conditions are for some Native Americans.

“And it’s ridiculous that we as Americans are letting them and making them, almost forcing them to have to live this way,” he said. “It was very much an eye-awakening trip for those of us that have not been on a reservation in a while.”

As for the suggestion that the Redskins were buying support on reservations, Moseley rejected that outright.

“The fact is that they need help and we’re giving it to them,” he said. “And we’re not trying to buy [them]. We talked to people before we even did anything for them, and we got the same answer. So that’s bogus. That doesn’t even come into the ballgame here. But we as alumni feel that it’s important that we make sure that if we’re going to follow this, and if the Redskins are going to continue to be called the Redskins, we need to make sure — and Mr. Snyder wanted to make sure — that no one is being hurt. And we found out that they’re not.

“I really get upset. I get mad, because people are trying to say that I’ve been using a racist name,” he said.