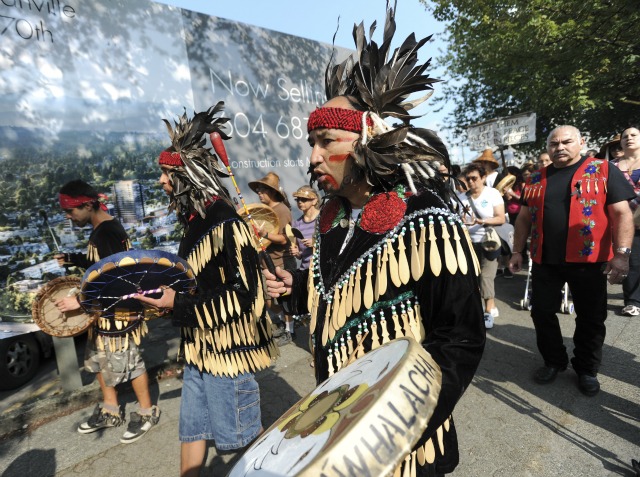 COAST SALISH TRADITIONAL TERRITORY, Aug. 9, 2014 – In a heartless and illogical move, the Department of Fisheries and Oceans is refusing to allow Secwepemc First Nations devastated by the worst mining disaster in BC history to apply some of their Section 35 fish for salmon to catches in Musqueam First Nation’s downstream waters.

The Secwepemc First Nations refuse to catch the salmon they rely on at this time of year because of the water contamination fears from the impact of Monday’s massive Mount Polley tailings pond breach, which sent millions of liters of mine sludge flooding into the rivers and tributaries in the Cariboo region at peak spawning season. First Nations are already finding dead fish in the debris field. Yet rather than recognize this and act out of common sense and decency, DFO is insisting any salmon caught in Musqueam waters before they head further up the water system must be counted against Musqueam’s quota.

Musqueam Chief Wayne Sparrow stated, “This event illustrates the difference between ancient First Nations cultures and the governments. When people are in need the First Nations response is: how can we help? We will invoke our traditional protocols and will respond to the Secwepemc people whose vital salmon resource is impacted. We simply respond to the needs of the Elders and Secwepemc Chiefs rather than apologize for the irresponsible actions of industry.”

On August 8th, the Musqueam held a teleconference with Chief Bev Sellars and Chief Ann Louie and offered to provide them with salmon from the mouth of the Fraser. Chief Wayne Sparrow stated, “it was a moving telephone discussion to hear of their loss and the fears that they have to collect salmon in their territory. We have great respect for the interior First Nations who hold the territories that incubate the eggs for all of our communities’ future use.”

Chief Bev Sellars from the Xatsull First Nation states, “we don’t believe the BC government’s water tests and have reviewed the list of toxic heavy metals that were released from the tailings dam earlier this week. The Provincial and Federal governments seem to be taking the position that the water tests are fine so no harm is done. They are doing their best to stand up for the mining industry and leave us in the background to suffer the consequences. Governments should not be apologists for the reckless acts of industry but should work to reassure and support the Elders need for salmon.”

MacLean’s magazine is calling the fears raised by First Nations as ‘eco-babble’ because now the initial water tests are not as serious as expected. Chief Ann Louie from the Williams Lake Indian Band states, “I challenge anyone to come up to our territory and look at this disaster and say everything is fine. We are talking about the respect for basic human dignity and telling us the water tests are fine and at the same time don’t go in the water confirms our fears that we should not consume the fish in the impacted area as a source of food for the coming winter.”

The Musqueam are asking for others to speak out against the government’s ridiculous position that penalizes any First Nation that attempts to help others in need. Regardless of this decision by governments we are committed to support these communities with healthy fish.

The Tsleil Waututh First Nation, a neighbour to the Musqueam, has also offered to support the Secwepemc people by providing fish.