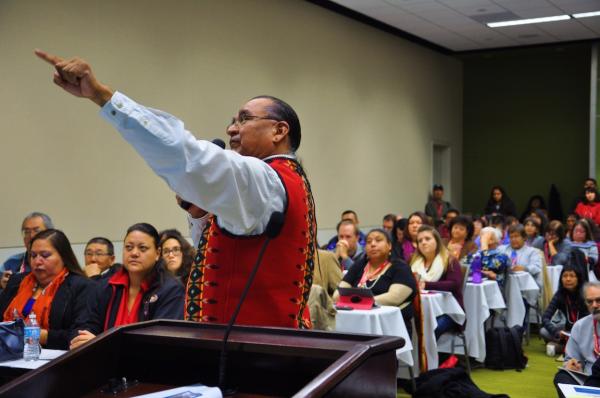 Julia Mitchell
A presenter at the NIEA Convention held this year in Anchorage, Alaska.

Consultation, accountability and transparency were the call-to-arms at the National Indian Education Convention held earlier this month in Anchorage, Alaska. This year’s conference, entitled “Building Education Through the Generations,” saw unprecedented attention from the federal government, including visits from Senator Jon Tester, Chairman of the Senate Committee on Indian Affairs; the director of the Bureau of Indian Education, Dr. Charles “Monty” Russell; and Bill Mendoza, Director of the White House Initiative on American Indian and Alaska Native Affairs.

Among the highlights of the convention was a speech by Senator Jon Tester of Montana in which he announced the introduction of new, comprehensive Indian education legislation that will improve Native education from early childhood education through post secondary, including bolstering language immersion programs, resources for teacher recruitment and retention in Native school districts, as well as streamlined and simplified funding applications, among other initiatives.

“Senator Tester has been listening and loudly heard the call of our educators,” said NIEA Executive Director Ahniwake Rose (Cherokee/Muscogee). “He came all the way to Anchorage to announce this new legislation, which is the first time a sitting chairman of the Senate Committee on Indian Affairs has acknowledged our membership in recent memory. This legislation is extraordinary for its wide-ranging scope of improvements to our schools.”

Also unique at this year’s conference were the “townhalls” hosted by the Bureau of Indian Education head Dr. Charles “Monty” Roessel (Navajo), who was appointed to the post in December 2013 by Kevin Washburn, Assistant Secretary of the Bureau of Indian Affairs. To underscore the importance of education to the BIA, Washburn’s chief of staff was also in attendance.

The townhalls served as a dialogue between Dr. Roessel, the BIA, and the NIEA membership that provided an opportunity for educators to voice their concerns and frustrations, as well as their successes and hopes for their schools and students for the coming years. Some of their requests included increased transparency and accountability in reforming Indian education; inclusion in planning and decision-making for their school districts; and additional, on-going consultations with the tribes in regards to the performance of the BIE schools.

“The tribes are in the best position to determine what’s best for our children,” said Rose. “We know that the BIE schools are underperforming and we are looking to strengthen our partnership with the agency to improve outcomes for all Indian students.”

“The fact that the DOE, the BIE and Tester are reaching out to us is huge, and it was great to have them at NIEA to engage at a national level,” said Rose. “We’re at a moment for Indian education. For the first time in 40 years, we have a U.S. President that has publicly addressed and supported Indian education. We have government agencies that are focusing in a way that has never happened before. So we want to build on this momentum to create a true turning point for our kids.”

Rose also said that among the most important priorities of the tribes is the ability to operate all title funds as they see fit on their lands. As the demand for education continues to increase, she added that Indian education should also encompass a worldview, which recognizes a global economy and the importance of a skilled and educated workforce in Native communities.

“Look at the natural resources located on our lands,” said Rose. “There is an enormous potential for educating our youth to harness the potential income from those lands in a way that the tribes can manage themselves, without having to rely on outsiders or be taken advantage of. We can’t afford to fail again.”

During his speech to the general assembly of this year’s convention, Senator Tester explicitly noted that community involvement with the inclusion of administrators, teachers and parents in collaboration with the government agencies are critical to improved outcomes in Indian education.

“I have no doubt that there is great promise in Indian education—and we have a responsibility to future generations of Indian Country to make the most of that promise. Not with cookie-cutter curriculums or endless bureaucratic red tape, but with community-driven solutions that teach our children not only to think, but think critically,” Tester told the audience. “No two tribes are identical, so it only makes sense that tribes need the flexibility to customize resources to fit the needs of their youth. Let’s work together to develop these solutions that improve the lives of Native children and young adults.”