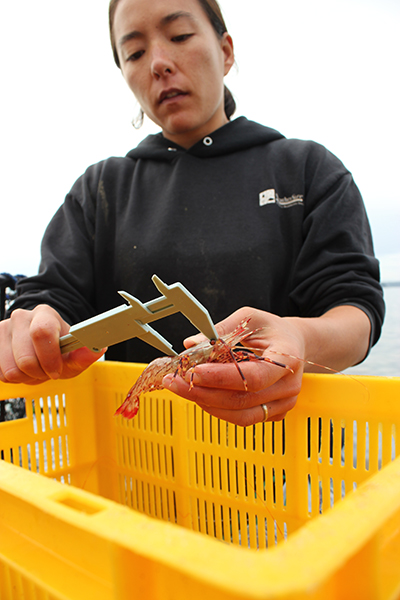 Margaret Homerding, shellfish biologist for the Nisqually Tribe, measures a prawn during the tribes shellfish surveys of South Sound.

A long-term study by the Nisqually Tribe is providing a better understanding of shrimp in South Sound.

“What shrimp populations are in the area is not well documented,” said Margaret Homerding, shellfish biologist for the Nisqually Tribe. “The state conducted surveys a decade ago, but did not catch any spot prawns.”

The tribe is dropping three shrimp pots every few months in various locations from the Nisqually Reach to lower Carr Inlet. Each pot location is tracked on GPS and any catch is recorded.

“We started surveying when we saw our crabbers pulling up spot prawns from their deeper pots,” Homerding said. “We are looking for all species of shrimp, but we’re focusing our efforts on spot prawns, which are the commercially valuable species.” So far, spot prawns and dock shrimp have been the most abundant species in the tribal surveys.

“The end result of the study should be a decision on whether there is a commercially viable fishery for the tribe on shrimp,” Homerding said. The research will help guide the tribe in creating an accurate harvest regime for co-managing shrimp with the state in South Sound.

Currently, the tribe splits a combined 3,000 pound quota for all shrimp species with non-tribal harvester, including 1,000 pounds for spot prawns. “There isn’t any commercial harvest by the tribe right now,” Homerding said. “Even with the few shrimp caught incidentally in crab fisheries, the tribe doesn’t come anywhere close to actually accessing those pounds.”

Part of the surveys include tracking the sizes at which shrimp change from male to female. Because shrimp change sex during their life cycle, the relative sizes of male and female shrimp can tell biologists a lot about the health of the local population. “If a population of shrimp is shrinking, we will see individuals changing sex earlier,” Homerding said.

Shellfish managers can consider the data the tribe is collecting now as a baseline for a healthy stock with little harvest pressure. “But, if we see smaller females in later years, we can assume they’re feeling the pressure to switch earlier, and we should reduce our fishing pressure,” she said.

The tribe is also tracking when shrimp are spawning. Usually, shrimp fisheries close when female shrimp are carrying eggs, protecting them from harvest. “There’s no reason to fish for shrimp when the next generation is at its most vulnerable,” Homerding said.

“Basic information that we’re collecting now will help guide harvest in the future,” said David Troutt, natural resources director for the tribe. “The Nisqually Tribe is committed to smart management that benefits both tribal and non-tribal communities.”