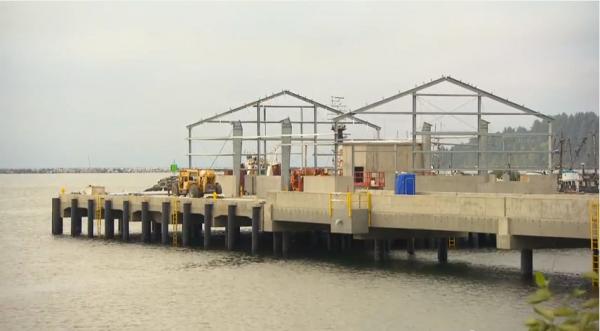 The Makah Nation’s new commercial fishing dock is 120 feet long, has two lanes, five offloading terminals, and an ice machine capable of holding 110 tons of ice, and is designed to withstand a 9.0 earthquake and a 15-foot tsunami wave.

“It’s going to be a huge plus to have all the catch come in at one dock,” dock manager Michael Lawrence said on the Northwest Indian Fisheries Commission website. “We’ve invited a flotilla of boats to tie up at the new facility as part of the celebration.”

The Makah Nation celebrated the opening of the $3.8 million dock with a blessing and ribbon cutting on October 10. The old dock had become unstable, and the Nation expedited its replacement – obtaining permits, demolishing the old dock and completing the new dock in less than a year.

“It is estimated more than 50 percent of the Makah Nation relies on income from fishing in some way and the dock construction has meant not only some jobs during construction, but a lasting improvement to the community that will pay for itself rapidly,” the NWIFC website reported.

Makah contributed $10.5 million toward the project.

A $1.1 million U.S. Department of Transportation grant will assist with the second phase of the project: an oil spill prevention and response dock that will extend beyond the current structure. Emergency response is critical in this area, where the Strait of Juan de Fuca meets the Pacific Ocean.

Every year, oil tankers, fuel barges and large commercial cargo, fish-processing and passenger vessels make about 3,000 transits into the Strait bound for Washington ports. From 1999-2014, an emergency tug stationed at Neah Bay assisted 49 ships either completely disabled or with reduced maneuvering ability.

Having a specific structure for the oil spill response vessels, including the emergency tug, will allow all the response vessels to be located in one place and will expedite their deployment, NWIFC reported. A crane on the completed dock is already allocated for industrial lifting to assist in oil spill equipment deployment.

“The crane can lift 10 tons and it was mostly with oil spill response in mind,” Lawrence said.