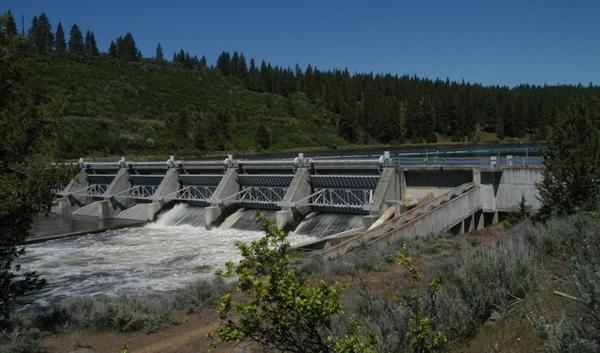 The J.C. Boyle Dam, one of four that the Interior Department has recommended for removal from the Klamath River. It runs through Southern Oregon and Northern California. | credit: Amelia Templeton

A long-negotiated series of agreements to manage water in the Klamath Basin in Southern Oregon and Northern California received Senate committee passage Thursday.

“This legislation is the result of a historic collaboration of efforts,” said Oregon Sen. Ron Wyden during the committee meeting.

Wyden was one of the four Oregon and California co-sponsors the Senate bill. It gives federal authorization for local efforts to ensure enough water for fish and wildlife, while providing predictable irrigation supplies for farmers and ranchers.

The Klamath agreements were signed by local stakeholders in 2010. They establish a hierarchy of water rights and present the possibility of removing dams owned by PacifiCorp. Congressional approval is needed to enact certain provisions.

The legislation gained broad bi-partisan approval in the Senate Energy and Natural Resources Committee. Alaska Sen. Lisa Murkowski supported the bill after the committee approved an amendment decreasing the role of the federal government in making dam-removal decisions.

“What we do… is ensure that the states of California and Oregon are empowered to decide,” Murkowski said.

Now the legislation faces the possibility of a full Senate vote in the coming weeks.