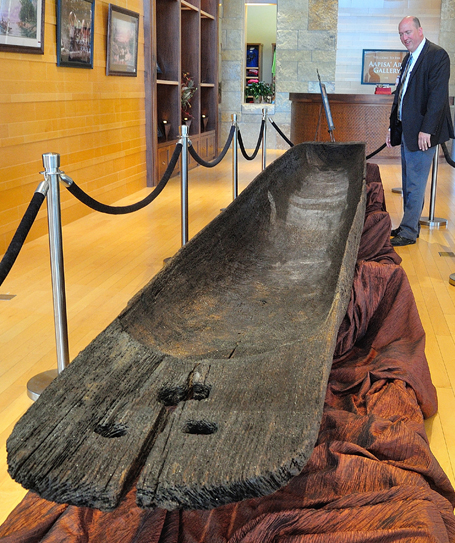 Chickasaw Cultural Center Director of Operations Brad Deramus admires a huge dugout canoe dating to approximately 1500 A.D. It is on loan to the center from the Department of Mississippi Archives and History to augment the world-class Dugout Canoes: Paddling through the Americas currently on display through May 6, 2015, at the Sulphur, Oklahoma, location.

SULPHUR, Okla. – They were the metaphorical pickup trucks of their day. Native Americans used them to ferry families across rivers, move trade goods to market and a means of travel.

Dugout canoes were difficult to fashion into water-worthy vessels. All were made from a single tree trunk, fire coals placed atop it and then the charred wood was hollowed out with an adze or similar sharp-edged tool made of stone, sea shells and, eventually, metal.

In 2000, a group of Florida high school students stumbled onto what is believed to be the largest treasure trove of dugout canoes in the world – 101 of them dating from 500 to 5,000 years old, according to experts.

That discovery gave birth to Dugout Canoes: Paddling through the Americas, a world-class exhibit on display at the Chickasaw Cultural Center through May 6, 2015.

More than 9,700 people have experienced the exhibit as of Nov. 1. An additional 6,000 have admired a Mississippi vessel displayed away from the main dugout canoe exhibit which is estimated to be 514 years old.

Window blinds are drawn almost like a secret is hidden in the Aapisa Art Gallery at the Chickasaw Cultural Center.

The lights are dimmed too, along with a sign warning visitors not to touch – a departure from many exhibits more than 300,000 people have enjoyed since the center’s opening in 2010.

Director of Operations Brad Deramus swings open the door and extends an invitation to step foot inside and behold an item made in 1500 A.D., discovered intact and preserved from a swamp in the Mississippi Delta.

Most likely the immense 26-foot long dugout canoe was made by Chickasaws.

It was discovered in Steele Bayou Lake in Washington County, Mississippi, decades ago. It is on loan from the Department of Mississippi Archives and History to augment Dugout Canoes: Paddling through the Americas.

Weighing in at more than 1,000 pounds., it is made from a single bald cypress tree and is manufactured in the ancient Chickasaw tradition. It is the perfect complement to Dugout Canoes: Paddling through the Americas, a display thrilling adults and children, Deramus said. Interactive kiosks, art endeavors, ancient canoes and signs abound encouraging visitors to touch many of the displayed items.

A 400-year-old pine tree dugout canoe, along with tools dating to 600 A.D. and remnants of some of the 101 dugout canoes discovered by the students are included in the exhibit. Many of the display items are hands-on. Some of the more ancient items are behind glass enclosures. CCC cultural experts are on hand to assist visitors who have questions.

While none of the 101 dugout canoes discovered by the Gainesville, Florida, students in drought-stricken Newnans Lake 14 years ago are displayed, remnants of some of the ancient vessels are at the Chickasaw Cultural Center to be enjoyed.

In fact, while some of the canoes discovered by students are fully intact, most were left in place at Newnan’s Lake because excavating them would prove destructive after centuries of protection by water and mud.

Efforts to establish a time to honor Native American Heritage began as early as 1916, when the governor of New York officially declared “American Indian Day” in May of that year. Since that time, a number of states have designated specific days or weeks to celebrate Native American heritage. Since 1976, Congress and the president have designated a day, a week or a month to honor American Indian and Alaska Native people. November has been set aside for the celebration since 1991, when a Senate Joint Resolution was passed authorizing and requesting the president to proclaim each month of November thereafter as “American Indian Heritage Month.”