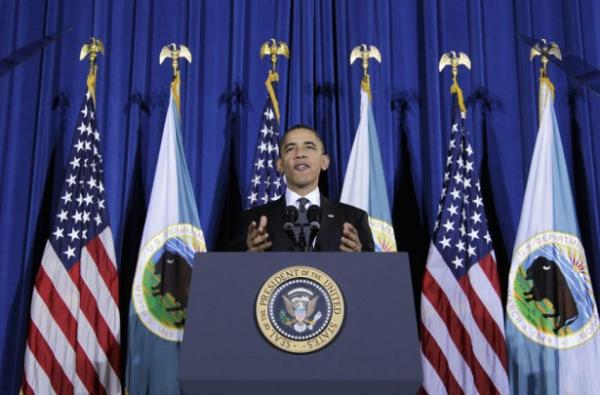 This coming Wednesday December 3, President Barack Obama will be hosting the sixth annual White House Tribal Nations Conference in Washington D.C. In addition to leaders and representatives of the 566 federally recognized tribes who will be attending, U.S. Secretary of the Interior Sally Jewell, Deputy Secretary Mike Connor and Assistant Secretary for Indian Affairs Kevin K. Washburn will join President Obama and other cabinet secretaries during the conference.

According to a U.S. Department of the Interior release, “Secretary Jewell will deliver remarks during the opening ceremony of the 6th annual conference and will join panel discussions on Indian education reform and climate change, along with other stakeholder meetings and briefings.”

Additionally, Connor will participate in discussions on protecting natural and cultural resources and Washburn will join sessions on government-to-government relations, economic development and upholding federal trust and treaty responsibilities.

Each year, the annual White House Tribal Nations Conference has provided tribal leaders the opportunity to interact with President Obama as well as with Secretary Jewell and members of the White House Council on Native American Affairs.

In an Executive Order establishing the White House Council on Native American Affairs in June 2013, President Barack Obama made the following assertions:

As we work together to forge a brighter future for all Americans, we cannot ignore a history of mistreatment and destructive policies that have hurt tribal communities. The United States seeks to continue restoring and healing relations with Native Americans and to strengthen its partnership with tribal governments; for our more recent history demonstrates that tribal self-determination – the ability of tribal governments to determine how to build and sustain their own communities – is necessary for successful and prospering communities. We further recognize that restoring tribal lands through appropriate means helps foster tribal self-determination.

This order establishes a national policy to ensure that the Federal Government engages in a true and lasting government-to-government relationship with federally recognized tribes in a more coordinated and effective manner, including by better carrying out its trust responsibilities. This policy is established as a means of promoting and sustaining prosperous and resilient tribal communities. Greater engagement and meaningful consultation with tribes is of paramount importance in developing any policies affecting tribal nations.

According to the Executive Order, the mission of the White House Council on Native American Affairs is to honor treaties, recognize tribal sovereignty and right to self-government in relation to such matters as promoting sustainable economic development, promoting greater control over health and health disparities, improved access to education and supporting tribal justice systems.

On Wednesday Secretary Jewell will offer her opening remarks at approximately 8:30 a.m. EST with additional panels on Energy and Climate Change at 2 p.m. EST and supporting Native Youth at 2:45 p.m. EST. President Obama is expected to offer closing remarks at the end of the day Wednesday.

This event will be livestreamed at www.doi.gov/live.