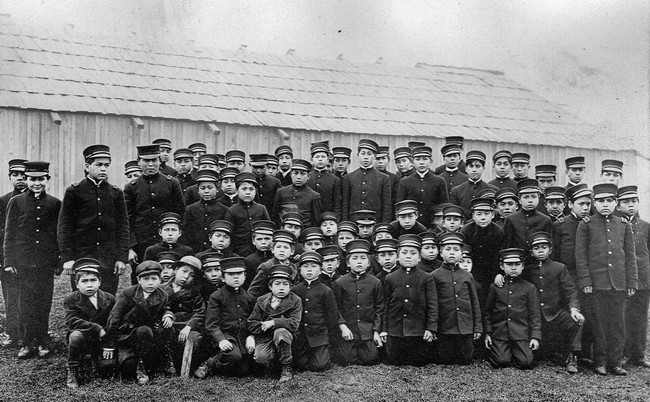 Photo courtesy Hibulb Cultural Center
Boys from the Tulalip Indian Boarding School marched in their uniforms to the longhouse for the Treaty Days celebration. It was the first day they were allowed to witness their culture without punishment.

By Andrew Gobin and Eric Stevick, The Herald
TULALIP — A man will come, following the path of the sun. His voice will be like thunder, and it will mark the beginning of a long, dark night for Indian people.Wayne Williams recalls hearing that prophecy as a young boy at the annual Treaty Days gathering on the Tulalip Indian Reservation.His grandfather, William Shelton, was the last hereditary chief of the Snohomish people. Shelton started the annual gathering, organizing the first in 1912.

More than a century later, Treaty Days continues, though it is not widely known, if at all, off the reservation. Tribes still gather each year at Tulalip to mark the signing of the 1855 Treaty of Point Elliott, remembering a time of worry and great change.

J.A. Juleen’s portrait of Tulalip artist and activist William Shelton was taken in 1913.
“He was adamant that Treaty Days was a commemoration, not a celebration,” Williams said of his grandfather. “The treaty really meant the end of our way of life. Hardly anything to celebrate. He wanted to commemorate it.”Treaty Days was started as a means to remember the traditional dances and songs, and to remind the children of their culture at a time when it was at risk of slipping away.Shelton believed in fostering good relations between Indians at Tulalip and their non-Indian counterparts. Throughout his life, he seized every opportunity to share his culture with people living in Snohomish County and across the nation. What he managed to pull off, during a time when Indian customs were explicitly outlawed, built the foundation for cultural revitalization on the reservation today.

A leader through change

Shelton, who was born at Sandy Point on Whidbey Island, left home at 17 to attend the mission school at Tulalip. His parents did not want him to go, fearing he would die, as many children at the school had from illness. He went anyway.

He learned English and became a bridge between worlds. His ability to communicate in both English and his Native dialects was crucial to preserving language. Shelton worked with noted linguist Herman Haeberlin in studying and recording Salish languages.

Photo courtesy Hibulb Cultural CenterJanuary 22, 1912
In a 1937 letter, the year before he died, Shelton mentioned that his people, the Snohomish, were among those already looking to adopt the ways of “civilization” at the time the Point Elliott treaty was signed. In 1922, the City of Everett purchased a story pole Shelton carved that is now part of the Hibulb Cultural Centercollection. That pole stood for decades along Rucker Avenue, one of the few pieces of public art maintained in a town that then took pride in smokestacks.“I was made happy because it showed that the White Friends realized that there was something good in the Indian ways and teachings,” he wrote.While he saw the value in education, Shelton did not want his culture erased by this new way of life.

In 1902, the federal government opened the Tulalip Indian Boarding School on the reservation in an effort to enforce assimilation policies. Children were removed from their families, from their culture. The same thing happened in the mission schools for 45 years prior. All things Indian were prohibited to the students. Shelton’s daughter, Harriette, attended this school and later in life described the sting of the strap when she was caught talking in her native language.

Photo by J.A. Juleen, provided by Everett Public Library. Members of the Tulalip tribe dine in the new longhouse on the Treaty Day in the 1914 photo.

To Shelton, the new government-run school presented an opportunity — albeit a circuitous route to save his heritage.

Shelton began by asking permission for the seemingly impossible. He sought to have a longhouse built on the reservation where sanctioned Indian dancing could take place. Repeatedly between 1908 and 1910, Shelton’s requests were denied by the Tulalip superintendent, Charles Buchanan, who as the local federal authority said that such customs were “blatantly at odds with Department of Interior regulations,” according to official correspondence.

In 1911, Buchanan tired of dealing with Shelton and told him to write letters outlining his requests to the secretary of the interior, as well as the commissioner of Indian affairs, the local agent’s superiors.

Shelton wrote them, asking for permission to build a gathering house for the people at Tulalip. He asked for one day a year when the people could come together and sing the old songs. He asked to allow the children from the Tulalip Boarding School to be brought into the longhouse.

Shelton proposed all this under the ruse of celebrating the 57th anniversary of the signing of the treaty on Jan. 22, 1855. The celebrations were to mark the start of their new way of life on the reservation, he said. Shelton wrote that the day would also be an opportunity to show children how poor and primitive the old ways were. In other words, he told authorities what they wanted to hear while masking his true intentions.

“He wanted the children to be reminded of who they were, the culture they come from,” Williams said.

Photo by J.A. Juleen, provided by Everett Public Library. Tulalip Longhouse exterior, circa 1914. William Shelton stands with and two associates who assisted in construction of the building.
Many family heads gathered with Shelton, pooling their money — a dollar here, two dollars there, a dime or two, and maybe an extra 50 cents — to buy food for the first potlatch in more than half a century. As the years passed, the feasts continued. A menu from the 1915 Treaty Days calls for four “sacks of spuds,” 30 salmon, coffee, tea, lard and a box of oranges. A menu similar to this is served at the gathering today.David Dilgard, a historian with the Everett Public Library, believes Shelton was a wise man facing a difficult predicament. Dilgard compares Shelton to Brer Rabbit, the trickster hare of African American and Native American origin who uses his wit to survive against bigger and more powerful foes.Convincing authorities to allow Treaty Days was much like Brer Rabbit goading the fox into throwing him into the briar patch, thus allowing him to escape.

Shelton wanted the tribes to be proud of their heritage in uncertain times.

It was Shelton saying: “You have to not be afraid to say ‘I’m an Indian, dammit,’” Dilgard said. “That is what Treaty Days was all about.”

Photo courtesy Everett Public Library. This photo taken to commemorate the Mukilteo Treaty Monument Dedication was taken on May 2, 1931, by photographer James C. Bailey. Wayne Williams is the small boy on the far right of the photo standing in a headdress.

A lifetime of memories

In a black-and-white photograph, taken in Mukilteo in early May 1931, there is a little boy in the front row wearing a grimace and Plains Indian feathered headdress. He’s surrounded by dignitaries, including Gov. Roland Hartley, U.S. Sen. Wesley Jones and even Kate Stevens Bates, the daughter of territorial Gov. Isaac Stevens. It was Stevens who led the treaty negotiations in 1855. Also in the crowd were state lawmakers, members of the Daughters of the American Revolution, a boy in a tricorn hat and pantaloons and a Colonial era-clad girl in petticoats, lace and a wig.

The little boy, barely 3, appears uncomfortable amid the fanfare of the event, the unveiling of a bronze and granite marker commemorating the signing of the Point Elliott Treaty. More than 3,000 people gathered for the dedication, including three tribal members who were present the day the treaty was signed 76 years earlier.

Next to the child is his mother, Harriette Shelton Dover. Behind her is the boy’s grandfather, William Shelton. All wore the Plains attire, likely gifts worn to distinguish their status, though not reflecting their local roots.

Today that little boy in the photo is 87. His hair and beard have turned white, but his mind is sharp. Wayne Williams paid a visit to the Hibulb Cultural Center at Tulalip the other day, whistling as he reminisced about his grandfather, his mother and a lifetime of Treaty Days.

“We went every year,” Williams said. “In the early days, we slept in the longhouse during Treaty Days. The fires were warm. Early in the morning, maybe around 4 a.m. or so, someone would get things going, and they would start to sing and dance. Then part way through, speakers would talk about the day and what it meant. For our people and our way of life, it was always changing.”

Photo by J.A. Juleen, provided by Everett Public Library. The Tulalip Longhouse interior January 1914, during Treaty Day commemoration of the 59th anniversary of the Point Elliott Treaty signing. Tribal members are playing the stick game slehal, which is still played at reservation gatherings.
The longhouse that stands today is not the original that Shelton convinced federal authorities to allow the tribes to build. The new longhouse was built in the 1960s.“It is called, in our language, pigwedaltw (pay-gwud-al-twhoo). It means dancing house, or dance house,” said Ray Moses, 84, a tribal elder and story teller. “When they opened that longhouse, I went there with my brother. Big Shot (Cyrus James) was speaking. When he got done, he asked, ‘Why didn’t you Moses boys come out here?’ And we said, ‘We weren’t asked.’ You really don’t need an invitation though. We were bashful.”English and Lushootseed, a Coast Salish language, are spoken interchangeably at many gatherings today, though not as much as in those days.

Neither Moses nor Williams speak Lushootseed, one of the lingering effects of the boarding school.

“I can understand it, and I know a few words, but I can’t speak it,” Williams said.

Today, the language is being preserved, recorded and taught to younger generations.

Thursday will mark the 160th anniversary of the treaty signing. It is a fairly short document — 15 articles, in all. There are 100 signatures on the treaty. Eighty-two, those belonging to Indian leaders, are simple Xs.

The government wanted land; the tribes, to preserve their way of life.

Photo courtesy of the Everett Public Library. Tulalip Longhouse Interior January 1914, at the Treaty Days commemoration. Posts inside the longhouse were ornamented by William Shelton with clan and family symbols.
Like the U.S. Constitution, the treaty continues to evolve. People wrangle over its application to treaty Indian fishing rights and fights over property lines. These days, the debates have moved into other realms, including patent rights over the DNA of every tree, flower and shrub indigenous to this region. That could have far-reaching implications in the biotechnology industry.The power of the treaty lies in those reserved rights and the inherent sovereignty of tribes. The rights over land management on the reservation demonstrate that power. Today, the realization of land used for economic development has driven economies on and off the reservation, providing 3,500 jobs for people working for the tribes and its casinos and another 5,000 jobs at companies that hold tribal contracts.Listening to the past

Kyle Moses, who at 28 is chairman of the Longhouse Committee, oversees Treaty Days preparations. The cultural leaders keep the gathering alive, understanding that they cannot know where they are going without knowing where they have been.

“It is important to remember the history,” Moses said. “We are still here. Our culture is still here. We are reminded of our ancestors and how they had to fight for what we have today.”

Treaty Days began as a means to preserve the culture and traditions. Now the emphasis is on exercising sovereignty and treaty-protected rights, comprehending what that means and understanding the need to continue to pass those values on to future generations.

“It is important to remember what was promised,” Moses said.