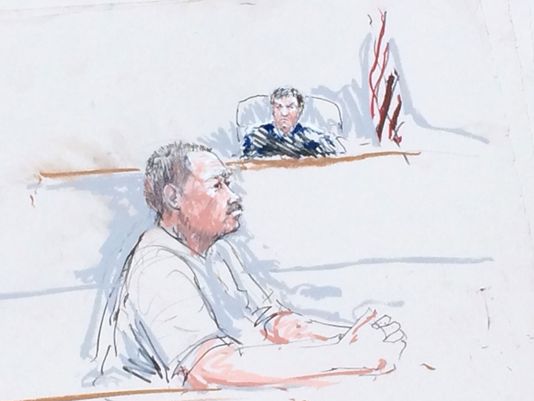 SEATTLE – The gun used by Marsyville-Pilchuck High School shooter Jaylen Fryberg to kill four classmates and himself last year was illegally purchased by his father, according to federal court documents.

Raymond Fryberg was under a permanent protection order from Tulalip Tribal Court after Raymond’s then-girlfriend claimed in 2002 that he had threatened and assaulted her.

In 2012, Raymond pleaded no contest after being charged with violating the order and was sentenced to a year of probation.

As part of the protection order, Raymond was not allowed to purchase firearms. But the court documents reveal that he purchased five firearms from a Cabela’s store in Tulalip, Wash., between January 2013 and July 2014. When he purchased the guns, he falsely indicated on the purchasing agreement that he was not under a protection order.

Investigators at the Marysville-Pilchuck shooting on October 24, 2014, later identified the gun that Jaylen Fryberg used – a Baretta PX4 Storm – as the one of the guns Raymond Fryberg purchased.

“We are saddened by this morning’s news. Our hearts go out to the victims’ families, our students, staff and community as we continue through the long process of recovery. This is part of an ongoing investigation and all questions related to this matter should be deferred to the FBI.”

“Cabela’s strictly complies with federal, state and local laws regulating the sale of firearms. Cabela’s records indicate the transaction was processed in compliance with applicable regulations, including background checks.”

“The Tulalip Police Department continues to coordinate with federal authorities. It is not our policy to comment on an active investigation and at this time we have no further information to share. Our thoughts and prayers continue to be focused on the victims, their families, and the healing of our communities impacted by the Marysville Pilchuck High School shooting.”