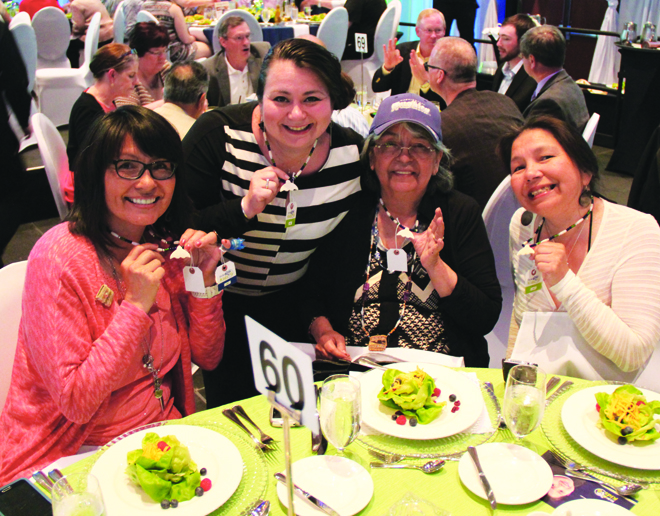 On the evening of Saturday, May 9 the Tulalip Resort Casino’s Orca ballroom was the location for the 17th Annual Tulalip Boys and Girls Club “It’s for the Kids” Auction fundraising event. The ballroom was elaborately designed like never before with a tiered seating arrangement for the record high 650 guests who attended. This year’s theme was in true 12th Man fashion as it was devoted to the Seahawks and prevalent in all visual aspects, from the vivid navy blue and action green colored table dressings and centerpieces to the accent lighting.

The Tulalip Boys & Girls Club is the first club of its kind to be built on tribal land in Washington. Established in 1995, 2015 marks twenty years of commitment to the community.

The Club serves as a model for those working to improve the lives of young people in surrounding communities.

With the success of previous auctions, the Club has not only been able to sustain services, but to likewise complete needed campus expansions that added additional learning space. This included spaces like 2014’s all new Computer Learning Center with state-of-the-art technology allowing our kids to stay on par with the area’s best schools when it comes to computer technology.

While auction attendees enjoyed the great food, great friends and the great auction items available, they were continually reminded of the hundreds of children who’ll benefit from the night’s proceeds. Video montages depicting Club members, staff, and events were played throughout the evening. A very touching video dedicated to Diane Prouty, or as the kids call her “Grandma Diane”, was shown right before she took the stage to speak on the importance of Tulalip’s Kid’s Café. Through Kids Café, the Club provides healthy, filling, hot snacks and meals to kids after school. Many of the kids who participate in Kids Café would not have an afternoon snack or dinner without the Club.

Auction participants showed their generous support by donating a record high $40,945 to Kids Café. That proved to be just the beginning. By the end of the night, the auction had also raised a new record for total proceedings, amassing over $300,000 that will benefit and support the Tulalip Boys and Girls Club.

On behalf of the Tulalip Boys & Girls Club, the Tulalip Tribes thanks everyone who contributed to the success of the 17th annual auction. The outpouring of support received each year from sponsors and volunteers is quite overwhelming. As in years past, the funds raised from the auction will ensure that our club not only continues to provide, but improves upon, quality programs in a fun, safe and positive environment for the children who attend throughout 2015 and early 2016.