After their season opening 74-6 victory over the Marysville Getchell Chargers c-team, the Tulalip Heritage Lady Hawks (1-0) traveled south to play another out of league game vs. Tacoma Baptist. The game was played on Saturday, December 3, and it did not go well for the Lady Hawks. They were outscored by 40 points, losing 23-63. Tulalip quickly shook off the loss and put their attention to their next opponent, the Bears of Chief Kitsap Academy.

On Wednesday, December 7, the Lady Hawks hosted the Bears at Francy J. Sheldon gymnasium. The Chief Kitsap team is a young squad comprised of only two upper classmen to go with three 9th graders and two 8th graders. While on the other side, senior guard Aliya Jones was making her home court debut for the Lady Hawks.

Just like their last home game, the Lady Hawks came out firing on all cylinders from the opening tip. They girls were locking up on defense, forcing turnovers, grabbing nearly every rebound, and executing their offense. Aliya wasted no time going into attack mode and scored 12 points in the opening quarter. Tulalip went up 16-0 before making a four player substitution. The Bears didn’t score a field goal, but did manage to get on the board with a pair of free-throws late in the 1st quarter.

The home team was up 20-2 going into the 2nd quarter. With the starters back in the game, the Lady Hawks again controlled every facet of the game and pushed their lead to 32-2. Sophomore Claudia Parker went on an 8-0 run of her own, including the only two 3-pointers of the game, thanks to well-timed passes from her teammates. The Bears were held scoreless in the quarter and at halftime the Lady Hawks led 44-2.

The 2nd half was more Tulalip domination. Aliya and Keryn Parks combined to quickly score 14 points to start the 3rd quarter before hitting the bench after their team took a 64-5 lead. When the game ended, the Lady Hawks had won by 59 points, 66-7, upping their record to (2-1) on the young season. Aliya led all scorers with a game high 24 points.

The Lady Hawks hit the road for one game before returning for back-to-back home games on Friday, December 16, vs. Lummi Nation and Tuesday, December 20, vs. Summit Sierra. 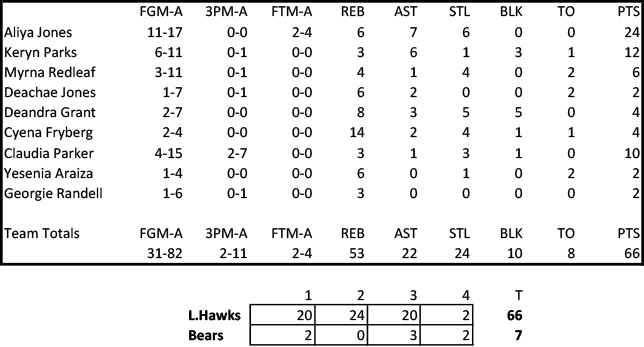