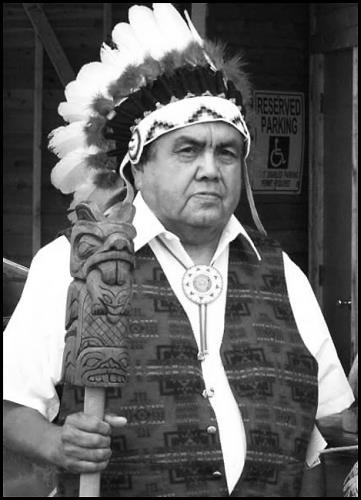 Jerry James Enick, was born April 4, 1933, in Redmond, WA, to James and Evelyn Enick. He went home to be with the Lord on January 24, 2017, in his home surrounded by family. He attended Tolt High School and graduated in 1952, soon after he enlisted into the Army on February 7, 1953, and was stationed at North Fort Induction Center, in Fort Lewis, WA. After completing his service to his country he went on to work at various trades; he was a logger; an union construction worker with the Local 292, and as a fisherman with his father, brothers and sons – fishing up and down the Skagit River. He loved being outdoors and would often get away to the mountains where he would pick berries, he was known to be the fastest berry picker. He loved his family dearly and supported his children, grandchildren, and even nieces and nephews in everything they pursued especially by sitting in the stands at every sports game possible. In the early 1990’s he began to serve his people by working for the recognition of The Snoqualmie Tribe and as well as sitting on the board for Economic Development. In 2006 he took his rightful position as the Hereditary Chief of the Snoqualmie Tribe, following his grandfather, Chief Jerry Kanim. He is survived by his three sons, Ron (Natasha) Enick, Roger Enick, Leon Enick (Annie, wife), and daughter, Lisa James (Llyod) with numerous grandkids and great grandkids all throughout Indian Country and on the Basketball Trail; onne brother and five sisters. He is preceded in death by his parents, James and The Princess Evelyn (Kanim) “Ullah” Enick, brother, Kelly Braddock Enick, sister, Betty Jean Joe, grandson, Sterling Enick and grandparents, Jenny Hern and Chief Jerry Kanim “”Tawiswick”, Visitation will be held Monday, January 30, 2017, at 1:00 p.m. at Schaefer-Shipman Funeral Home followed by an Interfaith service at the Tulalip Gym at 6:00 p.m. Funeral Services will be held Tuesday at 10:00 a.m. at the Tulalip Gym with burial to follow at Mission Beach Cemetery.