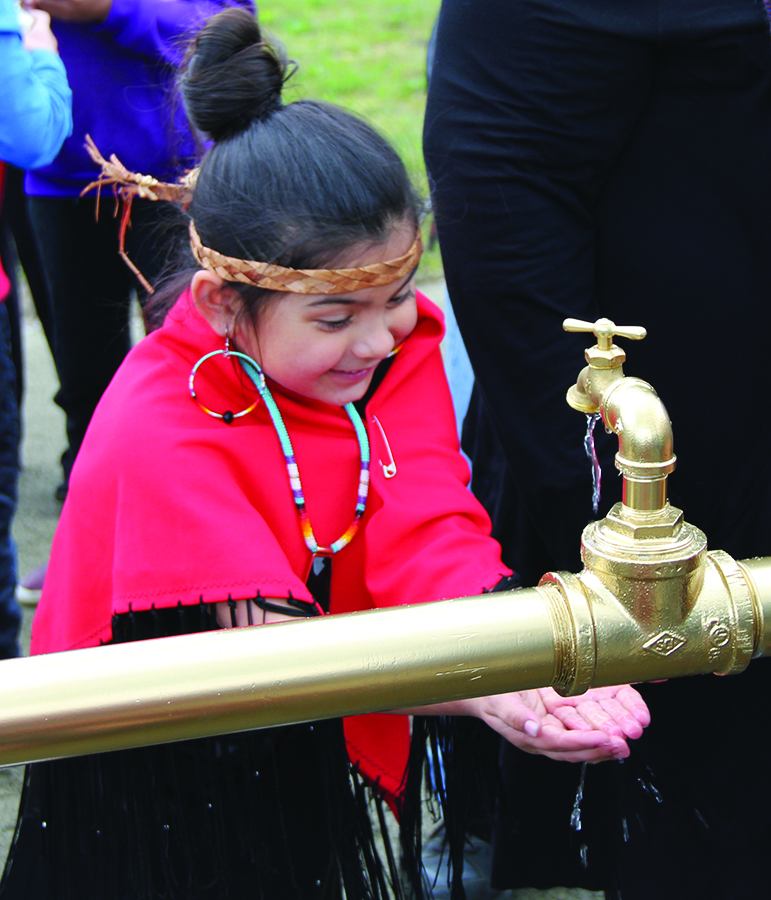 The usually vacant lot across from Boom City was anything but as hundreds of community members, tribal employees, and partners in interest gathered to celebrate the completion of the Tulalip Water Pipeline Project, affectionately called ‘Big Water’, on Friday, April 28.

The historical moment was treated as such with a traditional welcoming ceremony provided by the Tulalip Salmon Ceremony singers and drummers led by Glen Gobin. There was an open invite for all tribal members to join in with their drums and singing voices to perform a song passed down by Harriet Sheldon Dover, as well as a personal song belonging to Glen. Following the songs, Natosha Gobin gave a traditional prayer in both Lushootseed and English to bless the special occasion.

“Our ancestors knew that our survival as a people depended on the natural resources of our land and waters,” explained Tulalip Chairwoman Marie Zackuse. “In negotiating the Point Elliot Treaty, they ensured access to salmon were among the rights we reserved. We call ourselves the People of the Salmon. By preserving this precious resource we are defending our lifeways, our culture, and our identity.

“The completion of this water pipeline is an historic event. We have secured water for our people and our future generations for the next hundred years. It took years of planning and years more to build the pipeline, which now carries water from Spada Lake to Tulalip. It will enhance our salmon recovery efforts, habitat restoration, and will provide a source of fresh water for our people now and into the future.”

Big Water has been heralded as the righting of a wrong committed against the Tribes long ago by the City of Everett, specifically when Everett built a diversion dam and tunnel to move water from the Sultan River to Lake Chaplain in 1916. The way the diversion was managed, there were times of the year that the Upper Sultan River was completely dry. Although the Lower Sultan River received enough water from other tributaries to allow salmon to spawn, miles of Upper Sultan River were no longer accessible to spawning fish resulting in massive population losses.

After years of court battles and lawsuits regarding the diversion dam and loss of waterways and salmon spawning habitat, the Tulalip Tribes and City of Everett began mending the long history of opposition and obstruction in 2003. The two governments have since moved towards a new era of consultation and compromise. 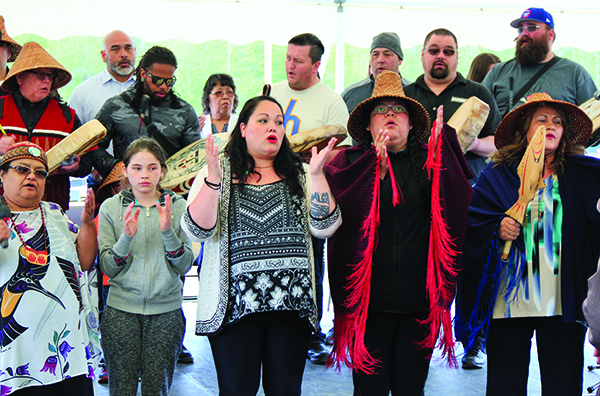 “What this was about more than anything was trust [between the City of Everett and Tulalip Tribes],” said Everett Mayor Ray Stephanson while recalling his father teaching him about the many injustices that happened to Native American people. “I never thought in my lifetime that I would have the opportunity to right a wrong, and this agreement really helped right a wrong.”

In 2016, the Snohomish County PUD created a fish passage around the old City of Everett diversion dam that made possible for 5-miles of spawning habitat to once again be available to salmon. Already fisheries staff have seen Coho and Steelhead in the area and are anticipating Chinook will return in the upcoming season. On Reservation, the Tulalip pipeline will supply approximately thirty-million gallons of water per day for the next one-hundred years. 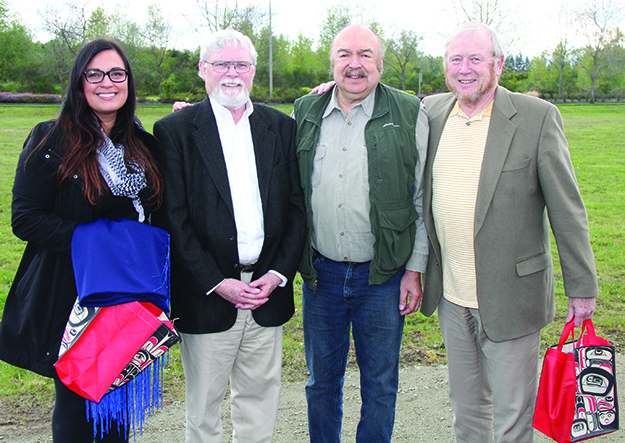 “Today’s celebration meant a completion of an agreement between the City of Everett and the Tulalip Tribes. It means potable water will be flowing to our homes to serve the needs of our families for the next 100 years and our streams will be augmented for our salmon and natural habitat,” stated Deborah Parker, Tulalip Tribal member and former Joint Water Pipeline Lead. “Our partnership reflects when two governments come together to work towards a solution. Many hours were spent meeting, negotiating, lobbying, and formalizing plans until final construction. The Joint Water Pipeline staff and leadership deserve a great deal of appreciation. It was truly an honor to be a part of this process and to witness the flow of water through the water line. Water is indeed an important part of our everyday life.” 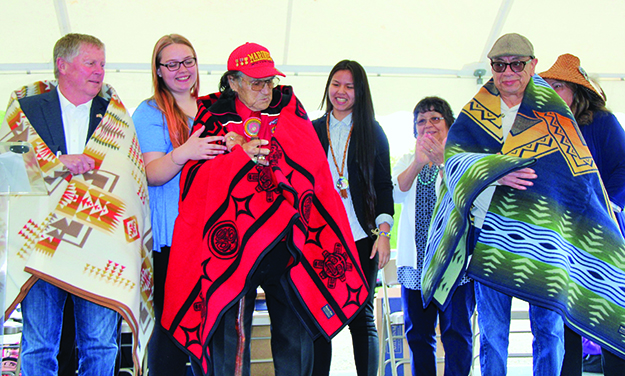 Highlighting the Big Water celebration was the ceremonial opening of the taps. The Board of Directors were joined by former Chairmen Stan Jones and Herman Williams, Jr. and Everett Mayor Ray Stephanson as they each turned a golden spigot to free a new source of life-giving water. Tribal Design provided hand carved ladles in the shape of a canoe for leadership to drink out of.

Concluding the celebration was a salmon bake feast cooked by Cy Fryberg and his family. Many attendees could be seen filling their gifted water bottles with water from the honorary golden pipes. 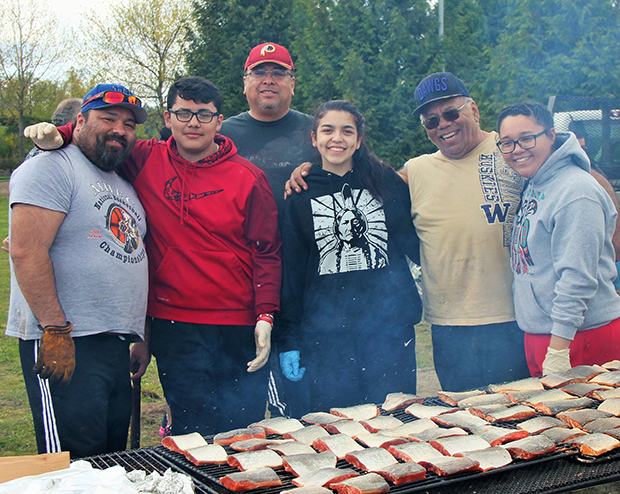 While Big Water is the culmination of many mission statements and priorities of the Tulalip Tribes, there are also plenty of ties to the ‘water is life’ slogan that has become omnipresent in Native communities across the country. Those sentiments were not lost on the diverse group of attendees, and in fact, it was a member of Tulalip’s younger generation who really summed it up best.

“Water is humanity’s basic need. Water affects everything from education to health to our future generations. They are the ones who will continue our legacy and our culture. The installment of the water pipeline will be innovating in our future by taking pressure off the water table. This will assist in the care of our ever-growing tribal community,” proclaimed Keely Gobin, vice-chairwoman of Tulalip’s Youth Council. “Prior to European settlers in the 1800s, the salmon returned to our area annually in huge numbers. Salmon and green life were the number one food source for our community. Settlement and the increasing population in the United States led to the development of dams and factories, which destroyed our local ecosystems, including our natural salmon runs and habitat. As sovereign people we must stand strong in the preservation of our Mother Earth, for she along with my great-great-grandchildren our counting on us to keep our waters pure. t’igwicid.”