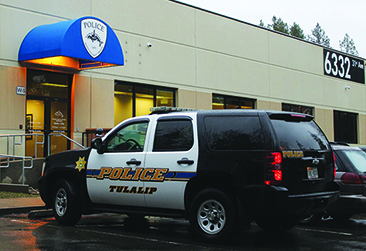 The Tulalip Justice Department is getting settled in and acquainted to their new home at the 31st Ave campus, located almost directly across the street from their previous location. Back in November, the Justice crew got a head start to the holiday craziness by doing what many people often dread, moving. And although many Justice employees were exhausted from having to go from packing, moving and unpacking to shopping, wrapping and unwrapping, the team is now refreshed in a new building at the start of the new year and excited to utilize all of the space the 31st Ave building has to offer.

“The impetus for the move was that the old courthouse had been at its prior location for over fifteen years and had a lot of wear and tear,” explains Tulalip Tribal Court Director, Wendy Church. “The other reason is that the Tribes will be building the new [Quil Ceda Creek Casino Hotel] at the previous courthouse site.” 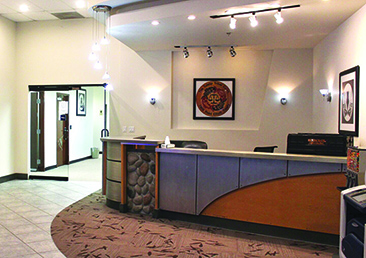 Located at the south end of the 31st Ave building, the Justice Department consists of many divisions including Tribal Court, Prosecutor’s Office, Probation Office, Public Defender’s Office, Tulalip Office of Civil Legal Aid, Wellness Court and the Tulalip Police Department. The building features two courtrooms and individual offices, which allow more privacy for the tribal justice clients. The recently re-located Police Department is in a separate corridor of the building.

“The space is a lot more than we previously had, which provides us room for additional growth,” states Tulalip Police Commander, Kenn Johnson. “We’ve received a lot of compliments from visitors about how much nicer it is, but we’re still adjusting to the space. Having a conference room and training room in our own facility is really nice because we didn’t have that in our old building. Overall the staff likes it. The patrol officers like the new patrol room, which has four separate workspaces, where they can take care of their stuff instead of fighting over the one space that we had before. And they’re really happy about the kitchenette, as long as they make sure to keep it cleaned up.”

As many divisions that create the Justice team, the department still isn’t large enough to fill the 70,602 square foot building. The Justice Department, in fact, shares the spacious campus with the Tulalip Gaming Organization (TGO) Hiring and Training Resource Center, which is located at the north end of the building. The Resource Center moved to the campus in August of 2017 and is furnished with furniture and carpeting previously featured at the Tulalip Resort Casino and Quil Ceda Creek Casino, giving the Center a luxurious vibe. The Resource Center hosts trainings for the entire TGO team and, as of recently, for Quil Ceda Village as well. The TGO hiring team is located at the Center to conduct interviews and tests for positions at the Tulalip Resort Casino, Tulalip Bingo and Quil Ceda Creek Casino. 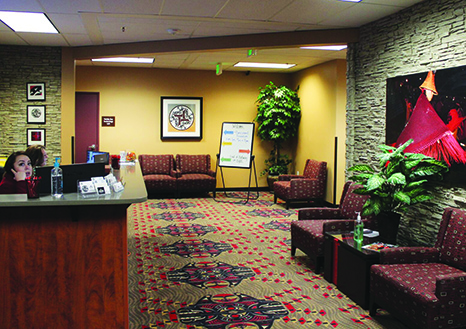 “This location benefits both the community and employees,” states Lisa Olver, Training Manager for the Tulalip Resort Casino. “It created a one-stop shop for the employees and new hires, so when they come in they have the ability to get hired, trained and licensed through [the Tribal Gaming Agency].”

Non-gaming Tulalip employees and Tulalip tribal members should note that both the Central Drug and Alcohol Compliance Department as well as Central Benefits are now located at the TGO Hiring and Training Resource Center. The Resource Center also hosts a week-long training, on a monthly basis, for tribal members called the Job Ready Program. The training teaches guest service and cash handling skills that, upon successful completion, would count as experience for tribal members trying to obtain a TGO position with those minimum requirements.

As the Tulalip Tribes continues to expand, the Justice Department and TGO Hiring and Training departments find themselves in a new location with a fresh perspective and a readiness to continue offering their services to the Tulalip community.

“Our new building is much more dignified and has much more space,” says Wendy. “We appreciate the Tribes relocating us to the new courthouse. The move itself was not without some hiccups, but we transitioned nicely into the new building with little interruption to the community. Overall we are pleased to be at the new building. Quil Ceda Village, the Tribes, the Tulalip Resort Casino and TDS were all instrumental in assisting us with the many details of such a large relocation.”

For additional information about the Justice Department please contact (360) 716-4773. And to find out more about the TGO Hiring and Training Resource Center please call (360) 716-1562.