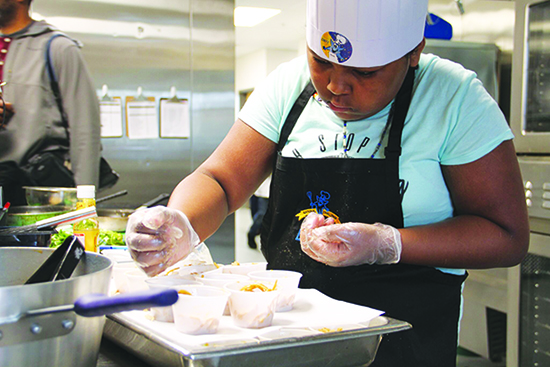 Ten elementary students from the Marysville School District were selected to compete in a culinary competition on Thursday March 22, at the Marysville Pilchuck High School food commons. The young chefs, wearing aprons and tall chef hats, prepared Asian-inspired fusion dishes for a panel of guest judges. The future chef competition is held in school districts across the nation by Sodexo, a company that focuses on providing quality of life services to local communities, which include nutrition and health care. Among the ten students competing in the contest was Quil Ceda Tulalip Elementary student and Tulalip tribal member Mone’t Clemens, who just turned ten years old a day prior to the competition.

“So I’m not just watching TV, I always ask my mom if I can help cook,” says Mone’t. “When I saw the flyer for the contest, I really wanted to sign up. I think the competition is wonderful, everybody is really nice and helpful. All the kids’ dishes are pretty and look delicious.” 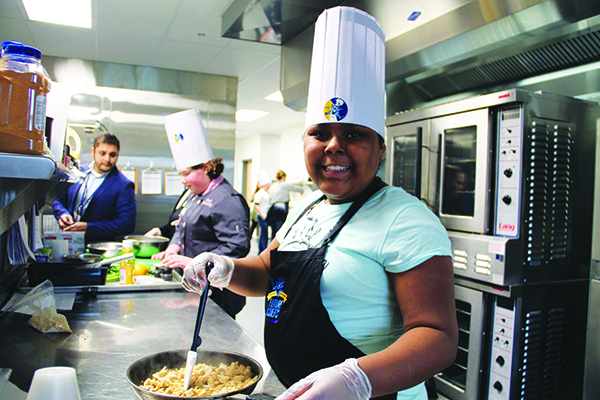 The kitchen of MPHS was busy as the young chefs hustled about, cooking and plating their meals in sample cups for the judges. Outside, in the food commons, parents and family members were getting hungry as the smell of delicious food slowly seeped from the kitchen to the cafeteria.

“This is very exciting,” expressed Mone’t’s father, David Charley. “She always helps cook our dinners. About a year ago, she started asking her mom and was always told, ‘no, you’re too young’ but she kept pressing for her interest and here we are.”

“Today I prepared an Asian Peanut Noodle dish with chicken,” stated Mone’t as she happily described her recipe. “I chose this dish because I like peanut butter. My family and I are big peanut butter fans, so me and my mom thought it was the perfect dish to make.”

Once all the sample cups were prepared, the student chefs took their stations in the commons and anxiously waited for the judges to come by and try their recipes. Mone’t received many compliments such as ‘this has the perfect amount of spice’ and ‘very tasty’. One judge even opted to indulge in a second helping of the Asian Peanut Noodles. Once all meals were thoroughly taste-tested, the judges announced the winner of the 2018 Marysville School District-Sodexo Future Chef Competition, Joshua Earnheart of Grove Elementary. 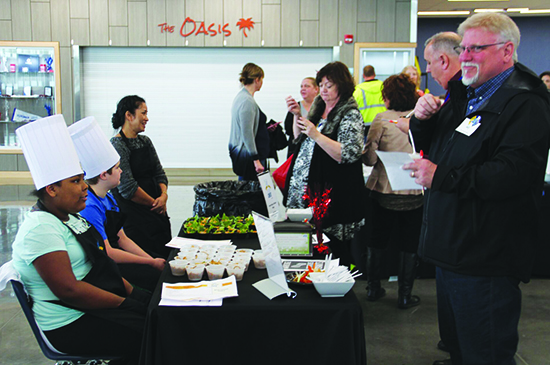 Although Mone’t didn’t take first place, she isn’t letting that discourage her from her passion for cooking. After all, she was one of the only Future Chef’s in the competition with zero sample cups left after the judging was complete, which is saying a lot when in a room full of scrumptious food created by a group of young talented cooks.

“In the future, I see myself cooking for my family and preparing delicious dishes for my future kids and my mom when they come over for Thanksgiving. I think that if somebody really wants to learn how to cook, they should ask their parents, grandmas or guardians to help in the kitchen, because with your family is the best way to cook.”