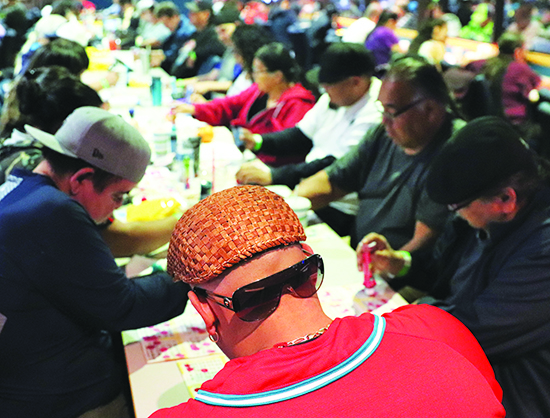 Local Tulalip citizens were joined by their fellow tribal members that journeyed from as far north as Vancouver, B.C. and as far south as Olympia to fill the seats of Tulalip Bingo on Monday, April 29. The occasion? The highly anticipated 18th annual Tribal Bingo Celebration. 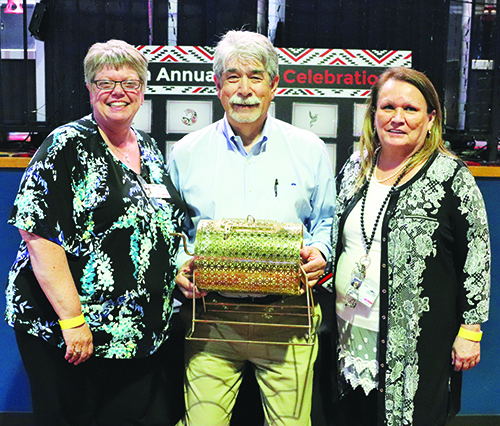 Bingo Director Tammy Taylor (left) and Board of Director Mel Sheldon (center) were all smiles during the day-long bingo celebration.

“Who is ready to win some money?!” resounded Board of Director Mel Sheldon. Like he has done in years past, Mel reigned supreme on the mic as M.C. for the specialty 10:00a.m., 2:00p.m. and 6:00p.m. sessions. He kept the atmosphere lively and upbeat with plenty of jokes and his witty banter.

Nearly one-thousand tribal members turned into dauber enthusiasts while enjoying the festivities and trying their luck to win high-end prizes or line their pockets with cold, hard cash.

“We are honored to host our tribal bingo while bringing fun and excitement to the membership for 18 wonderful years now,” said Tammy Taylor, Tulalip Bingo Director. “The beautiful part of our celebration is bringing the membership together for a fun time, free of politics and drama. Today really is all about our people enjoying each other’s company, sharing stories, and catching up with friends and family you don’t see often enough.”

Bingo staff did their best to make the 18th annual celebration move along as smoothly as possible. Like the last couple years, the event was split into three separate sessions instead of only two. Keeping the extra third session makes seating more comfortable and gives a slight bump to everyone’s chance of winning cash and door prizes, such as a 75” TV, matching recliner set, and vacation voucher. 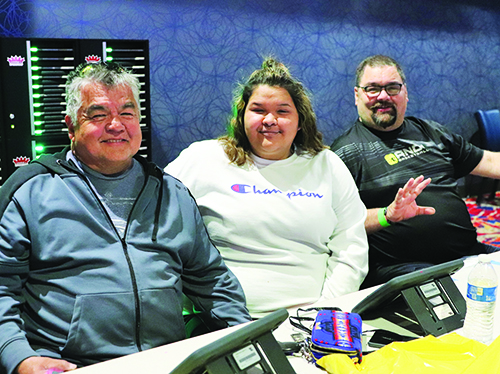 The day was especially exciting for Toneena Gobin who kicked-off her 20th birthday by attending the morning bingo session. Fortune favored the birthday girl as she won a whopping $1,199 cash prize.

“I almost fainted from being so excited,” beemed Toneena after collecting her winnings.

Spanning each session were 15 separate games of bingo, including hit favorites like Large Crazy Kite, Indian Star, and Blackout. During each session an estimated $33,000 in total prizes were awarded to bingo and door-prize raffle winners.

“It’s a time we all come together to celebrate,” reflected Mel following the afternoon session. “Bingo has been a pastime for generations now. Seeing all the first time 18-year-olds who participated today, adding to our tribal family, really makes it worthwhile.” 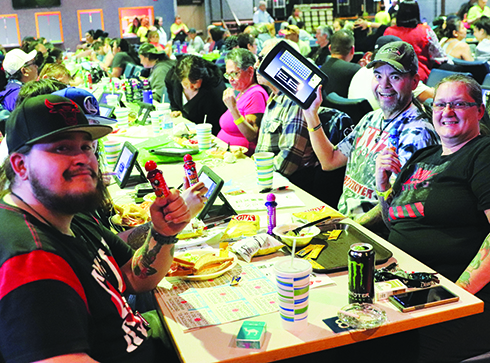 “Bingo started us [in the gaming industry] back in 1983,” added Tammy. “It’s been an amazing journey to where we are now. You could see so many big smiles, hugs being given, and loud laughs shared throughout today. From our Bingo team members to the Enrollment team members, everyone did a fantastic job start to finish.”

Smiles and laughs were had by many of the 970 tribal members who eagerly daubed away at their bingo cards during the two-hour sessions. Some even made the most of a fifteen-minute break to try their luck at the newly installed slot machines. The games of chance paid off big time for a lucky few, especially those who had the golden opportunity to yell out an ecstatic, “BINGO!”