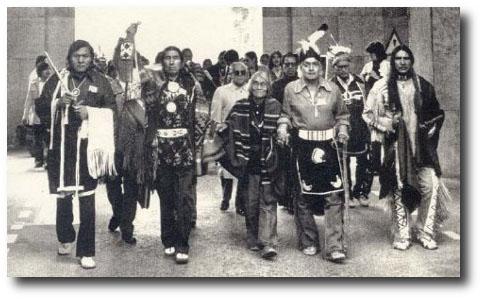 The first indigenous delegation to go to the UN in Geneva demanding their treaty rights.

The International Indian Treaty Council turned 40 this year and its annual conference will celebrate the past, share experiences and cultures of the present, and develop plans and strategies to meet the ongoing struggles of Indigenous Peoples worldwide.

When the First International Treaty Council of the Western Hemisphere held its first conference on the land of the Standing Rock Sioux Tribe on June 8-16, 1974, around 5,000 representatives from 97 indigenous nations from across North and South America attended. The conference established the International Indian Treaty Council (IITC), a non-profit organization that works for Indigenous Peoples’ human rights, sovereignty, self-determination, and the recognition and protection of treaties, traditional cultures and sacred lands. The organization 40th Annual International Indian Treaty Council Conference (IITC) – a huge and historic event – will take place on the family land of Phillip Deere, a Muscogee (Creek) Nation citizen and one of IITC’s original co-founders, in Okmulgee, Oklahoma, September 10-12. The theme of the conference is “Commemorating 40 years Defending the Rights and Recognition of Indigenous Peoples.”

The 1974 conference also adopted the IITC’s founding document – the Declaration of Continuing Independence. The groundbreaking document was the precursor to the United Nations Declaration on the Rights of Indigenous Peoples (UNDRIP) that followed more than 30 years later – minus the compromising language of Article 46 in the U.N. document.

The first words of the Declaration of Continuing Independence set its tone. “The United States of America has continually violated the independent Native Peoples of this continent by Executive action, Legislative fiat and Judicial decision. By its actions, the U.S. has denied all Native people their International treaty rights, treaty lands and basic human rights of freedom and sovereignty. This same U.S. Government, which fought to throw off the yoke of oppression and gain its own independence, has now reversed its role and become the oppressor of sovereign Native people.”

Bill Means, Oglala Lakota, and an IITC board member, will be one of the many notable speakers at the conference. “It’s a milestone in the history not only of treaty rights in this country but also of the coming together and advocating for Indigenous Peoples’ human rights throughout the world,” Means told ICTMN. “This is a very important conference to mark and record some of that history since 1974.”

Means, along with his brother the late Russell Means, was a leader and participant in the 1973 occupation and resistance action at Wounded Knee on the Pine Ridge Reservation – events that led directly to the first Treaty Council conference. He will talk about the early days of the American Indian Movement (AIM), but, he said, “We didn’t do this by ourselves. We [AIM] did the organizing, but we had the wisdom and the support of the chiefs and headmen as well as the strong women of the Lakota people at the [first] treaty conference. It was a culmination of many different forces coming together at Wounded Knee in 1973.”

RELATED: A Tour of Wounded Knee: Why It Matters, Why It Hurts

The inspiring message from the chiefs and headmen continues to this day, Means said. “They talked about treaty rights as the foundation of our people as a nation – not necessarily as a tribe. Long before reservation days we were a nation of the Lakota People and that’s how we signed the treaties so it’s important for the recognition of our people as nations in the international community,” Means said. “I think that with the advent of reservations in the United States people forget that we come from very powerful Indian nations and under international law we meet all the criteria for nationhood. So part of our work has always been nation-building and the unity of our peoples throughout the world.”

Chief Wilton Littlechild, a citizen of Ermineskin Cree Nation, an attorney and former Member of Parliament in Canada, agreed that treaties are unparalleled in importance. “It was treaties that first gave Indigenous Peoples their voice at the U.N. and in the international arena,” he told ICTMN. “The 1974 Declaration of Continuing Independence from IITC’s first conference laid the groundwork for what would become the U.N. Declaration on the Rights of Indigenous Peoples and its international recognition of treaties.”

Littlechild is International Chief for Treaties 6, 7 and 8 in Canada – three of a series of 11 treaties signed between the aboriginal peoples in Canada and the reigning British monarchs from 1871 to 1921. He is currently a member of the United Nations Expert Mechanism on the Rights of Indigenous Peoples and also served for six years as the Indigenous expert from North America on the U.N. Permanent Forum on Indigenous Issues. Littlechild will speak at the conference about the 40 years of work for the international recognition of treaty rights on a panel with Means, IITC Board President Francisco Cali, Maya Kaqchikel, and IITC Executive Director Andrea Carmen, Yaqui.

Carmen became involved in the IITC in the mid 1970s. She became a full time IITC staff member in 1983 and has been its executive director since 1992. She reflected on IITC’s work over the past four decades and her involvement with the organization in anticipation of the upcoming conference.

“Working for the IITC for most of my adult life, I have been able to be part of many historic changes for the recognition of Indigenous Peoples’ rights internationally, with real impacts ‘on the ground’ – where it counts,” Carmen told ICTMN.

“The world community had to realize that we still exist, we have inherent and treaty rights that can’t be ignored and that we also have essential contributions to make in global dialogues on human rights, racial justice, bio-diversity, sustainable development, climate change, food sovereignty and many other issues,” she said. “Many challenges still remain, and our work is far from over. But if we stand together, the international Indigenous movement will continue to prevail in defending Indigenous Peoples’ rights and ways of life. IITC will continue to be an active part of that movement.”

The conference will be held at the Phillip Deere Roundhouse on Muscogee (Creek) Nation land. Deere was a traditional healer, spiritual leader, civil and human rights activist, oral historian and storyteller. He served as a spiritual guide for the American Indian Movement (AIM), spokesman for IITC and participated in the United Nations International Human Rights Commission in Geneva. Deere passed into the spirit world in 1985. The re-building of the Roundhouse has been a dream of Deere’s family. The Muscogee Nation provided financial support for the project and the 40th Annual International Treaty Council Conference will be the first event to be held in the new space.

The two-and-a-half day conference is packed full of presentations, discussions and cultural events beginning with a sacred fire lighting ceremony at 6 a.m. on September 10. An agenda and more information are available on IITC’s website.