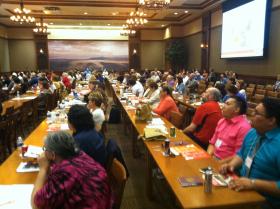 Partners in three states are working with Native American communities to focus on health in Indian country. A federal grant worth more than $13 million establishes a collaboration to research American Indian health in South Dakota, North Dakota, and Minnesota.

Researchers from one dozen health and education organizations meet with members and advocates of America Indian communities. It’s a break on day two of a major health summit in Sioux Falls, and a young woman chats with fellow college students at the conference.

The University of North Dakota junior wants to be an oncologist. She’s particularly interested in cancers found in women.

Rocke says her culture ties her to the reservation, which is why she plans on amassing knowledge and skills in higher education to establish her practice on reservations. The future M.D. says discussions surrounding collaborative research for American Indian health inspire her, and one particular speaker unexpectedly piqued her interest.

“I never really thought about public health, but how he spoke and was like ‘We have to change public health now and IHS, and if we’re not going to change it, it’s going to stay forever and people are going to keep getting sicker. Nobody’s going to do anything about it.’ That really touched me, so now I’m looking into public health after my undergrad,” Rocke says.

The breadth of possibilities collaboration offers tribes and non-Native people is unimaginable. That’s according to educator Gene Thin Elk. He’s a Lakota man from Rosebud Sioux Tribe who says all cultures are returning to “indigeniety.” He says that may not be a real word to most people, but it is to Thin Elk.

“I think this is the time. It should have been the time a long time ago, when our first surgeons and our first MDs from Indian Country came out.” -Courtney Rocke

He says people recognize that embracing the lessons of the past is the way forward. Thin Elk presents at the conference, and his speech examines how tribal nations can be legitimate partners in research to identify health challenges and develop real solutions.

“Research is not new. They used to be able to look out and watch and observe and learn, and as the people observed and learned, to look at it and push in that direction so we can find the things that we need to find out. good, bad or indifferent, and we learn from those,” Thin Elk says.

Thin Elk says he’s been to 454 indigenous nations in the last three decades. His view is that teachings of American Indian culture can benefit people around the globe, but non-Native practices also prove helpful for Native communities. Thin Elk says that symbiosis is desirable – but not at the expense of sovereignty. He notes that protecting intellectual and physical property used in research, elements like genetic codes, blood and tissue samples, is a paramount value.

Russ Zephier from Pine Ridge is a committee member on the Oglala Sioux Tribe Research and Review Board.

“If there’s any individual, group, whatever wants to come onto the Pine Ridge reservation to do research in the health field or whatever it might be in diabetes or heart disease, whatever, they have to come through our board first to get our approval before they can do this,” Zephier says.

That means the Sioux people have standing to allow or disband research, that the committee has a right to know what studies researchers conduct, how they perform those trials, and what the experts find. Zephier says the tribes are open to more collaboration, but money is a significant hurdle in Native health care.

“They have something that they call contract health. If an individual is injured, if they can’t provide that service in Pine Ridge or any of the hospitals on the reservations, then they can send them out to Rapid City or Sioux Falls or wherever, but those funds are limited, so they go on priority stuff,” Zephier says. “If someone has real major issues, then they do it.”

Zephier says he hopes funding issues don’t stand in the way of research and discoveries in mental and physical Native health, particularly incidence of obesity and diabetes.

Native American educator Gene Thin Elk says that’s where the latest generation asserts itself. He says this segment of young people who’ve become educated in health practices possesses the resources for change which spreads up the societal hierarchy.

“We have this generation of elders and traditional healers who are saying, ‘Okay, we’re open to collaboration now and we’re more willing to do that,’ because we have those younger people who can articulate for us and watch out for those things, because they’ve been educated in the process,” Thin Elk says.

“I think this is the time. It should have been the time a long time ago, when our first surgeons and our first MDs from Indian Country came out,” Rocke says. “There’s more now, and it’s growing as time goes on. And we’re learning that everything we were told through assimilation and genocide isn’t true, that we can accomplish whatever we want.”

Pre-med student and Native American woman Courtney Rocke says the new research initiatives offer her cultures a chance at improving health community-wide. She says that’s because people are now actively working to change the situation instead of musing that somebody should.

Health systems, universities, and tribes from three states are part of the Collaborative Research Center for American Indian Health. Specific projects for research in Native American health are currently working through federal approval.