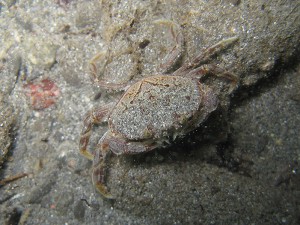 A juvenile dungeness crab found within the newly formed beaches near the mouth of the Elwha River. Steve Rubin/USGS

With thousands of cubic yards of sediment forming new beaches at the mouth of the Elwha River, marine life that’s been missing for decades is showing up again.

Before the recent deconstruction of the Elwha and Glines Canyon dams, the beaches at the mouth of the river were mostly cobblestone, which is suitable for a limited type of shellfish, including red rock crab, horse clams and urchins.

After the dams started to come down in 2011, sediment started flowing heavily downriver, and the cobblestones have been covered up with soft gray sand. As a result, scientists started seeing more marine life, such as Dungeness crab, make use of the new beach.

“We have always looked forward to a more sand-dominated substrate adjacent to the river mouth, once the dams were removed and trapped sediments were washed downstream,” said Doug Morrill, the Lower Elwha Klallam Tribe’s shellfish biologist and natural resources manager.

The sand habitat attracts hardshell clams such as butter clams and littlenecks, plus Dungeness crab.

“A whole new habitat has formed,” said Mike McHenry, the tribe’s habitat program manager. “Since dam removal, we have witnessed the transformation of rocky inter- and sub-tidal habitats to those dominated by sand. During last summer’s dive surveys, we observed many juvenile crabs on the floor off the river mouth.”

Fishermen have noticed changes too.