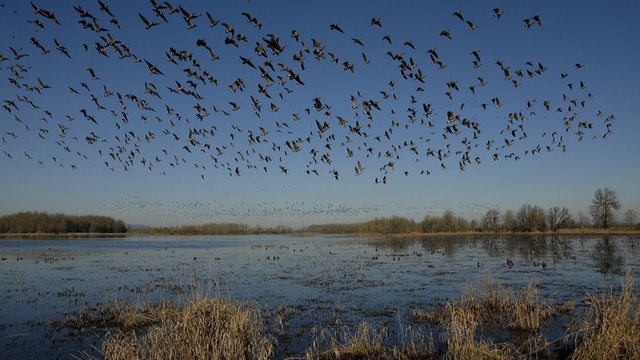 The U.S. Fish and Wildlife Service plans to eliminate the use of bee-harming pesticides on wildlife refuges in the Pacific region by 2016.

A new rule phases our the use of neonicotinoid pesticides – a class of chemical that has been linked to several bee die-offs in Oregon in the past two years, including one that killed 50,000 bumblebees in a Wilsonville parking lot.

Studies show neonicotiniods can be absorbed into plant tissue and harm bees and other pollinating insects. The European Union has banned the use of the chemicals to protect pollinators until further studies can be completed. New findings published in the journal Nature suggests a link between neonicotinoid pesticide use and a decline in bird numbers.

The pesticides are used on some wildlife refuges in sprays that control invasive insect species, and they also coat some of the seeds farmers use to grow food for wildlife on refuges in the region, according to Kim Trust, deputy chief of refuges for the U.S. Fish and Wildlife Service in the Pacific Region. The agency and its cooperating farmers will have until January 2016 to look for alternatives to neonicotinoids.

“We want to make sure in our refuges we’re using the best available tools to protect all wildlife on our refuge lands,” said Trust. “So we will will be phasing out coated seeds. We’ll be phasing out sprays except in some rare circumstances where they need to be used.”

A memo to refuge project leaders asks managers “to exhaust all alternatives before allowing the use of neonicotinoids on National Wildlife Refuge System Lands in 2015.”

The rule only applies in the Pacific region, which includes Oregon, Washington, Idaho, Hawaii and other Pacific islands. Officials say it was made in response to scientific studies that indicate neonicotinoid pesticides may harm pollinating insects.

The Center for Food Safety has sued the U.S. Fish and Wildlife Service to force a nationwide ban on the use of neonicotinoids on refuges. The group has also sued the Environmental Protection Agency to get the agency to take two neonicotinoid chemicals off the market.

Paige Tomaselli, senior attorney for the Center, said the new U.S. Fish and Wildlife rule for the Pacific region is “a responsible and necessary first step.”

“But the agency must permanently institute this policy on all refuge lands across the country,” she said in a news release. “As our legal challenges have repeatedly stated, the costs of these chemicals severely outweigh the benefits; we must eliminate their use immediately.”