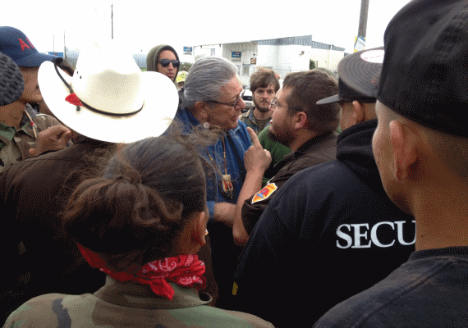 It was not immediately known what he is charged with at press time. He was reportedly taken to Rushville, Nebraska for booking, according to Toni Red Cloud, public relations director of the Oglala Sioux Tribe, who talked to the Native News Network just after the arrest.

Several dozen Oglala Sioux tribal members were in the border town of White Clay to protest the sale of alcohol. The protest began as a walk into White Clay. A sheriff deputy asked the crowd to allow a beer truck through the road.

When the protesters did not move fast enough, security and police officers moved. One deputy began shouting at President Brewer and pointing his finger in the president’s face prior to President Brewer being arrested.

White Clay, Nebraska, is just over border from the Pine Ridge Indian Reservation. It is a small town of 14 people, but sells almost five million cans of 12 oz. beer annually.

Last week, the Oglala Sioux Tribal Council on Tuesday, June 11, passed a resolution that allows for a referendum to have tribal citizens living on the Pine Ridge Indian Reservation to decide if sales of alcohol should be legal.

President Brewer was threatened with arrest when he led some 100 tribal members in a protest at White Clay in March, 2013.

[Of all the protesters, ] only President Brewer was arrested.