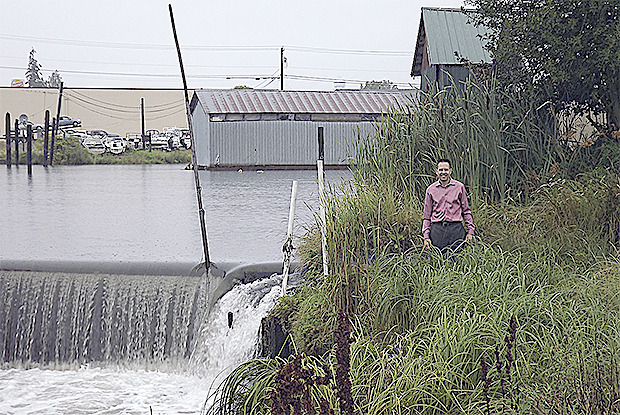 Marysville Mayor Jon Nehring hopes someday this waterfront area will be something special for the city.
— image credit: Steve Powell

MARYSVILLE – Imagine the city’s waterfront filled with classy restaurants, a boardwalk and boutiques. Or how about condominiums and a casino? Wouldn’t a park with a stage for concerts and plays be nice?

What, you didn’t even know Marysville has a waterfront? It doesn’t look like much now, but city officials hope it will be something special in the future.

“We want a vibrant downtown that’s generating income and where everybody has jobs,” Nehring said, adding the goal is to have private enterprise build up the waterfront.

The downtown master plan calls for a waterfront trail and mixed use of business and living space on the property south of Penny’s.

Four years ago the city bought the former Ed and Susan Geddes five-acre marina at 1326 1st St. for $1.9 million. It took four years to decide on a price, as the Geddeses filed suit against the city due to surface water flowing into the marina. Bill Geddes had owned the property in the 1930s as   a retention pond for a lumber mill.

The city has been applying for grants to clean up the site for years.

The city was awarded a $200,000 hazardous substances cleanup Brownsfield grant from the Environmental Protection Agency Oct. 1 of last year. A month later it received an Integrated Planning Grant from the state Department of Ecology for a similar amount. It has hired Maul Foster Alongi Consultants for $304,000 for a contract that runs from July 15, 2014 to Dec. 31, 2017.

Past activities at the location, including painting, boat sanding and fuel and oil storage and handling, likely contaminated the site with arsenic, cadmium and polycyclic aromatic hydrocarbons. In addition, stormwater discharge from the adjacent mill site has likely caused some of the contamination.

The property was historically used as a marina, but the city has stopped renewing leases and has removed several boat houses, the grant says.

Nehring said the city knew the site was contaminated when it bought it, and it also knew grants would be needed to move on. The state money will determine chemicals in the soils and the method of cleanup. The money from the feds will help pay for the actual cleanup.

“We need more money. This will just get us started,” Nehring said.

He said how much the cleanup will cost will be determined by what goes there. Some development needs would have to have more cleanup than others.

Nehring said the city spent about $200,000 in federal money to clean up the area just to the East a couple years ago, but that was “minor” compared with Geddes Marina, said Gloria Hirashima, Community Development director.

Hirashima said no matter what goes there drinking water will be pumped in and people will not want to be exposed to the contaminated soil. Across the street at the boat launch soil was cleaned to a point but then the site was capped and clean dirt put over it, similar to what is done to build over landfills.

A key to the success of the area will be finding a use that provides “constant activity.” Hirashima said that is lacking at the boat launch, and that is why homeless have inhabited that area. She said if Geddes Marina becomes more like the skate park it will be successful.

“There used to be a bad crowd there, but the families reclaimed that park,” she said. “We need active usage at a daily rate.”

The consultant will work in two phases. The first to analyze the site, the second to design remedial action and oversight.

The first phase includes cleanup options, community involvement, developer options and market analysis. Cost is $220,000. The second phase includes permitting and working with agencies, the cleanup, oversight and the final report. Cost is $84,000.

Final approval would come from the Department of Ecology.

• Presentation to the City Council and Open House for residents.

• Analyze cleanup costs to evaluate potential developer interest and flag areas of risk for the city.

• Analyze physical condition of land, including stormwater, hydrogeological and geotechnical.

• Study local and regional real estate market to look at potential marketing opportunities. That will include cost estimates, achievable rents as well as vacancy rates for competing development sites. The market analysis will ensure that the development vision has a realistic opportunity for implementation.

• Will develop construction bid package that will allow the city to procure a contractor to complete the remedial action.

• Will provide field oversight associated with implementation of the remedial action.

What do you think should be done on the waterfront?