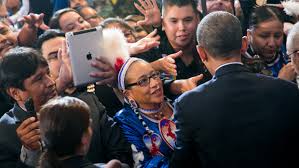 WASHINGTON, DC – The National Congress of American Indians (NCAI) appreciates the efforts of the Department of the Interior in issuing a new legal opinion and working to provide further guidance in defining the tribes “under federal jurisdiction” as of 1934 in the wake of the Supreme Court’s 2009 Carcieri v. Salazar decision regarding the Indian Reorganization Act. The opinion, however, highlights the need for Congress to make clear that all Indian tribes are under federal constitutional authority to regulate.

The Indian Reorganization Act was enacted in 1934 to restore Indian tribal governments and tribal lands after the failed federal policies of termination and assimilation. The Act ensured that the tribal way of life would continue and thrive. In its Carcieri decision, the Supreme Court determined that the Secretary of the Interior does not have authority to take land into trust for tribes that were not “under federal jurisdiction” prior to 1934. However, the Court did not define what it means for a tribe to have been “under federal jurisdiction” as of the enactment of the IRA.

According to the DOI opinion, M-37029, the term “under federal jurisdiction” is ambiguous and undefined, therefore the DOI has the authority to determine which tribes do and do not fall under the statute and will proceed to make decisions about trust agreements accordingly. In previous legal work, NCAI has taken the view that the Constitution devotes authority in Indian affairs to the federal government and that the only question is whether an Indian tribe exists, as in the Supreme Court’s decision in U.S. v. Sandoval in 1913.

Of the opinion, NCAI President Brian Cladoosby stated:
“NCAI is pleased the Department of the Interior has addressed one of the many problems created by the unclear and damaging language in the Carcieri decision. It is encouraging to see a federal agency work to strengthen the trust relationship – particularly the DOI, as one of their fundamental tasks is fulfilling the United States’ trust responsibility to tribal nations.
The opinion is encouraging, but Carcieri still stands. Tribes need a permanent, legislative solution and NCAI will continue to work towards a clean Carcieri fix. All tribes must be treated equally but as long as Carcieri is upheld, that is not possible and that is unacceptable.”
The Carcieri decision has affected all tribes – even those “under federal jurisdiction” as of 1934. Processing delays in trust land applications, additional bureaucratic red tape for potential economic investors, and confusion over legal jurisdiction are just a few of the consequences.

More importantly, the decision is a direct attack on tribal sovereignty. Indian trust land is the foundation of tribal economies and the only real federal protection of tribal authority from state and local governments.

NCAI is committed to the preservation of tribal sovereignty and ensuring a robust nation-to-nation between tribes and the federal government. We will continue to support and work with tribal leaders to advance these priorities.