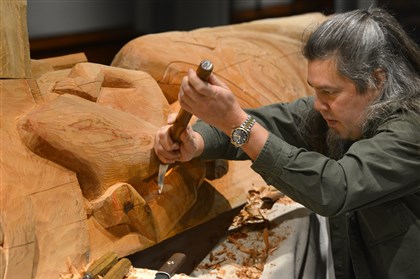 Darrell Sapp/Post-Gazette
Tommy Joseph, a member of the Tlingit people of southeast Alaska, uses a reverse bent knife to carve a 16-foot totem pole that will be permanently installed at the Carnegie Museum of Natural History.

The story of a raven, two fishermen and a salmon was emerging from the trunk of a Washington red cedar last week under the skilled hands of master carver Tommy Joseph. Today, he will complete the carving and on Saturday a public “Celebration of the Raising of the Totem Pole” will be held as it’s installed permanently in the Carnegie Museum of Natural History.

Mr. Joseph, a member of the Tlingit people of southeast Alaska, was born in Ketchikan and lives in Sitka. He began carving the totem pole, which was commissioned by the museum, on Nov. 26 in the R. P. Simmons Gallery, where he will be until 5 p.m. today. 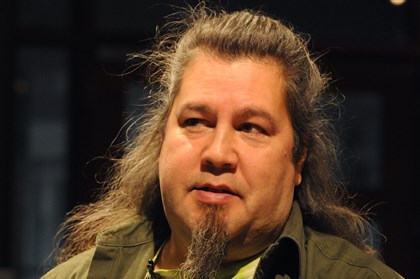 Darrell Sapp/Post-Gazette
Tommy Joseph, a member of the Tlingit people of southeast Alaska, talks about his totem pole sculpture.

The totem will be unveiled this weekend at the entrance of Polar World: Wyckoff Hall of Arctic Life and the Alcoa Foundation Hall of American Indians. The all-ages event will begin at 10:30 a.m. with Tlingit song and drumming by musician Morgan Redmon Fawcett. Following the celebration, Mr. Fawcett will play Native American flute, and guided tours of Alcoa Hall and other activities will be offered (included in museum admission).

The 16-foot tall totem pole is a blend of traditional and contemporary practices. The formal qualities of the bold stylized components, and the fact that they memorialize a story told by a Tlingit elder, are timeless. Mr. Joseph carves with hand tools that would have been recognizable generations ago, including an adz, gouges and knives, some of which he made. However, the vivid paints are latex.

When the museum commissioned the totem pole, it requested a story that included a raven but was otherwise unrestricted. That gave Mr. Joseph, 49, an opportunity to fulfill a project that had been on his mind for three decades.

“They told me I could pick any story. This story has never been told before. When I first heard it, I wanted to tell it,” Mr. Joseph said last week.

The description he gave the museum was of two young men on a hunting trip:

“While out on the open ocean with a storm approaching, a young man spotted a large seal and fired at it. He was happy to see that his aim was true, and he piloted his boat over to haul in his catch. The young man grabbed the seal by its tail, but it began to thrash about. So as not to lose it to the ocean waves and the approaching storm, he bit down on the tail, gripping hard between his teeth while grabbing the seal’s flippers with his strong hands and arms.

“In a boat not far away, the young man’s hunting partner and Clan brother was watching this entire scene unfold. He fired a shot into the seal, saving the catch. The hunt was a big success, and both men were able to bring food home to their families, along with an adventure story that would live on for generations to come.”

The raven, at the bottom of the totem pole, appears in Tlingit legends, myths and creation stories. The middle figures are the hunters in dugout canoes. The top figure, a dog-salmon, completes the circle of life, the seal eating the salmon and the people, the seal. 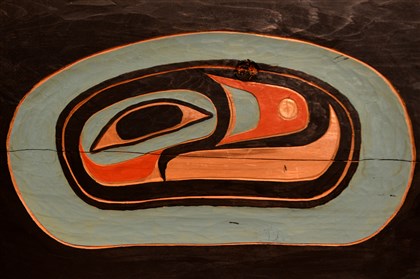 Darrell Sapp/Post-Gazette
One of the painted “trappings” on the Raven portion of the totem pole Tommy Joseph has been commissioned to carve for the Carnegie Museum of Natural History.

“A totem pole is a visual tool for telling a story,” he explained. “The whole purpose is to be a reminder of the story. [Subjects include] migration, individuals, groups of people, events, history, clan history; grave markers, mortuary poles that memorialize people.”

Mr. Joseph first became infatuated with wood when he made a halibut hook out of yellow cedar in a third-grade woodcarving class. His art includes Tlingit armor, masks and bowls in addition to totem poles. He sells them at his Raindance Gallery in Sitka along with work by other Alaskan native artists.

Funded by a Smithsonian visual artist grant and a USA Artist Fellows award, he traveled to 20 museums and collections in the U.S. and abroad in 2009 to study Tlingit armor. The Alaska State Museum, Juneau, presented the first exhibition of Mr. Joseph’s armor this year. In July, he gave a TED (Technology, Entertainment, Design) talk on constructing Tlingit armor.

At his gallery, he teaches carving in affiliation with the University of Alaska Southeast, Sitka Campus. “I always hope there’s going to be some of our young people who will be interested. But to keep [the tradition] going, I’ll teach anybody of any age who wants to know, as long as they’re old enough to work safely.” 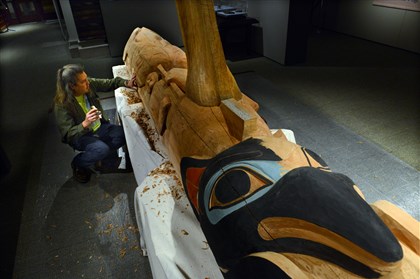 Darrell Sapp/Post-Gazette
Tommy Joseph works on the details of his totem pole.

For 21 years he ran the wood studio of the Sitka National Historical Park’s Southeast Alaska Indian Cultural Center. While there he observed leading wood conservators from the National Park Service and now he conserves, restores and replicates totem poles for the Park Service and other institutions and individuals.

“It’s a huge honor for me that [this totem pole] will be in the Carnegie Museum forever,” Mr. Joseph said. “I have the coolest job around. I get to go to work every day and make stuff, and share it with everybody.”

Tlingit artifacts including baskets, halibut hooks and objects relating to the totem pole creation process may be seen in the Simmons Gallery today through Friday. Information: 412-622-3131 or www.carnegiemnh.org.