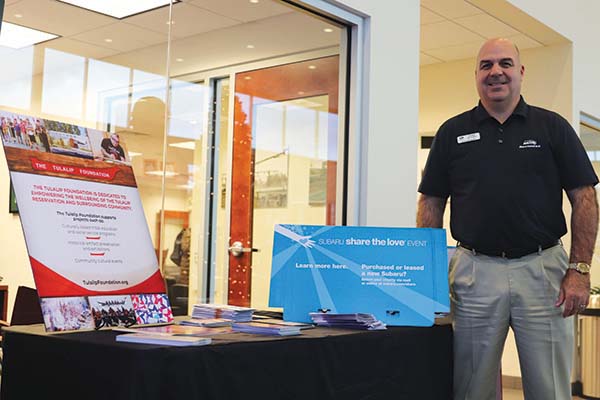 ARLINGTON — Two north Snohomish County cities are trying to curb panhandling by asking people to give to local charities instead.

Arlington and Marysville officials are working with local businesses to post signs and window stickers as part of a new campaign called “Keep The Change.”

“It’s okay to say no, just a simple no,” Arlington Police Chief Nelson Beazley said. “This community is tremendous so far as being a giving, caring community, but give appropriately.”

Beazley sees a link between the rise in panhandling problems and heroin use. Not all panhandlers are addicts, but those who are cause trouble, he said.

Panhandlers are creating traffic and safety concerns in Marysville as well, Mayor Jon Nehring said. Some are using their income — up to $90 a day — to buy drugs and alcohol, he said. They’re often seeking handouts a short walk from the local food bank.

“There are places to give the money where it will truly help the needy,” Nehring said. “What we’re trying to do is essentially stop the subsidization of the drug and alcohol habits for some of these folks who stand out there.”Nehring’s office received complaints from parents who said they were approached in parking lots while loading their cars up with kids and groceries, he said. In Smokey Point, young families reported similar issues outside a dance studio.

“Keep The Change” started in Marysville after local barber Kelly Muma learned of an initiative in southwest Washington. Muma and his wife own HotRod Barber Shop on State Avenue.

“I’ve been cutting the mayor’s hair since way before he became mayor,” Muma said.

They got to talking about the panhandling problem.”The community is so giving, but yet unfortunately we’re giving to the wrong people,” Muma said. “This is truly what this sign is about. Those who truly need the help know of the food bank, know of the centers to go to. It’s educating the general public.”

Police officers are limited in what they can do about panhandling, Beazley said. In most cases, the activity isn’t illegal unless it’s deemed aggressive or it becomes trespassing. An arrest or citation doesn’t always lead to a prosecution.

One of the downtown Arlington business owners who supported the campaign was Jeanne Watanabe, of The Silver Hanger consignment shop on N. Olympic Avenue. Business owners have been working closely with the police department since seeing an increase in illegal activity downtown, she said.

“We wanted to find out why it was occurring and what we could do about both helping people on the street and making sure the street stayed safe. It’s definitely two-fold,” she said. “Our community is amazingly rich with people who have a heart for helping people who are homeless. We have lots and lots of programs for that.”

Arlington has 10 “Keep The Change” signs posted in the Smokey Point and downtown shopping areas and about 100 window stickers have been distributed, said Paul Ellis, the city’s community and economic development director. More signs are planned.

Earlier this year, the Washington State Patrol also asked folks not to give to panhandlers at freeway ramps, citing concerns about traffic safety and pedestrian deaths. That message is ongoing, trooper Mark Francis said.

“Panhandlers are at even greater risk on I-5 on- and off-ramps due to the higher speeds,” he said. “We are citing panhandlers and arresting re-offenders on limited-access highways.”

You can research charities at the Secretary of State’s website, www.sos.wa.gov/charities/search.aspx, and at the state Attorney General’s website, www.atg.wa.gov/SafeguardingConsumers.aspx, under “Consumer Issues A-Z.”