Washington’s clean-water regulations to ensure the safety of eating fish from local waters are indefensibly lax, everyone agrees. That’s about to change, but without broader cleanup, water will still be polluted. 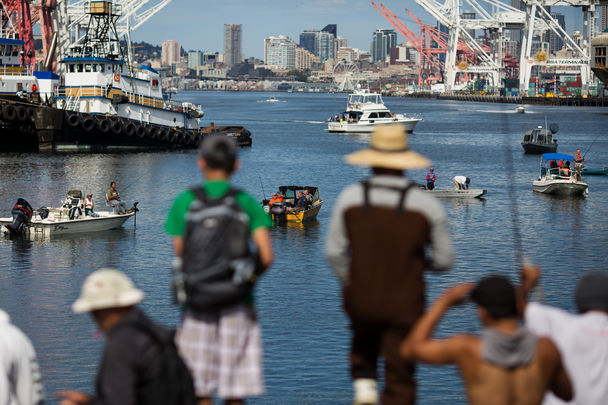 New proposed water-quality standards expected to be issued soon by the state are intended to more accurately reflect how much fish people eat. These fishermen were trying their luck for salmon running in the Duwamish River last September.
MARCUS YAM / The Seattle Times, 2013

Eat only as much fish as the state assumes you do every day, and you’d starve, for sure: It’s a chunk not much bigger than a Starburst candy.

But that could be about to change, under new regulations in the works at the state Department of Ecology. Washington seems likely to follow Oregon’s lead and set a water-quality standard for daily fish consumption at 175 grams, or about 6 ounces, per day.

The level is set not to regulate how much fish people eat, but how clean water needs to be. The standard sets pollution cleanup and control limits for industry, municipal sewage plants and other dischargers to local waters.

While it sounds like a modest step forward, implementing more realistic fish-consumption standards — Washington’s current standards are based on an outdated national average — has been a battle, chewing up years of effort and the political capital of two governors.

That’s because municipal sewage plants, pulp mills and other dischargers fear the cost of tighter pollution standards. Boeing famously entered the fray last year in widely reported warnings about the potential effect of unreasonable standards on its continued business operations.

“We support a water quality standard that protects human health and the environment, while at the same time, allows for the growth of our business and the state’s economy,” Boeing spokeswoman Megan Hilfer wrote in a statement to The Seattle Times in an email July 1.

No one contests that the new levels will in some cases result in setting pollution-discharge limits too tiny even to measure with existing technology.

Gov. Jay Inslee and the state Department of Ecology are expected to announce the new proposed standard Wednesday and to work toward issuing a draft rule after that. The regulations will go through a lengthy public-comment period and be finalized only with the approval of the U.S. Environmental Protection Agency, probably sometime next year.

The importance of water-quality standards to human health is well known, especially to people who eat a lot of fish. Because pollutants find their way from the uplands to the water, ultimately everything, for better or worse, winds up in the tissues of fish. Pollutants such as mercury and PCBs can cause a variety of serious illnesses and impairments, from cancer, to permanent IQ reduction in children. Pregnant women, the young and the frail are most at risk.

As the state develops commercially, the abundance of healthy fish from the state’s home waters has been slipping away. Toxics are just part of the problem. Habitat, every scientific report on salmon recovery shows, is the most important thing to securing abundant runs of fish for people and wildlife.

Yet the state is losing ground, literally, in runoff caused by development of uplands and cutting of forests.

And even as Seattle and King County water and sewer ratepayers spend hundreds of millions of dollars to clean up Puget Sound, the city of Victoria, B.C., continues to spew untreated sewage directly into the Salish Sea — prompting a dust-up with Inslee, but still no resolution of the problem.

Inslee inherited the fish-consumption wrangle from former Gov. Chris Gregoire, who failed to implement new regulations amid scorching opposition from businesses. As the struggle to get the standards updated roils behind the scenes in Washington, regulators in Oregon, and business leaders, are carrying on with that work behind them.

The Oregon Department of Environmental Quality has issued dozens of discharge permits since updating its standards in 2011, including permits for more than a half-dozen municipalities, a meatpacking plant and other industrial users. The path forward in Oregon required implementation of flexibility in setting timelines for compliance and variances, said Jennifer Wigal, water-quality program manager at the department.

A similar approach is in the works in Washington. Kelly Susewind, director of Washington Department of Ecology’s water-quality program, charged with drafting the regulations, said he wants to take the five-year time limits off compliance schedules and variances, to give regulators and dischargers a way to work out realistic solutions under new, more exacting standards.

Dennis McLerran, regional administrator for the Region 10 office of the U.S. Environmental Protection Agency, whose approval is required for Ecology’s regulations, said he backs flexible implementation.

“We are interested in working with the state on a package of implementation tools that includes compliance schedules, variances, intake water credits, even how you look at some chemicals. But we want to make progress. Otherwise, why do it?”

One place he is not inclined to budge, though, McLerran said, is cancer risk, because implementing a higher risk would allow bigger inputs of some pollutants to local waters. That could put people who eat a lot of fish at higher risk — and compromise treaty-protected fishing rights.

“Some of our high fish consumers when they signed on to transfer (their) lands, signed on to continue to harvest and eat fish, and when and if they can’t, then the treaty right is a bit vacuous,” McLerran said.

“From my perspective we want a standard that is protective, and protective of all people.”

A daily consumption standard of a little over 6 ounces of fish as set forth by Oregon — the highest standard in the country — is less than a typical half-pound filet an adult would have for dinner. And it’s a snack, compared with the estimated 2.2 pounds a day that the ancestors of Washington tribes were counting on when they signed the treaties with the U.S. government ceding tribal lands for non-Indian settlement.

And many common foods, from butter to chicken to tuna, have more PCBs in them than Puget Sound coho, according to an Ecology analysis.

The ubiquity of pollution is one reason Christie True, director of King County Natural Resources and Parks, said she hopes new state regulations don’t just crank down on pollutants at tiny levels in sewage discharges and other so-called point sources, but instead go after bigger sources of trouble in Puget Sound, including stormwater.

“We want to make sure whatever investments we are making make a substantial improvement in water quality,” True said. “If we just focus on the point-source discharge, we are missing huge opportunities. All of these things, arsenic, PCBs, dioxins, those are coming through our watershed through street runoff and rain runoff, these are getting washed into our water without any kind of control.”

Dianne Barton, water-quality coordinator for the Columbia River Inter-Tribal Fish Commission, which pushed Oregon to get started on updating its standards, and is deeply involved with other Washington tribes in setting new standards in Washington, said tribes want progress, but not at any price.

In many rural and suburban areas of the Northwest, tribes are among the largest employers, running all kinds of industries themselves, and they want cost-effective solutions that make a true difference too, Barton said.

“The tribes have always believed that this is not something we are going to achieve overnight,” Barton said. “We can get creative.

“Whether as we move forward that includes variances or resources we haven’t developed yet, we are committed to being actively engaged so we can move the (Columbia) Basin forward.”