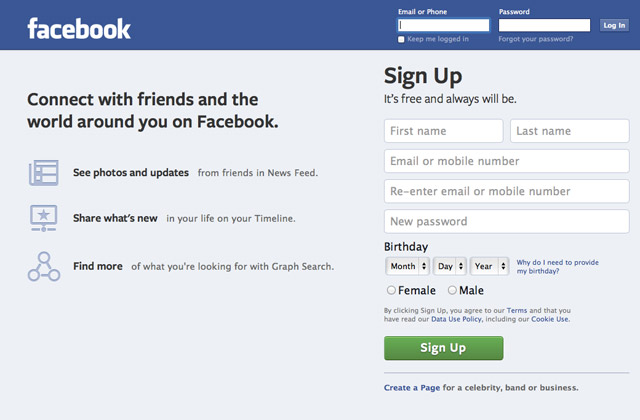 Dana Lone Hill tried logging on to Facebook last Monday only to be locked out because the social media giant believed that she was using a fake name. In an essay over at Last Real Indians, Dana, who’s Lakota and has been using Facebook since 2007, explains that she’s presented a photo ID, library card and one piece of mail to the company in an attempt to restore her account. The day after Lone Hill’s account was suspended she was able to access it briefly but she was then booted a second time.

In her essay Lone Hill says that this has happened to other Native users she knows:

I had a little bit of paranoia at first regarding issues I had been posting about until I realized I wasn’t the only Native American this happened to. One friend was forced to change his name from his Cherokee alphabet to English. Another was forced to include her full name, and a few were forced to either smash the two word last names together or omit one of the two words in the last name. Oglala Lakota Lance Brown Eyes was bootd from facebook and when he turned in his proof of identification they changed his name to Lance Brown. After contacting the Better Business Bureau and threatening Facebook with a class action lawsuit, they sent him an apology and let him use his given name again.

To reestablish a Facebook account after being accused of using a fake name, users must submit one government-issued ID such as a birth certificate, passport or voter identification card or two other forms of identification such as library card and a yearbook photo. The company appears to have been questioning certain Native users since at least 2009, when it deactivated Parmelee Kills The Enemy’s account. More recently, on Indigenous Peoples’ Day, Facebook deleted a number of Native accounts. In one case, the company asked users Shane and Jacqui Creepingbear for identification to prove that they weren’t using fake names. Shane took to Twitter to express his disappointment:

Via Facebook messenger, Shane says that the couple’s ordeal came to a swift end when he had some friends who work in the tech industry contact Facebook directly. Shane, who’s part of the Kiowa Tribe of Oklahoma, says that he and Jacqui have “administrative shields” on their Facebook accounts and that their names will no longer be questioned.

“It’s a problem when someone decides they are the arbiter of names,” says Shane. “It can come off a tad racist.”

Facebook’s 10-year-old real-name policy stipulates that users “provide the name they use in real life.” However, the social network doesn’t require people to use their legal names, according to an open letter the company’s chief product officer, Chris Cox, posted last October. In the letter Cox apologizes to ”drag queens, drag kings, transgender [people], and [to the] extensive community of our friends, neighbors and members of the LGBT community” whose accounts had been shut down after a user reported hundreds of them as fake. At press time no such apology has been issued to Natives.

In a statement to Colorlines, a Facebook spokesperson wrote:

“Over the last several months, we’ve made some significant improvements in the implementation of this standard, including enhancing the overall experience and expanding the options available for verifying an authentic name. We have more work to do, and our teams will continue to prioritize these improvements so everyone can be their authentic self on Facebook.”

The spokesperson also told Colorlines that any idenitification provided by users is reviewed and verified by a single Facebook employee and then immediately destroyed—which may calm some privacy concerns.

Lone Hill, who went by Lone Elk until she found her birth certificate last summer, tells Colorlines that she submitted her documents to the company last Tuesday only to receive an automated e-mail asking for even more documents—“credit cards, Social Security numbers, stuff I’m not comfortable sending.” Lone Hill says she misses having access to her nearly 2,000 Facebook friends and doesn’t know if she’ll ever be able to recover photos of her four children that she stored in her account.

A petition demanding Facebook change its policy toward Native names, started about four months ago, has garnered more than 9,000 signatures.

Update, 4:14p ET
Dane Lone Hill’s account was restored by Facebook today after being suspended for the better part of a week. Lone Hill had posted about her ordeal on Last Real Indians on Friday, which Colorlines picked up and published a post about Monday. In an email addressed to Lone Hill at 2:58p ET and forwarded to Colorlines, Facebook explained:

It looks like your account was suspended by mistake. I’m so sorry for the inconvenience. You should now be able to log in. If you have any issues getting back into your account, please let me know.