RIO DE JANEIRO — Pope Francis took on the defense of the Amazon and the environment near the end of his weeklong trip to Brazil, as he donned a colorful Indian headdress Saturday and urged that the rainforest be treated as a garden.

The pontiff met with a few thousand of Brazil’s political, business and cultural elite in Rio de Janeiro’s Municipal Theater, where he also shook hands with Indians who said they were from a tribe that has been battling ranchers and farmers trying to invade their land in northeastern Bahia state.

In a separate speech to bishops, the pope called for “respect and protection of the entire creation which God has entrusted to man, not so that it be indiscriminately exploited but rather made into a garden.”

He also urged attention to a 2007 document by Latin American and Caribbean bishops that he was in charge of drafting, which underscored dangers facing the Amazon environment and the native people living there. The document also called for new evangelization efforts to halt a steep decline in Catholics leaving for other faiths or secularism.

“The traditional communities have been practically excluded from decisions on the wealth of biodiversity and nature. Nature has been, and continues to be, assaulted,” the document reads.

Several of the indigenous people in the audience hailed from the Amazon and said they hoped the pope would help them protect land designated by the government as indigenous reserves but that farmers and ranchers illegally invade for timber and to graze cattle. In fact, grazing has been the top recent cause of deforestation in Brazil.

“We got credentials for his speech and attended so we could tell the pope what’s happening to our people,” said Levi Xerente, a 22-year-old member of the Xerente tribe in Tocantins state in the Amazon, after he attended the pope’s speech. “We hope that he will help intervene with the government and stop all the big public works projects that are happening in the region.”

Xerente, speaking in broken Portuguese, said the biggest threats to Indians in the region were big agribusiness invading land and the government’s own massive infrastructure projects, including the damming of rivers for hydroelectric power generation and roads being carved out of the forest, often to reach giant mines.

Francis thanked Brazilian bishops for maintaining a church presence in the rugged and vast Amazon, which is about the size of the United States west of the Mississippi River. But he pushed church leaders to refocus energies on the region.

“The church’s work needs to be further encouraged and launched afresh” in the Amazon, the pope said in prepared remarks, urging an “Amazonian face” for the church.

He cited the church’s long history of working in the region.

Catholic priests and nuns have taken up the causes of Indians and of poor subsistence farmers in the Amazon, often putting themselves in danger. Violent conflicts over land rights are common in the region, where wealthy farmers and ranchers are known to hire gunmen to intimidate people into leaving land the government has often set aside as reserves for their use.

In 2005, U.S. nun and Amazon land-rights defender Dorothy Stang was murdered by one such gunman in the state of Para. Two ranchers were later convicted of ordering her murder so they could control a parcel of land the government had ceded to a subsistence farming group Stang worked with.

Brazil’s military has moved in to stop illegal logging around the land of Earth’s most threatened tribe.
© Exército Brasileiro

Survival International has received reports that Brazil’s military has launched a major ground operation against illegal logging around the land of the Awá, Earth’s most threatened tribe.

Hundreds of soldiers, police officers and Environment Ministry special agents have flooded the area, backed up with tanks, helicopters and close to a hundred other vehicles, to halt the illegal deforestation which has already destroyed more than 30% of one of the Awá’s indigenous territories.

Since the operation reportedly started at the end of June, 2013, at least eight saw mills have been closed and other machinery has been confiscated and destroyed. 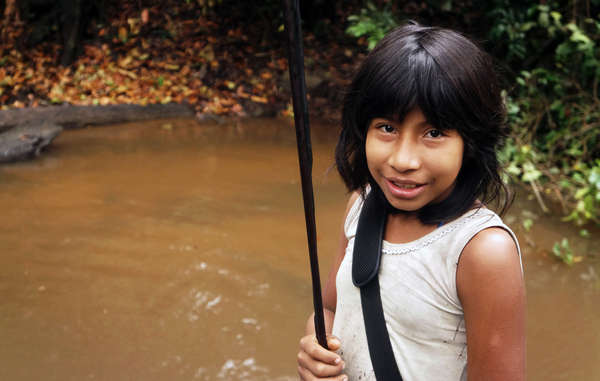 Little Butterfly, an Awá girl. The Awá have pleaded for all illegal invaders to be evicted from their forest.
© Sarah Shenker/Survival

The operation comes at a critical time for the Awá, one of the last nomadic hunter-gatherer tribes in the Brazilian Amazon, who are at risk of extinction if the destruction of their forest is not stopped as a matter of urgency.

But while the operation is making it more difficult for loggers to enter Awá territory and remove the valuable timber, the forces have not moved onto the Awá’s land itself – where illegal logging is taking place at an alarming rate and where quick action is crucial.

Amiri Awá told Survival, ‘The invaders must be made to leave our forest. We don’t want our forest to disappear. The loggers have already destroyed many areas.’ 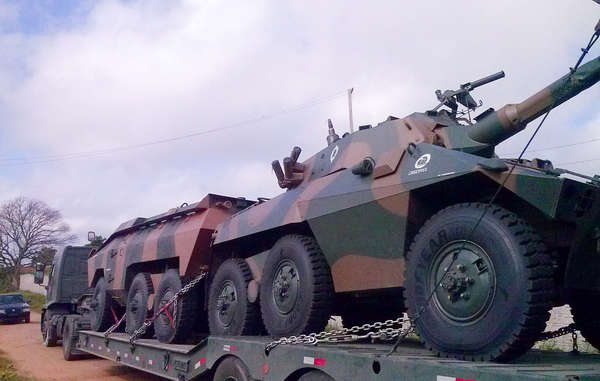 Tanks, helicopters and close to a hundred vehicles have been deployed to protect the forest.
© Maycon Alves

Tens of thousands of people worldwide, including many celebrities, have joined Survival International’s campaign urging the Brazilian government to send forces into the Awá’s territories to evict the illegal invaders, stop the destruction of the Awá’s forest, prosecute the illegal loggers and prevent them from re-entering the area.

Survival’s Director Stephen Corry said today, ‘Brazil has taken a promising first step towards saving the world’s most threatened tribe, and it’s thanks to the many thousands of Awá supporters worldwide. This is proof that public opinion can effect change. However, the battle is not yet won: the authorities must not stop until all illegal invaders are gone.’