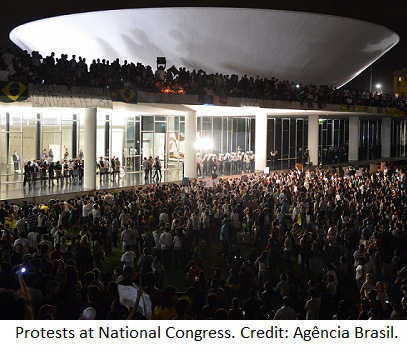 Emerging as a complete surprise, the wave of massive demonstrations Brazil has been experiencing is undoubtedly the most serious movement of popular protests in the country since the dictatorship years. On June 10th, 2013, the first peaceful demonstration took place in São Paulo, near one of the main business streets, Avenida Paulista.  After mobile phone videos spread across the internet, showing clear evidence of the violent repression of the protest by the military police, masses of people hit the streets of São Paulo in a cry for their right to demonstrate.

For the first time, young Brazilians saw the military police, renowned for violent actions around the poorer or isolated areas, attacking and arresting hundreds of economically privileged citizens. Despite the efforts from the largely conservative national media to play down the violent actions, a number of key videos were recorded in different areas of the city on the 13th of June and virally spread through social media. These videos showed how groups of protesters chanting for “no violence” were indiscriminately attacked by the extensive use of tear gas, rubber bullets, batons and pepper spray. Victims of the repression included journalists shot at head level and in their eyes.

The acts were mainly organized by ‘Movimento Passe Livre’ (Free Fare Movement), a group campaigning against public transport fare rises since 2005 and struggling for the right to ‘free fares’ for all citizens to travel on public transport in Brazil. A similar measure was first proposed in 1990 by the former São Paulo PT mayor, Luiza Erundina, who had to face the so-called ‘bus mafia’ as well as a chain of reactions from big businessmen from the construction and retail sectors in the city.

The first protests, in São Paulo, marked the beginning of what Marilena Chauí, philosopher and retired lecturer at University of São Paulo (USP) affirms to be a ‘very important political moment’ for the development of Brazilian democracy.  On June 18th, the streets of various cities were taken over by crowds, and that same evening the National Congress building in Brasilia was surrounded by protesters, taking a combination of artistic and political action.

“Oscar Niemeyer [a well-known Brazilian architect and socialist] would have been so proud last night! The unity of art and political action! His beautiful congress building decorated and enhanced by a new generation of radicals on the roof, demanding change, an end to corruption and no more collaboration with the greedy FIFA (International Federation of Association Football) Mafia,” wrote Andrew Jennings in A Pública.

The images of the police repression in São Paulo seem to have represented the last straw for the over one million people that have taken to the streets and mobilized around the country. However, at the same time, protesters have been similarly repressed in Brasilia, Fortaleza and Minas Gerais outside the football stadiums where the Confederation Cup matches have taken place.

The protesters’ indignation around the stadiums are based in part on the exorbitant ticket prices – which means that ordinary Brazilians will not be able to attend the events. People are also outraged at the use of the billions of public funds for the cost of stadiums and facilities. According to one calculation, this cost is the equivalent of the R$38 million federal education budget and, to a lesser extent, the countless cases of human rights violations against populations living near the stadiums or other sports facilities, who have been evicted, often violently, to make away for the ‘improvements.’

Natalia Viana, director of A Pública, the main center for investigation and independent journalism in Brazil, declared in a recent interview with the Chilean outlet America Economía that around 170,000 people have been at some point under risk of losing their homes because they are in the way of the World Cup or the Olympic projects, stadiums, and highways. “The city [mainly Rio de Janeiro, but other areas have also been affected] is being changed in a very authoritarian way, without competent and democratic consultation or negotiation with all communities,” Viana explained. In addition, the economic abuses related to those projects have also spread around the country. Rio’s Maracanã stadium alone has gone through three sets of major refurbishment works in the last 15 years, at a total cost of around US$700 million, and the Brasilia stadium is costing about US$ 270 million, one of the most expensive of the six being built ahead of the World Cup warm-up tournament.

Even though both the Governor of São Paulo state, Geraldo Alckmin (PSDB), and the Mayor of São Paulo city, Fernando Haddad (PT), announced on June 19th the reduction of the public transport fares, the next day activists in 322 cities and 22 capitals were mobilized around the country.

On June 21st, the president Dilma Rousseff, a former leftist guerrilla who was tortured under Brazil’s long military dictatorship, made a televised 10-minute appearance backing the right to peaceful protest but sharply condemning violence, vandalism and looting from the protesters.  In contrast, Rousseff notably ignored the police’s violent action during the first days of protests in São Paulo, or around the stadium in Brasilia and other capitals. She even ignored previous and, unfortunately, common-place conflicts such as the constant clashes in Rio de Janeiro’s favelas or with Indigenous people around the Amazon region, conflicts related to soy production and cattle farms in Mato Grosso and Mato Grosso do Sul states. The giant may have woken with these recent protests, as some have claimed, but those on the margins of Brazilian society have never gone to sleep…

A recent opinion poll indicates that Brazil’s Federal government has considerably lost popularity over the last two weeks. According to Gilberto Maringoni, journalist and PhD in history from the University of São Paulo, those numbers do not attest to anything exceptional. However, he alerts, Brazil is currently on the edge of a crisis; even though the levels of consumption and employment are not falling, he affirms, in macro-economical terms, the Brazilian GDP promises to be ‘mediocre’ by the end of the year.

During the years of Luiz Inácio Lula da Silva (Lula), the previous president, many Brazilians experienced the consumer power for the first time in their family history. Those previously on the edge of the market economy could now buy a TV, a car, a refrigerator, and other basic consumer goods.  However, outside their homes people still find a decaying public service system, high cost and bad quality transport, lack of books, equipment, and motivated teachers at public schools, a very poor health system, and growing levels of violence around the cities.

“Brazil has improved significantly over the last 10 years. However, the environment is still being destroyed, chaos is taking over the cities, there is no sign of agrarian reform, the mainstream media is associated with the Federal government, the financial sector carries on demanding a radical shift towards [neoliberal] economic orthodoxy and Dilma [Rousseff] is wholeheartedly following her creed of privatization,” Gilberto Maringoni wrote recently in Carta Capital.

Many analysts have expressed their hope that this current uprising is a sign of the general public awareness that political change is desperately needed in Brazilian politics. At the same time, people are concerned that 2013 doesn’t end the same way 1968 did in Brazil, when student protests were brutally crushed by the military government. Furthermore,Werneck Vianna, a renowned Brazilian social scientist, said: “If nothing is done in time, this movement could end in a very bad way. […] young people disenchanted with politics, radicalized and who will look for the wrong ways to solve their problems.”

The extraordinary demonstrations in Brazil, which have practically taken over all big cities, and are active in many in rural areas, have been showing to the Brazilians, and to those interested to learn about this Latin American giant, the complexity of its political condition. After numerous days of protesting, many people still did not know exactly why they were protesting.  This lack of focus and political maturity is just a symptom of the distance between the population and Brazilian politics.

In a letter signed by over 30 Brazilian social movements to president Dilma Roussef, these groups analyze the recent mobilizations as a very positive step in a process of political education of the mostly young demonstrators. It is, they affirm, a cry of anger from people who have been historically alienated from the political life of Brazil, and who tend to think of politics as something damaging to society. The letter explains that this movement will likely lead youth to realize the desperate need to confront the powerful in Brazil, demanding economic equality and reforms, and greater access to healthcare, education, land, culture, media and political spaces.  In the letter, the social movement groups also affirm that the conservative sectors of the society are trying to co-opt the demonstrations and spin their meaning to the media.

Connected through the internet and different social media platforms, people around Brazil and abroad have also been protesting in solidarity with Brazil, and tying the protests there to other mobilizations around the world. Both Turkish and Brazilian activists, (who have been attacked by the same brand of tear gas), have been sharing much of their experiences online, such as how to make D.I.Y. masks against tear gas, and sharing images of protests signs in support of their counterparts across the world. Solidarity demonstrations have also been organized in different cities around Europe and the US, where we could see both Turkish and Brazilian flags raised.

Eliane Brum, a Brazilian journalist, writer and documentary maker, has recently recalled the words of the Uruguayan writer Eduardo Galeano, recorded on video around two years ago during the widespread protests in Spanish against economic austerity measures. Galeano’s message to the young people who went to the streets of Barcelona, Madrid and other cities in the country was translated into many languages and shared extensively online: “This shitty world is pregnant with another one.” Just like Brum, many people are hoping Galeano is correct, and that we can all exist in another kind of world, where there is space for life.