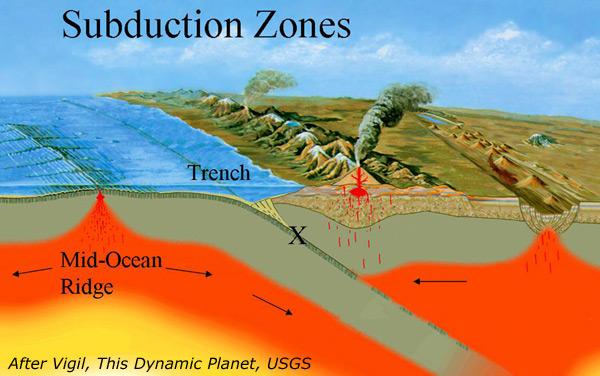 U.S. Geological Survey/AP Photo
The mechanics of a subduction zone.

The Cascadia fault in the Pacific Northwest is locked up, meaning that a massive megathrust earthquake could occur at any time, seismologists are warning.

“It’s impossible to know exactly when the next Cascadia earthquake will occur,” said Evelyn Roeloffs of the U.S. Geological Survey, speaking last year on the 313th anniversary of a massive quake that hit in 1700—the last major one in the region. “We can’t be sure that it won’t be tomorrow, and we shouldn’t make the mistake of assuming we have decades to prepare.”

The tectonic plates normally glide and rub against each other, but periodically they become wedged together. When the fault quits sliding and becomes “locked” in place, it builds energy until it finally ruptures, relieving hundreds or thousands of years of stored-up stress in seconds, Roeloff said.

Now, earthquake scientists from Canada and the U.S. who monitor seismic activity along the Cascadia coast have concluded that the dangerous fault line is fully locked, which carries serious implications for an earthquake in the Pacific Northwest.

“What is extraordinary is that all of Cascadia is quiet,” University of Oregon geophysics professor Doug Toomey told the Associated Press earlier this month.

Research on the Cascadia Subduction Zone in 2012 and 2013 led researchers to similar conclusions.

A big unknown, Toomey told AP, is how much strain has accumulated since the plate boundary seized up, and how much more strain can build up before the fault rips and unleashes a possible magnitude 9.0 megaquake and tsunami.

“If there were low levels of offshore seismicity, then we could say some strain is being released by the smaller events,” Toomey told AP. “If it is completely locked, it means it is increasingly storing energy, and that has to be released at some point.”

Toomey said he is “very concerned” and said it is imperative that people in the Northwest continue to prepare for a big earthquake.

Cascadia’s Subduction Zone is a very long, very dangerous undersea fault that divides the Juan de Fuca oceanic and the North America continental plates. It runs from British Columbia down through Washington and Oregon and into northern California, as does a volcanic mountain range.

The fault has produced at least seven magnitude 9.0 or greater megathrust earthquakes in the past 3,500 years, a frequency that indicates a return time of 300 to 600 years.

The massive earthquake on the night of January 26, 1700, was one of the world’s largest. The Cascadia fault ruptured along a 680-mile stretch, from the middle of Vancouver Island to northern California, producing tremendous shaking and a huge tsunami that swept across the Pacific.

The oral history of the Makah Tribe in Washington tells of a huge earthquake that happened in the middle of the night long ago. Those who had heeded their elder’s advice to run for high ground survived. After spending a cold night in the hills with animals that also had fled the rushing waters, the survivors found that their village, along with neighboring coastal villages, had completely washed away, leaving no survivors.

Today it’s quite common to see cars backed into parking spaces in the tribal coastal villages in Washington so that in the event of a tsunami warning, drivers can make a fast getaway to higher ground. And at least one tribe, the Quileute Nation, is moving its coastal village away from the tsunami danger zone.

An emergency kit and plan are important first steps in being prepared. Download the Red Cross Earthquake Safety Checklist to learn more. Those with smart phones can text “GETQUAKE” to 90999 or search “Red Cross Earthquake” for their mobile app in the Apple App Store for iPhones or Google Play for Android.

Clues from a crater-like sinkhole on the island of Kauai point back to a giant wave that came from Alaska at about the time European explorers were pushing west, seeing the Mississippi River for the first time. 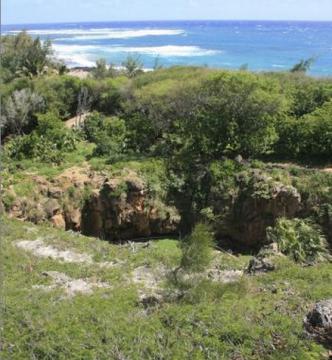 The Makauwahi Sinkhole on Kauai, which contains ocean deposits carried there by a tsunami, probably generated from an earthquake off the Aleutians about 500 years ago.

The Makauwahi Sinkhole on the southeast shore of Kauai holds the mysterious equivalent of about nine shipping containers full of rocks, corals and shells from the Pacific Ocean. For the material to breach the amphitheater-like limestone walls of the feature required a wave about 25 feet high, said Rhett Butler of the Hawaii Institute of Geophysics and Planetology in Honolulu. Butler gave a presentation on the subject at the Fall Meeting of the American Geophysical Union held in San Francisco in December 2013.

That wave probably came from a great Aleutian earthquake, Butler said. The tsunami probably struck between the years of 1540 and 1660, according to dating of the organic materials within the sinkhole.

The great tsunami story starts with David Burney’s explorations of caves within the limestone complex. While Burney, an archaeologist, ecologist and director of conservation with the National Tropical Botanical Garden of Kauai, was trowling for and finding evidence of ancient people, he also discovered the layer of ocean materials about six feet below the surface.

Butler noticed Burney’s work and wondered how large a tsunami needed to be to breach the most vulnerable eastern wall of the sinkhole. He dialed up tsunami-generating earthquakes on a computer model until he found one that was plausible.

“A magnitude 9.25 in the eastern Aleutians gives us an 8-meter (about 25-foot) wave,” Butler said. “It gets (the sinkhole) wet. Smaller events do not get it wet.”

The tsunami Butler modeled had some collaborating evidence revealed at the same conference in San Francisco. The subject of last week’s column was a revealing hole on Alaska’s Sedanka Island first dug by Gary Carver of Kodiak. That research pit, inspired by a tsunami-carried driftwood log high above tideline, shows the sandy evidence of six big tsunamis, each spaced about 300 years apart. One of those sand deposits dates to the late 1500s. The wave that carried that sand might be the same tsunami that surged more than 2,000 miles and topped the wall of the Kauai sinkhole.

Butler, who lives in Honolulu, sees the evidence for a past great tsunami as a warning sign.

“Could an event like that happen here?” he said. “What are the ramifications for Hawaii?”

Current Hawaii tsunami inundation maps underestimate the water that would come from an earthquake similar to the one that soaked the sinkhole, Butler said.

“The beach (on Oahu) where President Obama spends Christmas gets entirely flooded,” he said. “(Oahu’s main) power plant is at 7.3 meters above sea level, and we could get run ups to 15 meters.”

His modeled epicenter for the earthquake that would have sent the tsunami to Kauai was in the Aleutian trench somewhere between Adak and Unimak islands.

“It was (located) between the 1946 and 1957 events, in an area focused right at us,” he said. “It looks like this one has happened before. There’s potential there and we have to confront that. This doesn’t mean it’s going to happen, but no one likes a surprise. A lot of people were surprised by Tohoku (Japan’s 2011 earthquake and tsunami).”