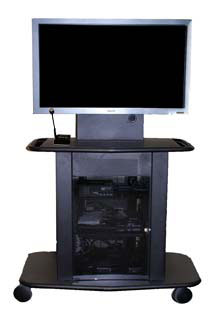 ALBUQUERQUE (KRQE) – When it comes to the annals of government waste, the Enhanced Learning and Knowledge Network ranks up there with the best – or worst – of them.

“Somebody dreamed this up and just went charging down the road and spending all this money,” said Sen. Tom Udall, D-NM. “In this case, a significant amount of money that could have helped very needy individuals has been wasted and that’s what’s very unfortunate here.”

Called “ELKNet” for short, the project was an educational television network that broadcast – albeit briefly – from studios in Albuquerque to about 200 Bureau of Indian Affairs-run schools across the country. The federal government spent an estimated $10 million on the project, operated it for just 21 months, then abruptly and unceremoniously pulled the plug about a year ago.

Today, the expensive equipment sits idle in Albuquerque and in remote school closets all across Indian Country in New Mexico and the United States. And, according to a Larry Barker investigation, students received zero benefit from those millions of taxpayer dollars.

“I hear about great ideas all day long, and they are all wonderful,” said Rep. Michelle Lujan Grisham, D-NM. “But not all of them are cost-effective and not all of them can be implemented.”

The basic goal of the project was to use digital technology to bring the latest in high-tech, interactive learning to some of the most remote schools in America. To that end, the Department of Interior – which spearheaded the program – spared no expense.

For example, the government bragged that its multi-million-dollar broadcast studio in Albuquerque “rivals any commercial TV network,” according to government materials promoting the project. That facility included robotic high-definition cameras, a control room, a production studio and editing suites.

The Department of Interior spent $2.4 million to install satellite receivers, 42-inch LCD monitors and DVD recorders at those 200 BIA schools. Programming was transmitted via a $650,000 satellite uplink, while the government spent another $500,000 a year on satellite transponder fees.

The network premiered in 2009, and featured programming like President Barack Obama’s back to school message in September of that year. In March 2010, ELKNet broadcast a program entitled “Why They Should Graduate,” while September 2010 featured a “Youth Listening Session.”

The network’s swan song was a discourse by professional golfer Notah Begay in April 2011 about healthy lifestyles.

Then, 21 months after it began transmitting, the Department of Interior pulled the plug on ELKNet. The announcement ending the program, made by email, said, “The government no longer has a need for the satellite … and will no longer have the funds for the system.”

And just like that, the government’s experiment in educational TV for Native Americans was over.

Morris Gaiter, distance learning coordinator for the network, said the project left him with the bitter taste of disappointment.

“I’m a taxpayer too,” he said. “That’s my money, too, that’s going, and I felt like it just wasn’t being utilized the way it should.”

According to News 13’s investigation, only a handful of students at the 47 BIA schools in New Mexico watched the ELKNet broadcasts. Some programs had no New Mexico participation.

“We’ve never had instructions on how to use the equipment,” said Dr. Tamarah Pfeiffer, superintendent of the Alamo Navajo School located north of Magdalena. “In three years, it’s just been equipment standing in a room.”

It was the same story at the BIA’s Wingate Elementary School outside Gallup.

“At Wingate, to be honest, there was no long distance education yet,” said Charlotte Begay, former principal. “We were just barely getting into that when it was shut down.”

The expensive ELKNet equipment at Borrego Pass School, another BIA institution, was used, said Rebecca Vesely, head of the school. However, it was used to help students keep up on current events by watching the news on CNN and other news channels.

News 13 attempted to find someone to take responsibility for the multi-million-dollar federal government boondoggle. And it was only after threatening to take the matter up with then-Interior Secretary Ken Salazar that the department trotted out BIA Director Mike Black for an interview.

“My perspective would be, yes, the program was a success,” he said. “It was basically … it comes down to a budget and resource issue.”

However, when asked how spending $10 million on a program that achieved zero participation could be characterized a success, Black changed his tune and admitted he didn’t know about the participation rate, and was surprised by those facts, which his agency supplied to News 13.

“Not knowing the full facts and everything that’s there, yes it would surprise me,” Black said. “I didn’t know that, sir. Nobody’s made me aware of that, no.”

Today, ELKNet studios in Albuquerque is empty of people, though the pricey technology remains. At Tse’ll’Ahi Community School – also known as Standing Rock – near  Crownpoint, the equipment is used to play DVDs. The Borrego Pass equipment is stored in a closet, while at Alamo, the LCD monitor acts as nothing more than an expensive message board.

Udall admitted that government isn’t supposed to work this way.

“Somebody got a great idea,” said Udall, who serves on the Senate’s Indian Affairs Committee. “They said, ‘Let’s take a couple million dollars and spend it on all this equipment and get everybody inter-linked.’ But then nobody wanted to come and look at it. That’s not a very good use of taxpayer money.”

Lujan Grisham, who serves on the House Oversight and Government Reform Committee, said government agencies need to be more careful about spending taxpayer money on grandiose and unrealistic plans.

“The lesson to the Department of the Interior is they have to be better-prepared to manage these ideas,” she said.