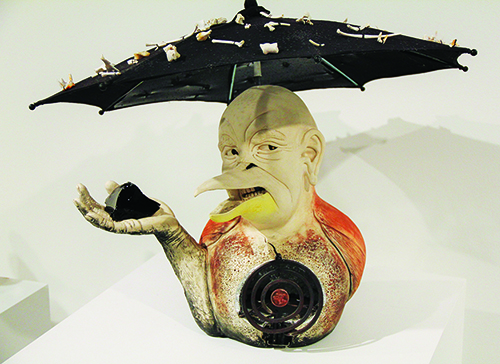 Kookaburra/Recalecense. Richard Rowland (Native Hawaiian). 2005. Clay, marsupial bones, umbrella, stove top element, obsidian. “The works I sometimes make are directly associated with the idea of transformation, adaptability, and the responsibilities I feel toward my culture and toward my community of people, animals, and the whole natural world. I use natural materials in an organically abstracted way that expresses who I am and where I came from – mainly my ancestral beginning, which are deeply rooted somewhere between the landscape and the heavens.”

The House of Welcome Longhouse Education and Cultural Center located at Evergreen State College in Olympia is celebrating 20 years of groundbreaking work. Work that emphasizes promoting indigenous arts and cultures through education, cultural preservation, and creative expression. The House of Welcome celebrates the essence of that work with its latest exhibition, Building Upon the Past, Visioning Into the Future. 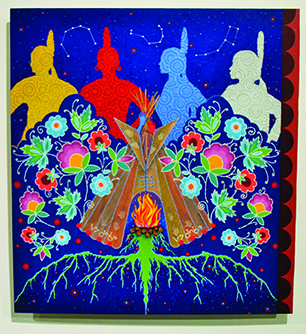 We Are One Bond. Chilling Taha (Cree/Iroquois). Acrylic on plywood.

Curated by Longhouse staff members, Erin Genia (Sisseton-Wahpeton Oyate) and Linley Logan (Seneca), the exhibition features the works of artists from this land, local Squaxin Island, Skokomish, Puyallup and many other Salish tribes. Tribes from across the nation are also represented, from Alaska, the Plains, and across the Pacific Rim, including Kanaka Maoli artists from Hawaii and Maori artists from New Zealand. 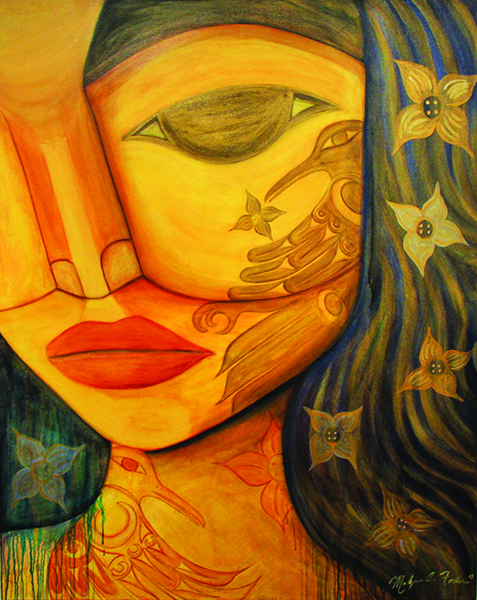 The subjects and techniques exhibited by the Longhouse artists draw from a diverse range of stylistic traditions, which arise from cultural teachings, ancestral lineages, and each artist’s unique experiences as indigenous peoples.

The exhibition was on display from March 31 – May 11. The House of Welcome was gracious to allow syəcəb staff a private tour of the exhibition so that we could share amazingly creative and exceptional Native art with our readers. 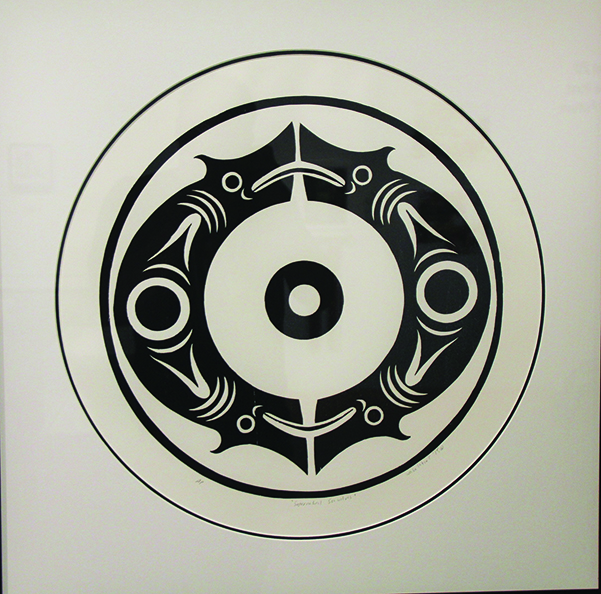 Supernatural Seawolves. Joe Seymour (Squaxin Island and Acoma Pueblo). 2015. Acrylic on paper. “Supernatural Seawolves is a reproduction of an old spindle whorl that I studied at the National Museum of the American Indian (NMAI) in Washington D.C. My trip to the NMAI was made possible through the National Native Creative Development grant through the Longhouse. The design shows two double-headed seawolves. I created this print while working with Lisa Sweet in Artistic Inquiry: Relief Printmaking program during the 2015 Spring quarter at TESC.” 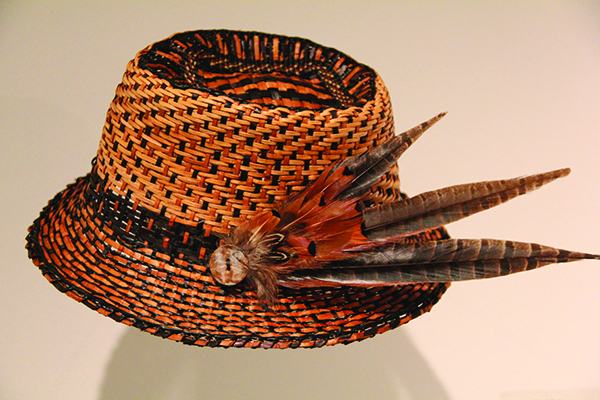 Swimming Together. In 2015, Artist-in-Residence and Longhouse grantee Nora Naranjo Morse (Tewa) conducted a two-week workshop to create a clay fish installation that will be installed on the future Indigenous Arts Campus at the Evergreen State College. In preparation for the workshop, Nora harvested and processed clay from Santa Clara and Taos Pueblo in the traditional way. Under the guidance and expertise of Nora, the Longhouse staff team joined with community artists to hand-build ceramic fish from the beautiful micaceous clay provided. Together, the tribal participants represented many different regions of the U.S. At the start of the workshop, the group came together to tell fish stories form their tribes. “Swimming Together” represents the connection of Indigenous peoples to the land and sea, and people of many cultural backgrounds working and learning together. This installation is a selection of the fish created during the workshop. 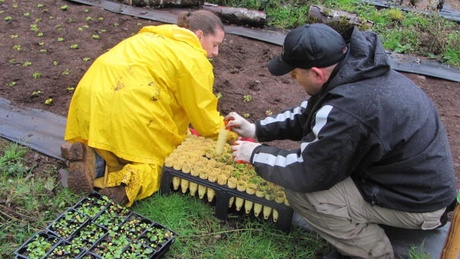 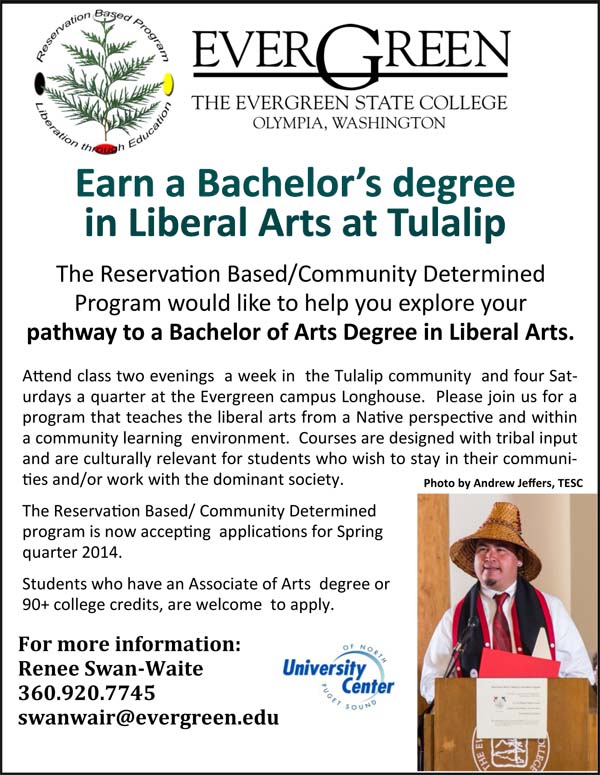 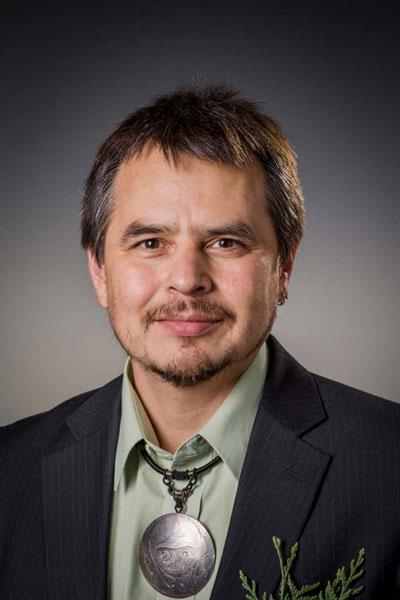 With the goal of deepening and expanding relationships with tribal governments in the Pacific Northwest, The Evergreen State College in Olympia, Washington has named former Makah tribal chairman Micah McCarty to the new post of Special Assistant to the President for Tribal Government Relations.

McCarty is working with the Washington state-based Tribal Leaders Congress on Indian Education to review curricula and educational pathways for Native students, from the Head Start program up to the Ph.D. level. McCarty has also established a relationship between local tribal governments and the college’s newly formed Center for Sustainable Infrastructure to improve tribal water systems.

Some 4.5 percent of current Evergreen students are Native American. Evergreen hosts the Longhouse Education and Cultural Center, the first Native longhouse built on a public college campus in the U.S. The college also offers a master of public administration degree with a concentration on tribal governance, a program of study on Native American and world Indigenous Peoples, and sponsors a reservation-based program where classes are offered locally and the study topics are determined in partnership with tribal authorities.

“Tribal governments are great educational resources, because of their growing diversity in expertise. It only seems logical that we find more ways to work together for the advancement of education as a whole,” said McCarty. “Long-term tribal leadership is based on interdisciplinary experience and creative thinking—both of which are great Evergreen attributes,” he said.

In the Seattle Times 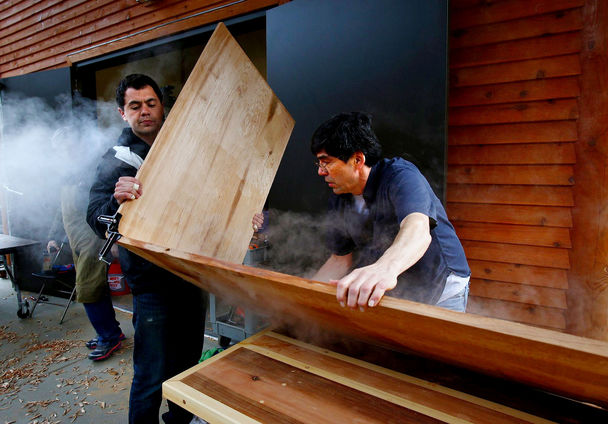 It’s the scent that hits you first: cedar. Pungent yet sweet, overpowering and cleansing.

The source was soon obvious: a stack of gigantic, old-growth cedar planks, awaiting the first students in the new carving shed just opened at The Evergreen State College. They started Saturday and will spend the next two weekends with David Boxley, a Tsimshian master carver based in Kingston, Kitsap County, learning how to make cedar bentwood box drums.

The class is the inaugural program in the shed, built with part of a $500,000, three-year grant from the Ford Foundation. The shed is envisioned as the first of very big things to come at Evergreen, with the launch of a new master’s of fine arts degree program in indigenous arts, the only one of its kind in the Lower 48, said Tina Kuckkahn-Miller, director of the Longhouse Education and Cultural Center at Evergreen.

The carving shed is intended as the first building of more to come to house the program, she said.

Awe-struck by the big, beautiful planks, some of the students had to settle down before making their first cuts. It wasn’t just the wood — though a single slab of old-growth cedar more than 3 feet wide is an awesome material to work with. It was also the realization that carving in the tradition of their ancestors isn’t just any job.

“We are about to push our canoes out; don’t take this lightly,” Boxley said before beginning class.

“What you are about to do has been done for thousands of years. Wood is being bent for the right reasons. Not for commercial purpose, but for our ceremonies. To uplift our culture,” Boxley said.

“Try really hard. Don’t get frustrated. And at the end, hopefully there will be 10 box drums, ready to make some noise.”

In addition to hand tools, including heirloom handmade carving knives, carvers ripped into the big planks with circular saws to trim off rough edges.

Fred Fullmer, of Kirkland, a Tlingit artist, brought his granddaughter and another member of his dance group along to work on the box drum they hope to use in performing their songs and dances.

They are large, rectangular musical instruments made from a plank of cedar, steamed to bend it into a box shape.

Left open on one side, the box becomes a powerful drum, to be stood on one end, or, traditionally, hung from a rope of twined cedar bark. Struck with a hand or a padded beater, the box drum speaks with a deep resonant boom, louder and lower in tone than a skin drum.

Just carving the drum is fulfilling, Fullmer said, because it connects him with his ancestors.

“When I am carving I get to go through the same experiences they did,” he said. “To me, it is part of the fabric of our culture, it’s not just one thing, standing by itself. It’s all the pieces. The language, the songs, the dances, carving.”

Brandon Mayer, 17, of Shoreline, carefully unwound a canvas tool case to use his grandfather’s carving tools for the first time.

“What a thing to be part of. It’s a real honor to be preserving this art, bringing it back,” said Mayer, who is Haida and Tlingit.

Upper Skagit artist Peter Boome, of Tacoma, usually a print maker, said he was thrilled to have a chance to carve a bentwood box drum for the first time.

Every piece of art is a chance to inspire someone, Boome said. “Complacency isn’t an option.”