By: USDA Food and Nutrition Service,
WASHINGTON, August 5, 2014 – New U.S. Department of Agriculture (USDA) data shows that participants in the Supplemental Nutrition Assistance Program (SNAP) can now purchase fresh fruits and vegetables directly from farmers through more than 5,000 farmers markets, roadside markets and pick-your-own operations across America.  The number of locations where SNAP benefits can be used to purchase food directly from farmers has increased five times since 2008, when there were just 753 such locations.  Also according to USDA data, SNAP participants are taking advantage of these opportunities, redeeming more than $21 million dollars at farmers’ markets and directly from farmers last year. Providing more places for SNAP participants to purchase food directly from local farmers boosts local economies, supports family farmers and helps create more access to healthy foods for SNAP participants, which can help reduce health problems and governmental health costs in the future.
“On average, about 20 cents of every SNAP dollar spent on food ends up in the pockets of American farmers. Allowing families in need to buy food directly from local farmers provides a boost to local economies,” USDA Under Secretary Kevin Concannon said.  “America’s farmers offer a bounty of fresh fruits and vegetables that are the foundation of a healthy diet, and USDA has made it a priority to improve direct access between farmers and SNAP participants over the past several years. Healthy eating reduces health risks later in life, which helps reduce our nation’s health costs over the long run.  This new data shows that these efforts are working to provide farmers with a larger customer base and to provide families who use SNAP with more options to buy healthy food.”
USDA’s Food and Nutrition Service (FNS) has been working to expand the availability of wireless point-of-sale equipment to allow more farmers markets to participate in SNAP.  Launched in January 2014, Marketlink.org is a one-stop information center where farmers markets and farmers can find out how to participate in SNAP and, if eligible, how to obtain SNAP EBT equipment. Installing wireless technology at farmers markets expands the customer base for markets and increases the share of the SNAP dollar that goes directly back to local farmers, strengthening local economies.
SNAP is one of 15 nutrition assistance programs administered at the federal level by FNS. It’s the nation’s first line of defense against hunger and helps put food on the table for millions of low income families and individuals every month.  Nearly half of SNAP participants are children, and 42 percent of recipients live in households with earnings. 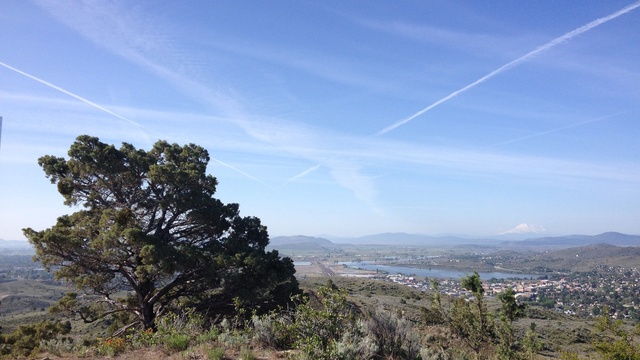 A second straight year of water shutoffs in the arid Klamath Basin is drying up ranchland and forcing many ranchers to sell their cattle early.

But the water woes have created an unlikely alliance that could lead to a historic solution.

Scott White is the Klamath Basin watermaster. He has the difficult task of telling ranchers to turn off the water they use for cattle and crops.

“It was probably one of the hardest things that I’ve ever had to do – it was a terrible feeling,” said White.

This is how it plays out. Those with the oldest rights make a call to the state of Oregon for the amount of water they’re legally granted. Until those amounts are met, the watermaster shuts off so-called junior water users.

“It was extremely difficult when you’re driving up and down doing your follow-up and seeing all those fields dry up and folks aren’t out working the fields,” White said.

In drought years like last year and this year, that means a lot of spigots turned off, a lot of fields going dry.

So who are the senior water users? In the Klamath Basin, it’s two main parties: a group of farmers from a federal agricultural project and the Klamath Tribes.

When project farmers make a call, water is diverted from Upper Klamath Lake to fields of onions, potatoes, mint, horseradish and grains.

Tribal water rights are a different story. Their water is kept in tributaries to the lake rather than going to ranches. That extra water is meant to improve stream health for fishing and gathering on former tribal lands.

Don Gentry, chairman of the Klamath Tribes, says the long-term goal is restoring waterways for the return of salmon. Four hydroelectric dams on the Klamath River have blocked salmon passage for nearly 100 years. 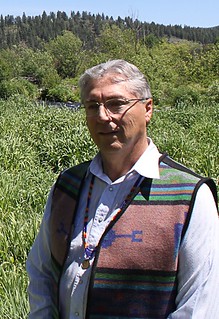 “I’m always aware of the fact that we don’t have salmon up here anymore,” Genry said. “A number of our tribal members, elders, people that have gone on and aren’t with us here today, talk about the importance of those fisheries and where they caught the fish at.”

In the flashpoint summer of 2001, the tribes and farmers were in strong opposition. The government kept water in the river system to support fish while project farmers saw their irrigation water shut off.

The bad blood ran deep — with threats of violence and antagonistic signs lining the highway.

For a long time, the tribes and farmers say they could barely sit down at the same table. Now they’re more united than ever.

Both groups support a bill that would remove the Klamath River dams, stabilize the basin’s water supplies and do wide-scale environmental restoration.

Gentry sees great upsides for the tribes. “We really believe that what we’ve built into this is going to help us immeasurably to restore our fish,” he said.

Greg Addington represents Klamath Project farmers. He says the bill would benefit many Klamath Basin stakeholders who joined an agreement to make it happen.

“This agreement doesn’t make more water,” Addington said. “What it does is it gives people more certainty. So, we’d be knowing early in the season what our amount of water is so that we would avoid involuntary shortages — and that’s really the big thing.”

Addington says the Klamath Tribes made the first move in their partnership. “They were the ones also that came to the table and said, ‘Look, there’s a better way — and a way to share water.’”

Many ranchers were holdouts. They hoped to be awarded the best water rights. When the tribes and the project farmers prevailed, the incentive to stay outside the tent evaporated.

Support for the legislation now includes a majority of those ranchers. So even in a drought year with widespread water shutoffs in the Klamath Basin, there’s hope for a solution.

Experts say that solution would have historical and ecological significance. This includes Michael Hughes, who directs the environmental sciences program at Oregon Institute of Technology in Klamath Falls, Oregon. 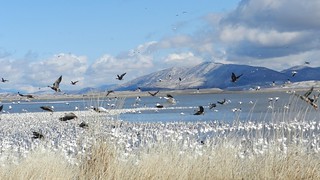 “This has never happened in our country — and to my knowledge it hasn’t happened anywhere in the world,” Hughes said.

He argues that the Klamath Basin’s natural resource challenges are more complex than any in the nation’s history. That includes Chesapeake Bay, the Mississippi River Delta, the Colorado River, or even the Columbia River here in the Northwest.

“Each of them is overshadowed in some way or another by what’s happening in the Klamath,” he said.

Solving the Klamath Basin’s water woes would be a major accomplishment. And even with some momentum, it remains a difficult one.

A related bill was introduced in Congress in 2011, but it didn’t go anywhere. An updated, more economical version — still about a half billion dollars — is headed for a likely Senate vote this year. It carries support from all four of Oregon and California’s senators.

But the hurdle of a divided Congress remains a very real one. Some conservation groups say the bill doesn’t go far enough for parched wildlife refuges in the Klamath Basin. And some ranchers are still fighting in court for better water rights.

In the meantime, watermaster Scott White will keep telling water users to turn off their spigots.

White says he wishes the situation was different — whether through a political solution or even a few more rainstorms.

“If I could put something on my wish-list, the next 10 years would be extremely wet,” White said. “I can’t remember the last time I got a phone call complaining about too much water.”

RIO DE JANEIRO — Pope Francis took on the defense of the Amazon and the environment near the end of his weeklong trip to Brazil, as he donned a colorful Indian headdress Saturday and urged that the rainforest be treated as a garden.

The pontiff met with a few thousand of Brazil’s political, business and cultural elite in Rio de Janeiro’s Municipal Theater, where he also shook hands with Indians who said they were from a tribe that has been battling ranchers and farmers trying to invade their land in northeastern Bahia state.

In a separate speech to bishops, the pope called for “respect and protection of the entire creation which God has entrusted to man, not so that it be indiscriminately exploited but rather made into a garden.”

He also urged attention to a 2007 document by Latin American and Caribbean bishops that he was in charge of drafting, which underscored dangers facing the Amazon environment and the native people living there. The document also called for new evangelization efforts to halt a steep decline in Catholics leaving for other faiths or secularism.

“The traditional communities have been practically excluded from decisions on the wealth of biodiversity and nature. Nature has been, and continues to be, assaulted,” the document reads.

Several of the indigenous people in the audience hailed from the Amazon and said they hoped the pope would help them protect land designated by the government as indigenous reserves but that farmers and ranchers illegally invade for timber and to graze cattle. In fact, grazing has been the top recent cause of deforestation in Brazil.

“We got credentials for his speech and attended so we could tell the pope what’s happening to our people,” said Levi Xerente, a 22-year-old member of the Xerente tribe in Tocantins state in the Amazon, after he attended the pope’s speech. “We hope that he will help intervene with the government and stop all the big public works projects that are happening in the region.”

Xerente, speaking in broken Portuguese, said the biggest threats to Indians in the region were big agribusiness invading land and the government’s own massive infrastructure projects, including the damming of rivers for hydroelectric power generation and roads being carved out of the forest, often to reach giant mines.

Francis thanked Brazilian bishops for maintaining a church presence in the rugged and vast Amazon, which is about the size of the United States west of the Mississippi River. But he pushed church leaders to refocus energies on the region.

“The church’s work needs to be further encouraged and launched afresh” in the Amazon, the pope said in prepared remarks, urging an “Amazonian face” for the church.

He cited the church’s long history of working in the region.

Catholic priests and nuns have taken up the causes of Indians and of poor subsistence farmers in the Amazon, often putting themselves in danger. Violent conflicts over land rights are common in the region, where wealthy farmers and ranchers are known to hire gunmen to intimidate people into leaving land the government has often set aside as reserves for their use.

In 2005, U.S. nun and Amazon land-rights defender Dorothy Stang was murdered by one such gunman in the state of Para. Two ranchers were later convicted of ordering her murder so they could control a parcel of land the government had ceded to a subsistence farming group Stang worked with.