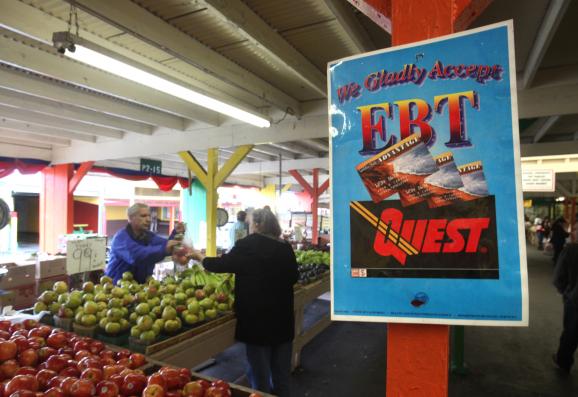 In this photo taken Saturday, Feb. 6, 2010, a sign announcing the acceptance of electronic Benefit Transfer cards is seen at a farmers market in Roseville, Calif.
Credit Rich Pedroncelli / AP Photo

Washington state policymakers are pondering whether to make an end run around looming cutbacks in the federally-funded food stamp program.

This would mimic what Oregon and three eastern states just decided to do.

In 15 states and the District of Columbia, low-income households get extra food stamps if they’re also getting help paying their heating bills. Washington, Oregon and California are among the states running things this way. Idaho does not offer the added benefit.

This winter, Congress tried to trim the ballooning costs of the food stamp program by setting a higher threshold for what’s come to be called “Heat and Eat.” The provision would decrease food stamp benefits for about 100,000 households in Oregon and twice that many in more populous Washington.

Now, Oregon’s governor has approved a restructure to low-income heating assistance to negate the federal policy change. And Washington Gov. Jay Inslee says his state is discussing the same.

“We’re going to look at anything we can do, but that’s not going to get done today,” he said.

The trim back of food stamp benefits doesn’t take effect until the fall here. A recent editorial in the Wall Street Journal gave voice to fiscal conservatives by rebranding the Heat and Eat benefit, “Cheat and Eat.”

Congressional negotiators booked $8.6 billion in savings from tightened eligibility for food stamp benefits over the next decade. Because of the state workarounds, those savings are now in doubt.

In Oregon, the avoided decrease to food stamp benefits averages around $58 per month per household. In Washington and California, the average cutback per household is a little bit higher.

Once again, Congress is taking steps to slash funding for SNAP—the federal Supplemental Nutrition Assistance Program, commonly known as Food Stamps—as nutrition experts and tribal advocates fear that Native Americans’ use of the program and its usefulness to them is being ignored in the overall debate.

“Many tribal communities are food deserts and SNAP cuts will only double the hardship some face to get access to food,” said Jim Roberts, a policy analyst with the Northwest Portland Area Indian Health Board. “Generally, tribes are focused on preserving and protecting [Bureau of Indian Affairs] and [Indian Health Service] programs. Thus, the program does not have a strong advocate to speak up for it.

“Tribal health directors feel the current debate on deficit reduction and the effects of food sequestration have and will continue to have a negative impact on SNAP,” Roberts added. “Nutrition programs on reservations are already underfunded. The programs in many instances are the primary source of food for Indian families and their children.”

Congress isn’t hearing Indian voices on this issue, said Craig Gunderson, a University of Illinois professor who has conducted studies and reported on American Indian use of federal food programs.

“Unfortunately, while there is lots of coverage of SNAP, I haven’t seen as much regarding American Indians within current debates,” Gunderson said. “This is unfortunate because, insofar as American Indians have some of the highest food insecurity rates of any group in the United States, they have the most to lose.”

The situation is so acute that Chris Stearns, the chairman of the Seattle Human Rights Commission, regards it as a major human rights issue. “The USDA reports that among households with children, nearly twice as many Native households are food insecure than among non-Native households (28 versus 16 percent),” he noted. “The right to food is a basic human right covered in Article 11 of the International Covenant on Economic, Social and Cultural Rights. In addition, Article 24 of the U.N. Declaration of the Rights of Indigenous Peoples provides that indigenous people have an equal right to the enjoyment of the highest attainable standards of physical and mental health. The right to food is inherent in that broader right.”

In June, House Republican leaders failed to pass a farm bill that would have included large food-stamp program cuts after the GOP passed an amendment to institute work requirements. The bill included a 3 percent cut to the $80 billion-a-year nutrition program.

Sixty-two Republicans joined Democrats in voting against the House bill, prompting Speaker John Boehner during a later closed meeting of House Republicans to say he was “pissed off,” a remark that was widely reported in the press.

The Senate passed a farm bill last month with a smaller cut to food stamps of one-half of one percent with widespread Democratic and Republican support.

After the embarrassing defeat, Republican leadership in the House worked feverishly to pass a farm bill that would not include food stamps at all, wanting to leave that debate for another time. In a floor vote on the evening of July 11, the vote was narrowly successful, 216-208, with no Democrats voting for it and with 12 Republicans opposing.

If there is a bright spot in the current crisis, it is that the Food Distribution Program on Indian Reservations, a federal program that provides U.S. Department of Agriculture foods to low-income Indian country-based households, appears safe for now. That program served approximately 80,000 individuals per month in fiscal year 2011, according to administrative data.