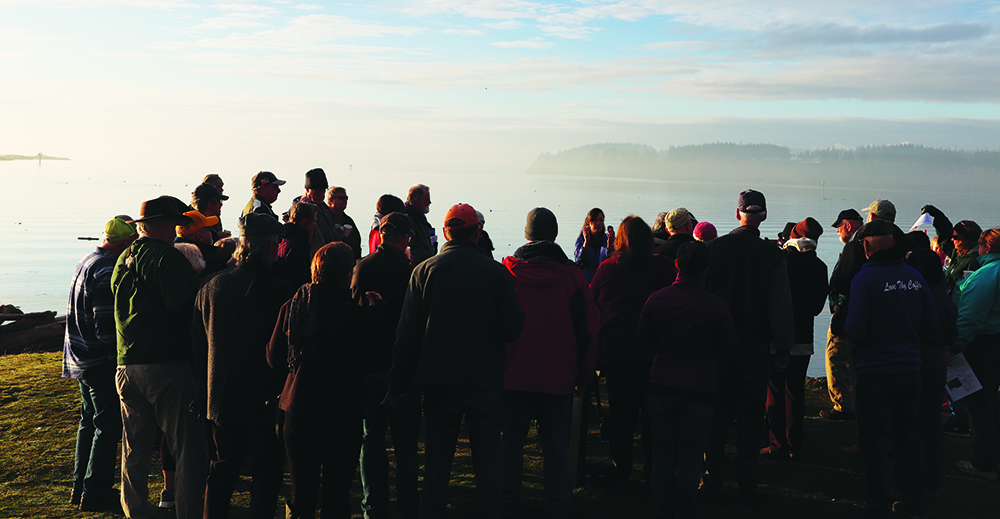 Crowd gathered at Flintstone Park in Oak Harbor to view the king tide.

Bright and early on the morning of January 25, a gathering of about thirty people met at Flintstone Park in Oak Harbor. Similar to Tulalip Bay, the waters of the Salish Sea travel into the inlet of Whidbey Island, providing a scenic view for the citizens of Island County. This morning in particular was gorgeous. While the sun emerged into the sky, fog slowly ascended from the water that was now approaching the paved boardwalk of the park. This was the event the locals came to witness, a king tide.

On the night of January 20, you may have caught a glimpse of the super blood wolf moon as the sun, earth and moon aligned perfectly. This rare lunar eclipse is also known as syzygy and causes a stronger gravitational pull and therefore, higher tides. At an estimated thirteen feet, the tide was highest at 8:28 a.m. in Oak Harbor that Friday morning. The long stretch of sand, rocks and driftwood that makes up the beach of Flintstone Park appeared to have vanished as large waves splashed against the coast.

“King tide is not a scientific term, it simply means higher than our normal everyday tides,” explained Bridget Trosin, of Washington Sea Grant, to the crowd. “In this area, we get king tides usually in November, December, January and February. One of the situations where we get a king tide is at a perigee tide. Basically that is when we orbit the sun and as the moon passes in that close section we get higher than high tides. As the moon is hugging the earth in its orbit, it’s bulging out our ocean waters.

“The other situation is when we have a nice alignment of the sun, earth and moon, that’s where we see a nice king tide from the pull from the sun and the pull from the moon as they’re compounding upon each other. And another event happens only on January 2. That’s as Earth is orbiting around the sun, we’re closer and that creates pull from the sun and makes our tides a little larger than normal. Any one of those situations can happen at the same time and each one gives the tide a directional pull.” 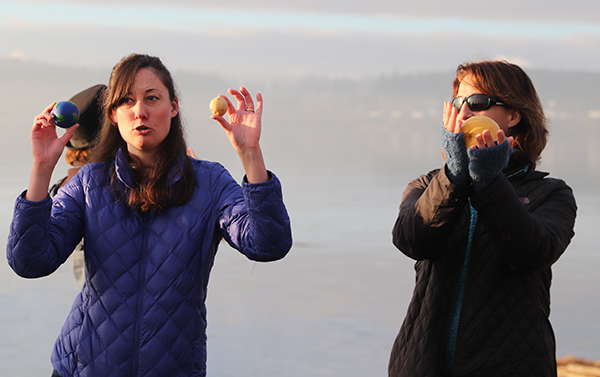 Now that the Oak Harborites acquired both a better understanding as well as a live visual of a king tide, Bridget requested that each member of the group download an app to their phones called MyCoast. The purpose of the app is to measure king tides at local shores by using user submitted photos. She then stressed that king tides are an important occurrence and the need to monitor them is crucial because they give us a glimpse into the future of what normal, or perhaps even low tides, might look like in a few decades due to sea-level rise.

Rising sea-level is a complex topic that will in time impact the entire planet. Many major cities across the world will experience severe flooding and in some extreme cases will be underwater completely. Because sea-level rise is so dynamic and there are several factors in play, it’s hard to determine exactly when specific areas will begin to see major impacts. However, the general consensus appears to be that sea-level will continue to rise at about its current rate until the middle of this century and then will actually accelerate at even a faster pace after that.

So what causes sea-level rise exactly and why should you be concerned? Since the Industrial Revolution in the 1800’s, the Earth has been heating up due to the burning of fossil fuels and the production of greenhouse gases. As the planet traps those emissions in its atmosphere, the warmer Earth gets. And as a direct result of global warming, the amount of water in the ocean is increasing because as water heats, it expands. Another large contributing factor to sea-level rise is the melting ice caps and ice sheets happening in both Greenland and Antarctica.

“Sea-level has risen eight or nine inches in the last hundred years and it’s accelerating,” says Phillip North, Tulalip Natural Resources Conservation Scientist. “Since global warming is happening faster than we expected, that means the water is getting warmer faster and expanding. We’re getting more sea-level rise than expected. Plus, the warmer ocean is melting the ice faster. Greenland is melting faster, Antarctica is melting faster, all the continental glaciers; everything’s melting faster than we expected. We’ll see a pretty steady progression up until the middle of the century and then it will start to speed up. It does seem that anytime anyone has ever said something like that, it’s happened sooner than expected and more than expected. We are already seeing it.”

Shortly after the King Tides event in Oak Harbor, and we’re talking merely a few hours, reports from major news sources were released. Alerts from the New York Times, BBC News and CNN began to pop-up onto people’s smartphones claiming that Greenland’s ice caps are indeed melting at an even much faster pace than predicted by scientists, environmentalist and conservationists.

The news was shocking to say the least and sent social media into a bit of a frenzy. The reports show ice caps in Greenland’s southwest region have been melting at least four times faster in the past decade than they have over previous centuries. Due to the combination of global warming paired with oscillation, a weather phenomenon that affects air temperature, Greenland’s ice caps are not only breaking off into large icebergs, which over time melts into the ocean, but are also beginning to thaw at the top of the glaciers which is causing ‘rivers’ of meltwater to pour into the ocean, and is subsequently melting more ice as it travels down the glaciers. Cities along the east coast of the United States will be the first to be affected and will see significant sea-level rise and are also now susceptible to more hurricanes.

Northwest tribal nations have been anticipating a rise in water for at least a few generations now. As coastal communities, Salish tribes are one the first to feel and witness the effects of sea-level rise. As you may recall, the Quinault tribe is currently in the early process of relocating both of their entire villages of Taholah and Queets because rising sea-level and high tides have already begun to flood the communities.

As sea-level rises, it has the potential to change entire landscapes. In a report released in the summer of 2018, the Projected Sea Level Rise for Washington State, evidence shows that because of the Juan de Fuca tectonic plate, many Puget Sound communities are currently sinking while Neah Bay’s land is actually rising.

In addition to inundation and landform change, another huge impact sea-level rise will have on tribal communities is habitat loss, reducing marshes, mudflats and intertidal habitats. Habitat loss can cause significant changes to the food chain and as Phillip explains, this happens due to the erosion of coastlines. 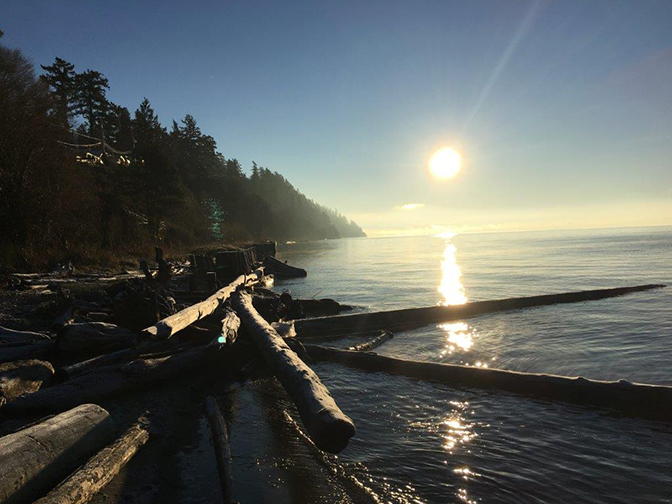 “One thing we are studying in Tulalip is our outer coast,” he states. “Because as sea-level rises, a couple things will happen. One, the water will be at base more often and it’s the water at the base of the bluff that erodes the bluff more than anything else. But also because it will be higher than the storms that are coming in. When storms come in, you have the distance over open water that the winds are blowing, the greater the distance the bigger the waves. But also the deeper the water, the less those waves are dragging on the bottom of the ocean floor and losing energy. So the deeper the water is, those bigger waves will come further in and hit the bluff more often. So you end up with faster erosion. As it erodes faster, that means that all the material is coming down faster.

“That material is what makes up the intertidal habitat. So how will the system deal with that, that’s another important question. That’s where all the clam beds, juvenile crab are and that’s where all the juvenile salmon and forage fish hang out. The dynamics of the energy of the waves on the beach sorts all that material, so you end up with patches of fine sand and gravel. All of those different patches are different type of habitat, so if you change the energy on the beach, those things all change. Those changes of energy change the habitat. Most of the detrital food chain are not eating the grass and seaweed directly but they’re eating it when it dies and starts to decay – that’s the base of a food chain. The way the detrital material gets distributed changes the habitat for juvenile crab, juvenile salmon, forage fish and all those organisms that live in those areas.”

Unfortunately, sea-level rise is inevitable. Yes, you read that correctly. In time, which is proving to be closer than we thought, all of the ice caps will melt and the world’s water to land ration will increase. How much it will increase and when is still yet to be determined but if the recent news of Greenland’s ice caps are any indication, scientists are predicting by the year 2100, cities around the globe can see anywhere from three to ten feet of sea-level rise. And although the east coast will probably see the effects on a larger scale, the entire west coast along the Cascadia subduction zone could be pushed back, making many current coastal cities uninhabitable. Researchers are hoping communities can look at these statistics and estimations to plan for relocation if need be and to prepare for a series of natural disasters such as extreme floods, storms and hurricanes that could result from sea-level rise.

Please visit www.WAcoastalnetwork.com to view the most recent reports and projections of sea-level rise in Washington. And be sure to check out the National Oceanic and Atmospheric Administration Sea-Level Rise Viewer at www.coast.noaa.gov/slr/ to see how sea-level rise, of up to ten feet, can impact your communities, as well as for additional information.