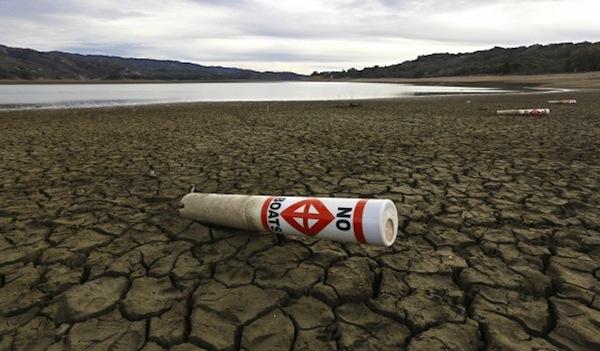 Rich Pedroncelli/Associated Press
The dried-out bed of Lake Mendocino, California, in February 2014. The state is gripped in its worst drought in recorded history, and a new study has found that climate change is to blame.

It is no secret that American Indian communities are at the forefront of climate change. From low-lying nations facing sea-level rise, to villages located on melting permafrost, to drought-plagued lands, these are some of the more dramatic examples of American Indian tribes that are taking a direct hit from extreme weather events likely linked to climate change. Although several tribes, including some on this list, are already adapting or laying out plans for the inevitable, this list highlights those that are seeing dramatic, tangible changes.

RELATED:  8 Tribes That Are Way Ahead of the Climate-Adaptation Curve

The Hoh road to the beach has washed out, and the ocean has destroyed the homes that once lined their beach. In 2009, Hog tribal officials told a U.S. Senate Indian Affairs Committee hearing in Washington, D.C., that they face constant threats from floods and the Hoh River.

Seaside villages up and down the Pacific coast are at risk, from rising sea levels. Some stark evidence of this came with the recent state of emergency declared by the Quinault Indian Nation. Earlier this year, its headquarters in Taholah faced an increasingly dangerous situation with sea level rise and intensified storms. The situation came to a head with the breach of a sea wall that caused serious damage.

Climate Change Is Real, Let’s Fight It Together

The Quileute are squeezed on a sliver of land between the Pacific Ocean and the Olympic National Forest. Rising sea levels and a river’s changing course through the reservation has exacerbated not only fears of flooding, but also of what could happen if an earthquake occurred powerful enough to wreak the damage that was seen in Fukushima, Japan, in 2011. Just a couple of years ago a tribal school attended by 80 children was just a foot above sea level. A powerful storm surge threw car-sized wood trunks into their schoolyard. But now the Quileute are relocating an entire village.

Quileute Is Moving to Higher Ground

Along Alaska’s northwestern coast, melting sea ice has reduced natural coastal protection. Increased coastal erosion is causing some shorelines to retreat at rates averaging tens of feet per year. In Shishmaref and Kivalina, Alaska, severe erosion has caused homes to collapse into the sea, according to the Environmental Protection Agency, forcing these Alaska Native Village populations to relocate in order to protect lives and property.

“Climate change is slowly tipping the balance in favor of more frequent, longer lasting, and more intense droughts,” states the 2013 Assessment of Climate Change in the Southwestern United States (SWCA). The Navajo Nation is a prime example, with a drought that pre-dates the one that has crippled parts of California. From runaway sand dunes, to dying horses, the Navajo Nation is suffering from a lack of water.

The Agua Caliente, hit last year by wildfires, got the double whammy after the charred remains of its Indian Canyons became prone to flash flooding, forcing their closure for several months.

Sea level rise is washing away the land of this small tribe in Louisiana. The Biloxi-Chitimacha moved to the Isle de Jean Charles on the Gulf Coast in the 1840s and made a way of life there. The island—along with the rest of Louisiana’s coastline—is disappearing into the Gulf of Mexico at a speed almost visible to the eye, reported Truthout in April.

“There was land on both sides of the bayou,” tribal member Chris Chaisson told Truthout. “Now, it’s just open sea.”

While the tribe faces a multitude of problems, sea level rise remains at the root of the tribe’s most pressing.

An April 2014 study by scientists at the Utah State University has linked this year’s California drought to global warming, the Associated Press reported. That brings us to two tribal nations that issued drought state of emergencies. The Yocha Dehe Wintun Nation declared a drought emergency in April, calling upon its members to cut their water use by 20 percent.

Tribal chairman Marshall McKay put out a statement that said, “The drought threatens how we eat and drink everyday, how we manage our businesses, how we protect our environment and how we plan for our families’ futures.”

The Hoopa Valley Tribe had declared a drought state of emergency two months before the Yocha Dehe, in February. The Hoopa began formulating a drought mitigation plan that would plan out water use for three to five years, with measures such as storing water from the mountains that is currently not being tapped, beefing up fire prevention initiatives and shoring up backup water systems.