Skip to primary content
Skip to secondary content
Press Release, U.S. Senator for Montana Jon Tester
(U.S. SENATE)—Senator Jon Tester released the following statement after the U.S. House of Representatives voted to reauthorize the Native American Housing Assistance and Self-Determination Act (NAHASDA), an initiative that awards block grants for tribes and tribal housing authorities in order to make investments in housing in Native American communities.
“Today we are a step closer to addressing the lack of housing in Indian Country, and it’s critical the Senate now reauthorize these initiatives as quickly as possible,” Tester said.  “There is nothing that impacts Native American communities more than the absence of housing.  I look forward to working with my colleagues in the Senate on this reauthorization which helps address the acute housing needs in Indian Country.”
Last week Tester, Vice Chairman of the Senate Indian Affairs Committee, pushed to increase the resources for Native American housing during a Senate Indian Affairs Committee hearing.
Through NAHASDA, the Department of Housing and Urban Development grants funds to tribes and tribal housing authorities to construct, acquire, or modernize housing for low income families. These funds represent the main source of housing assistance in Indian Country. 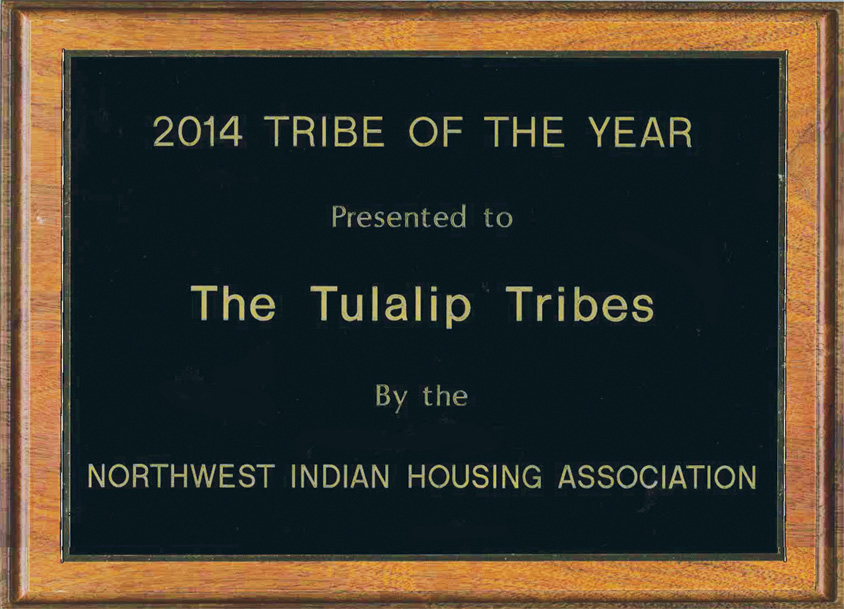 Voted on by peers and all other tribal authorities in the northwest, Tulalip Tribes received this award in part for their innovative efforts in working strategies to deal with meth in Housing, creativity in collaborating with tenants on combating mold and mildew in homes, ‎and the increased effort to efficiently get boarded up homes rehabilitated and rented.

A strong and proactive stand was taken by the Tulalip Tribes to ensure that low-income rental families are living in homes free and safe from methamphetamine contamination. Every vacant unit was tested and remediated as needed. Adults on the waiting list and adults moving into new units must now pass drug tests prior to being able to be housed. This system has proven itself to be beneficial to the overall health and welfare of the community.

The Tribe’s efforts and implementation strategies to provide safe, drug free housing to the community is highly commendable. The extensive rehabilitation measures needed to make homes safe and healthy places to live was a considerable investment by the Tribe.

The Tribe’s significant policy commitment and financial support makes the success of this initiative possible. Eleven members of the Housing Department’s Maintenance/Construction team received extensive training in CDL remediation and through the support and investment of the Tulalip Tribes, received their State certification. These staff members are now qualified as both workers and supervisors to remediate methamphetamine contamination.

Environmental exposures in homes are linked to respiratory health concerns in children. Disproportionate rates of pediatric asthma and respiratory tract infections occur in tribal communities. Tulalip Tribes innovative policy on mold and mildew, annual structural inspections, and education and outreach with their residents, including policy changes partner- shipping with residents to limit mold growth has improved the quality and life of housing stock. The policies on mold and mildew introduced in Tulalip are now being widely shared and used with other Tribes.

Due to both meth contamination and mold issues Tulalip had a significant number of vacant units. Tulalip Tribe invested in its Housing program by hiring an additional 12 temporary workers to fully restore the units and get them re-rented. Within an 8-month period Tulalip Tribes were able to restore over 70 of their vacant homes and have significantly lowered the number of boarded up housing units.

According to their website, NWIHA.org, North West Indian Housing Association consists of 38 Tribes, Tribal Housing Authorities and/or Tribally-Designated Housing Entities serving 3 Pacific Northwest states (and one THA in Southern Alaska). The Mission of the Northwest Indian Housing Association is to promote safe, sanitary, decent and affordable housing for Tribal members in the Pacific Northwest.

The U.S. Department of Housing and Urban Development (HUD) today awarded $563 million to 353 American Indian and Alaskan Native entities that represent 539 tribes across the U.S.  The funds, made available through HUD’s Indian Housing Block Grant  Program, are distributed annually to eligible Indian tribes or their tribally designated housing entities for a broad range of affordable housing activities.

“Hardworking American families in tribal communities should be able to live in communities where they have a fair shot to reach their potential,” HUD Secretary Shaun Donovan said in a press release. “The resources provided today will give these tribal communities the tools to maintain quality housing, prevent overcrowding, improve public safety and provide other basic building blocks of security and success.”

Indian Housing Block Grant funds primarily benefit hardworking families living on reservations or in other Native American communities, who don’t have the financial resources to maintain good homes, schools, or other key contributors to economic security. The amount of each grant is based on a formula that considers local needs and housing units under management by the tribe or designated entity.

Indian communities can use the funding for a variety of housing activities, including building affordable housing; providing assistance to existing housing that was developed under the Indian Housing Program authorized by the U.S. Housing Act of 1937; or other activities that create new approaches to provide more affordable housing for Native Americans. The funding is also used to offer housing services to eligible families and individuals; and establish crime prevention and safety measures. The block grant approach to housing was established by the Native American Housing Assistance and Self Determination Act of 1996.