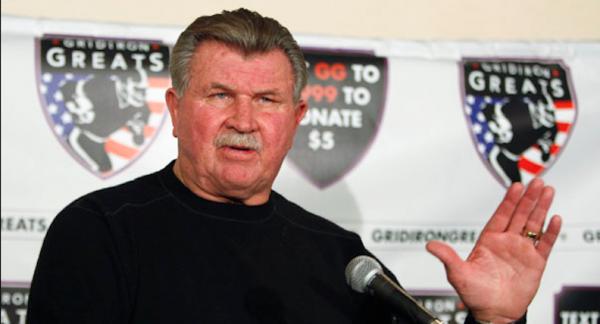 ESPN analyst and former Chicago Bears head coach Mike Ditka isn’t falling in line with the growing number of sportscasters, journalists and sundry public figures who refuse to use the name of the Washington NFL team. Instead, he says people who oppose the team’s name are “asinine.”

“What’s all the stink over the Redskin name?” Ditka said during an interview with Mike Richman of RedskinsHistorian.com. “It’s so much [expletive], it’s incredible. We’re going to let the liberals of the world run this world. It was said out of reverence, out of pride to the American Indian. Even though it was called a Redskin, what are you going to call them, a Proudskin? This is so stupid it’s appalling, and I hope that owner keeps fighting for it and never changes it, because the Redskins are part of an American football history, and it should never be anything but the Washington Redskins. That’s the way it is

“It’s been the name of the team since the beginning of football,” Ditka added. “It has nothing to do with something that happened lately, or something that somebody dreamed up. This was the name, period. Leave it alone. These people are silly — asinine, actually, in my opinion.”

Ditka continued to berate all those who oppose the name – a group that includes high-ranking individuals like Hillary Clinton, Keith Olbermann and former Washington player Champ Bailey.

“It’s all the political correct idiots in America, that’s all it is,” Ditka said. “It’s got nothing to do with anything else. We’re going to change something because we can. Hey listen, I went through it in the 60s, too. I mean, come on. Everybody lined up, did this. It’s fine to protest. That’s your right, if you don’t like it, protest. You have a right to do that, but to change the name, that’s ridiculous. Change the Constitution — we’ve got people trying to do that, too, and they’re doing a pretty good job.”

CBS Sportscaster Phil Simms, who will call Thursday Night Football games beginning September 11, said Monday that he is hesitant to use the name of the Washington team and is sensitive to the complaints about the name. “My very first thought is it will be Washington the whole game,” Simms told The Associated Press.

RELATED: 10 ‘I’m so Redskins’ Tweets that Explain Why RedskinsFacts.com Is so Wrong

Simms said he is not taking sides in the contentious debate, but that once he thought about the name his conscience kicked in. “I never really thought about it, and then it came up and it made me think about it,” Simms added. “There are a lot of things that can come up in a broadcast, and I am sensitive to this.”