Five-year-olds who consume four or more sodas daily are more than twice as likely to attack others, fight with them or destroy their property, according to findings from a study by the Children’s Hospital Medical Center, published August 16 in the Journal of Pediatrics.

Many studies have confirmed a relationship between adolescents’ soft drink consumption and aggression, depression and suicidal thoughts; but this is the first time scientists have identified this association between soda and young children.

Can Drinking Soda Give You Cancer?

And the New Mountain Dew Flavor Is … Diabetes?

The long-term effects of soda consumption manifest in adults, who suffer from diabetes, obesity, stroke, depression, tooth decay, and all kinds of ailments—also linked to poor diet and processed junk foods heavy in salt, preservatives and color additives. These types of foods provide little to no nutritional value. Processed foods and sugary drinks are making this country unhealthy.

It’s common knowledge that soda, diet soda, energy drinks and other “liquid refreshments” are chock-full of sugar, caffeine, and color additives. But what about juice?

I once gave my babies sweet, sugary apple juice in their bottles, thinking it was good for them. Apples are a fruit, aren’t they? Fruits are good for you, right?

For years, I drank what I thought was a healthy tonic daily of V-8 vegetable juice, the juice of one-half lemon (way too much) and a couple of drops of Worchestershire sauce. My dentist said that probably accounted for the substantial loss of enamel on my teeth.

There just isn’t a drink much better for you than water. Good ‘ol water instead of soft drinks and other liquids.

One of the first things the New England settlers noted about the indigenous peoples of Turtle Island was that they typically drank water—cold or hot, and oftentimes flavored. The Ojibwa (Chippewa) of the western Great Lakes typically boiled their water with vegetables, twigs and leaves, explains Frances Densmore in her 1974 book How Indians Use Wild Plants for Food, Medicine and Crafts.

Following in the footsteps of our ancestors, here are some tips to spice up your water and make it your go-to thirst quencher:

Keep a large jar in the fridge filled with water and fruit for flavor. Try lemon, orange, watermelon, peaches, or even herbs. I like cucumber, fresh ginger and mint! The taste is subtle but refreshing, and a nice break from the ordinary.

The Iroquois regularly prepared blackberry-infused water, particularly in winter with dried blackberries. It was believed to frighten away the cold, Densmore writes in her book.

RELATED: The Original Finger Food (All about berries; includes the recipe for Dale’s mouth-watering Strawberry-Rhubarb Slump.)

For something sweet, make a refreshing drink with organic maple syrup. It is said that the original ice cream cone was simply maple syrup poured over snow that was stuffed into a birch bark cone.

Dale Carson, Abenaki, is the author of three books: New Native American Cooking, Native New England Cooking and A Dreamcatcher Book. She has written about and demonstrated Native cooking techniques for more than 30 years. Dale has four grown children and lives with her husband in Madison, Connecticut.

MARYSVILLE — The Marysville School District’s free summer meals for kids 18 years and younger is already underway at seven locations throughout the town.

Adults may also participate, at a cost of $1 per snack and $2 per lunch, while all children receive their snacks and lunches for free.

Snacks and lunches will be provided Mondays through Fridays, from now though Aug. 23, at the following locations:

• Cascade Elementary, Liberty Elementary and Shoultes Elementary will serve snacks from 9:30-10 a.m. and lunches from 11:30 a.m. to noon.

• The Westwood Crossing Apartments will serve lunches from noon to 12:30 p.m. and snacks from 2-3 p.m.

• The Cedar Grove Apartments will also serve lunches from noon to 12:30 p.m. and snacks from 2-3 p.m., but on Tuesdays and Thursdays only.

By Agriculture Under Secretary Kevin Concannon
Children need access to healthy food all year long, because good nutrition provides the sound foundation they need to learn, grow and thrive. As USDA’s Under Secretary for Food, Nutrition and Consumer Services, it pleases me to say that during the regular school year, America’s schoolchildren can depend on the science-based nutrition provided by National School Lunch Program meals and the healthy choices now available at school. But when school is out during the summer months, it’s another story. Many kids don’t have access to even one nutritious meal a day.
USDA’s summer meals programs work to reach those children by providing free, nutritious meals at sites throughout the nation. Unfortunately, millions of eligible low-income children are still missing out. That’s pretty clear when you stop to consider that although about 21 million children nationwide receive free and reduced-priced meals through the National School Lunch Program during the regular school year, only about 3.5 million kids are reached through our summer meals programs.
Job one is to make sure that eligible children get information about the program. Summer feeding sites are located in many communities across the country, especially in low-income areas. USDA needs your help to get the word out and connect eligible kids with summer meals. Schools, community groups, and religious organizations can help with this effort. To find a summer meal site serving children in your community, call 1-866-3-Hungry or 1-877-8-Hambre or visit the National Hunger Clearinghouse resource directory.

If you or your organization is interested in helping us get the word out about summer meals, please visit the Food and Nutrition Service Summer Food website, www.summerfood.usda.gov, for more information and resources. The SFSP toolkit, available in both English and Spanish, includes templates, customizable flyers, door hangers, letters to parents, activity sheets for children, and attendance certificates. Promising practices and tips for success are also available on the website.
You can help other ways, too. While providing children with nutritious meals is our top priority, the key to success is keeping kids coming back to the sites throughout the summer.  Offering fun, age-appropriate physical activity at summer meal sites is a proven way to ensure attendance and encourage healthy habits.  And that takes volunteers – LOTS of them – especially in June, July, and August. Volunteers can help with basics, like transporting food, setting up or cleaning up a site. Volunteers can also plan and lead educational or recreational activities with the children. Go to www.serve.gov/endhunger to find an opportunity to volunteer in your community or to post a volunteer opportunity if you operate a summer meal program. 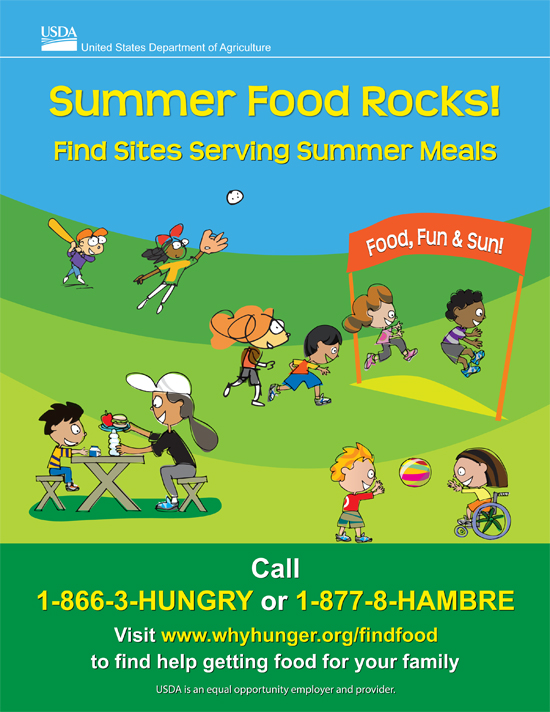