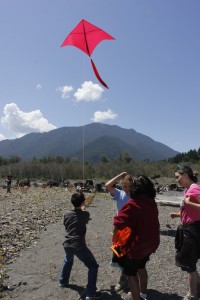 Campers from NatureBridge Science Camp fly a kite over the former Lake Aldwell, with a camera attached to the flyline.

Lower Elwha Klallam Tribe youth collected data for the U.S. Geological Survey by flying a kite over the Elwha River this summer.

As part of a science-based summer camp focusing on the Elwha River restoration project, the kite was collecting data about the ever-changing Lake Aldwell delta. The red kite had a small digital camera attached to the fly line, set up to take pictures of the ground below every three seconds.

The USGS is collecting aerial photos to document the rapidly changing deltas of the Elwha River during removal of the Elwha and Glines Canyon dams, said KC Nattinger, a field science educator with NatureBridge, a Lake Crescent-based science education camp.

“It’s a great project for the kids since it allows them to participate in a science experiment in an area that they are culturally tied to,” Nattinger said.

In addition to flying kites, the kids took water quality samples, explored old tree stumps and driftwood, and learned about the tribe’s cultural ties to the river.

Klallam language teacher Harmony Arakawa talked about rediscovery of the tribe’s creation site. It had been under Lake Aldwell reservoir for a century until the Elwha Dam was removed last summer, draining the reservoir.

Wendy Sampson, another Klallam language teacher, told the kids they are in the middle of history and are collecting stories that they will share with future generations.

“You kids are part of history,” she said. “You were some of the last kids whose picture was taken in front of the Elwha Dam before it came down.”

The stories passed down by older generations explaining how the river has changed has been backed by the science taking place on the river recently, Sampson said.

“These stories aren’t just stories,” she said. “We’re seeing evidence of the stories that our elders have told us.”