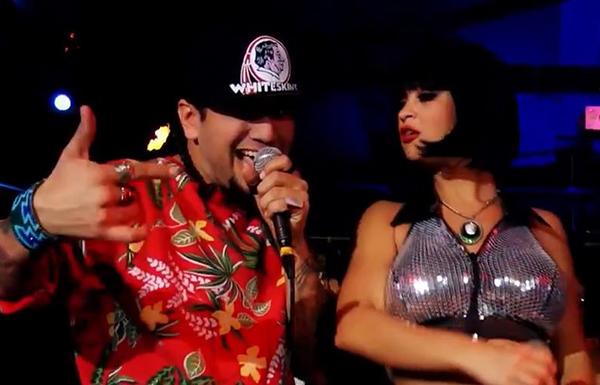 When Native hip hop act LightningCloud, which consists of MC Redcloud, Crystle Lightning, and DJ Hydroe, won the East vs. West: Battle for the Best contest back in March, the true prize was the chance to record a track with hip hop mastermind Timbaland. As a producer, Timbaland has been responsible for chart-topping hits by Justin Timberlake, Nelly Furtado, and Aaliyah, and left his mark on instant hip hop classics like “Dirt Off Your Shoulder” by Jay-Z and “Get Ur Freak On” and “Work It” by Missy Elliott.

The fruit of the LightningCloud-Timbaland sessions is “Sake Bombs” (available as a free download at LightningCloud’s SoundCloud page) — here’s the official video:

The clip was filmed at The Gas Lamp restaurant in Long Beach. To stay up-to-date on LightningCloud’s further adventures, visit facebook.com/LightningCloud1491.